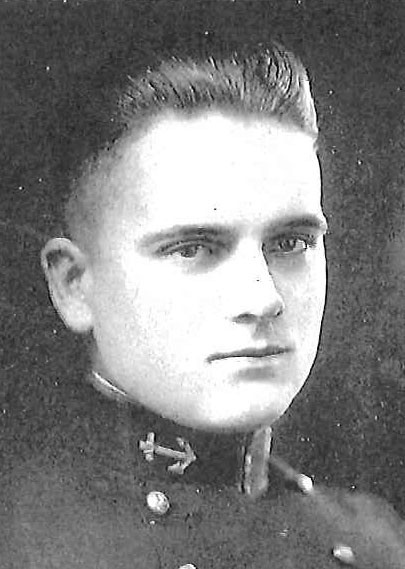 Charles John Cater was born in Anniston, Alabama, on August 20, 1900, son of Hanson L. and Mildred (Houser) Carter. He attended Alabama Presbyterian College and Marion (Alabama) Institute, prior to his appointment to the US Naval Academy, Annapolis, Maryland, from the Fourth District of his native state in 1918. As a Midshipman he was a member of the Rifle Team and participated in class swimming. Graduated and commissioned Ensign on June 3, 1922, he subsequently advanced in rank to that of Captain, to date from June 21, 1942. He was transferred to the Retired List of the US Navy on November 1, 1952, and advanced to the rank of Rear Admiral on the basis of combat awards.

Following graduation in June 1922, he remained at the Naval Academy for duty with the Navy Rifle Team, participating in September in the National Rifle Matches at Camp Perry, Ohio. Ordered to Destroyer Squadrons, Atlantic Fleet, he reported in November 1922 aboard USS Bruce, and between July and December 1922 had instruction in torpedoes at the Navy Torpedo Station, Newport, Rhode Island. Rejoining Bruce, he served in her until March 1924, when he transferred to USS Nokomis, on survey duty.

Detached from the Nokomis in June 1926, he returned to the United States for submarine training in USS Chewink, training ship at the Submarine Base, New London, Connecticut. Completing his instruction in December 1926, he then joined  USS 0-10, operating with Submarine Division Eight based at Coco Solo, Canal Zone. From July 1928 to May 1929 he attended a course in diesel engineering at the Postgraduate School, Annapolis, Maryland, and continue his instruction at various places including Pennsylvania State College, where he received the degree of Master of Science in 1930.

In September 1930 he reported aboard  USS-S19, and a month later transferred to USS S-22, operating with Submarine Division Seven, Submarine Force based at Pearl Harbor, territory of Hawaii. He continued to serve in that undersea craft until August 1931, when he joined the staff of Commander Submarine Division Seven, as Division Engineer officer. He commanded  USS S-26 from September 1932 until January 1933, and following a month’s assignment in USS Seagull, became Assistant Naval Inspector and later Acting Inspector at the Electric Boat Company, Groton, Connecticut, during a period when radical changes were being made in the design of submarines.

In August 1935 he was charge of fitting out USS Shark, the first all welded, all electric-drive submarine, building at the Electric Boat Company, Groton. He assumed command of the Shark upon her commissioning, January 25, 1936, and when relieved of that command in May 1939, reported as Design Superintendent in the Planning Division, Navy Yard, Mare Island, California, where he took an active part in the design of submarine the new submarine tenders, such as USS Fulton, and submarine rescue vessels. Returning to duty afloat in June 1942, he joined USS Tuscaloosa as First Lieutenant and Damage Control Officer, and was aboard that vessel operating on neutrality patrol at Hvalfjord Harbor, Iceland, when the United States entered World War II, December 8, 1941. From February 1942 until October 1943 he served as Aide and Flag Secretary on the staff of the Commander in Chief, US Atlantic Fleet, and for “exceptionally meritorious conduct…. (in that capacity) during the period February 3 to October 1, 1943…” he was awarded the Legion of Merit. The citation continues in part:

“…. Captain Cater rendered invaluable assistance in the preparation and dissemination of orders and policies relative to the organization of the Atlantic Fleet for convoy escort and anti-submarine warfare. In addition to aiding to the development of a sound doctrine and the establishment of training facilities throughout the Fleet, he contributed materially of the formulation of plans for participation of the Atlantic Fleet in the occupation of Morocco and Sicily”.

He next commanded Destroyer Squadron Sixteen, with additional duty in command of Destroyer Division Thirty One. For outstanding service while in those command, he was awarded the Bronze Star Medal, a Gold Star in lieu of the Second Legion of Merit, a Gold Star in lieu of the Third Legion of Merit, and also received a Letter of Commendation, with authorization to wear the Commendation Ribbon, from the Commander in Chief, US Atlantic Fleet. The citations follow in part:

Bronze Star Medal; “For meritorious achievement…engaged in convoy escort duty in the Central Mediterranean on the night of November 6-7, 1943. When a screening destroyer and two troop-laden transports were torpedoed by heavy enemy aerial attack, Captain Cater skillfully directed the ensuing rescue operations, promptly effecting measures to avert the imminent danger of under-seas attack and capably taking charge of salvage efforts and the recovery of survivors… Ably disposing the ships ay his command in sturdy defense of stricken and immobilized vessels, (he) was directly instrumental in the rescue of several thousand survivors….”

Gold Star in lieu of Second Legion of Merit:  “For exceptionally meritorious conduct….. in action against enemy forces during advanced operations in support of the Allied Armies in Italy, from May 15 to August 5, 1944. Skillfully directing the operations of his ship from the time of the Army’s break-through to the Anzio Beachhead and through the coastal advance northward, Captain Cater directed successful shore bombardments against enemy concentrations and installations; protected Allied coastal shipping lanes against enemy submarine and surface attacks; and supported advance mine-sweeping formations engaged in clearing heavily mined approaches to ports occupied by our forces despite repeated hostile aerial attacks… (He) rendered invaluable assistance to the Allied armies in overcoming enemy resistance in their advance into northern Italy…”

Gold Star in lieu of Third of Merit: “For…. outstanding services… prior to and during the Amphibious Invasion of Southern France in August 1944… Captain Cater expertly directed numerous gunfire support missions and the execution of several daring and damaging raids against shipping and harbor facilities while engaged  in action against hostile coastal positions, thereby assisting the Allied ground forces in their advance along the coastal areas.  By his effective coordination of the offensive efforts of his units in carrying out escort assignments, patrol operations and bombardment missions, he contributed to their success against the enemy in supporting Allied operations in Southern France….”

Letter of Commendation: “….During the period that a Task Unit operated in search of a reported enemy submarine you cooperated with and coordinated the actions of a similar search group engaged in the same operation. When contact was made with the U-boat, you directed available, surface units to the sense, and, by an accurate estimate of situation, instituted an effective search which resulted in relocating the submarine after the original contact had been lost. Upon the submarine’s being discovered it was subjected to a series of deadly attacks as a result of which it was completely destroyed…”

In January 1945 he became Assistant Director of the Officer Performance Division, Bureau of Naval Personnel, Navy Department, Washington, D.C. and served in that capacity for a year, before being transferred to the Bureau of Ships, Navy Department, for brief duty during January and February 1946. He next attended the advanced course in business administration at Harvard University, Cambridge, Massachusetts, completing his instruction in June 1946.

He was assigned to the San Francisco Naval Shipyard, where he served for six months as Planning Officer and later, for twenty-five months as Production Officer. He again Rear Admiral Cater contributed to the design of submarines. He supervised the installation and tests of one of the first Snorkles and conversion of a submarine to a troop carrying type. In February 1949 he reported as Industrial Manager, Eighth Naval District, with headquarters in New Orleans, Louisiana. He was mentioned by the Commandant of the Eighth Naval District as being instrumental in improving upon the work of the Board of Inspection and Survey and effecting noticeable measures to bring about economic and conservation of material throughout the Eighth Naval District. During this period he was also instrumental in the completion of the twenty nine Naval Reserve Training Centers throughout the District so that they could be used in the training of reserve officers.

He remained in the Eighth Naval District until October 1949, reporting the next month as Assistant Chief of the Bureau of Ships for Administration, Navy Department. He was serving as such when he was placed upon the Retried List of the US Navy on 1 November 1952. At that time he received the following letters from the Secretary of the Navy and the Chief of the Bureau of Ships:

From the Secretary: “… During your career you have witnessed many advancements in the morale, strength, and efficiency of the Navy. You have contributed materially to the accomplishments of these results by your outstanding professional and administrative ability. Your record reflects your excellent contribution in the field of Naval shipyard production and industrial management and indicated the technical proficiency, thoroughness, and forces you have shown in the many important assignments in which you have so successfully served…”

From the Chief of the Bureau of Ships: “Upon the occasion of your retirement after more than thirty years of continuous active service in the Navy I desire to express to you the appreciation of all those associated with the Bureau of Ships for your noteworthy contributions to the Navy during these many years of service.

“After a career at sea culminating in responsible and distinguished service afloat in World War II, you brought to your Engineering Duty aggressiveness, intelligence, and consistently mature judgement. You may look back with real personal satisfaction on your considerable part in the solution of many problems that have confronted the Bureau and its field activities in the past several years.

“I am personally grateful for the cooperation and support you have given me in your capacity as Assistant Chief for Administration since I have occupied the office of Chief, Bureau of Ships. Your capabilities and understanding vision demonstrated in these duties have improved the Bureau’s ability to meet its responsibilities to the forces afloat.

“Your intense interest in the management of affairs of the Bureau has constantly led to Bureau improvement from the day you assumed leaderships of the Administration Divisions. It was ever apparent that the Bureau represented to you an entity that must always be above criticism and you always vigorously endorsed any management improvement designed to further this end. As a result of your encouragement of management personnel, coupled with your willingness to help in every way, the several accomplishment enumerated below all bear evidence of your unselfish devotion to duty:

“The knowledge that you have earned and enjoy the respect of all your co-workers in the Navy should ever be a source of deep satisfaction to you. You merit the Navy’s well done and a host of friends within the Bureau and throughout the Naval Service wish for you many years of health, happiness, and continued good works.”

In addition to the Legion of Merit with Gold Stars and Combat “V,” the Bronze Star Medal with Combat “V” and the Commendation Ribbon also with “V,” Rear Admiral Cater has the World War I Victory Medal; the American Defense Service Medal with Bronze “A”; the American Campaign Medal; the European-African-Middle- Eastern Campaign Medal; and the World War II Victory Medal. He has also been awarded the Croix de Guerre from the Government of France.