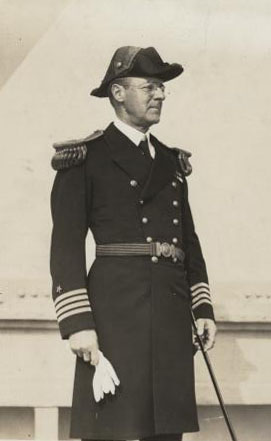 Rear Admiral Lackey was born in Norfolk, Virginia, 23 June 1876 and was appointed to the Naval Academy by the President of the United States in 1895. During the Spanish American War, he served in the USS New York and participated in the Battle of Santiago. In 1899, he joined the USS Massachusetts and during 1900 served in the USS Eagle and the USS Bancroft. In 1901, he was transferred to the USS Topeka and in 1903 to the USS Wheeling, in Samoa. He served in the Galveston which was placed in commission in February 1905, and in June sailed for the Asiatic Station via Europe. In 1906 he was in the Wilmington, also in the Asiatic Station, and in 1908 was ordered to duty at the Naval Proving Ground, Indian Head, Maryland. He was senior engineer officer of the USS New York from March to August 1910 when he was appointed fleet engineer on the staff of the commander-in-chief, Asiatic Fleet. He was on duty at the Norfolk Navy Yard from 1911 to 1915 when he was assigned as navigator of the USS Georgia, and in 1916 was executive officer of the USS Kansas. For four years he was Inspector of Ordnance in charge of the Naval Proving Ground, Indian Head, Maryland, and was awarded the Navy Cross 'for exceptionally meritorious' service during the World War 'in handling and testing the great amount of ordnance material with which that station was called upon to deal, so rapidly as to maintain a constant flow of absolutely necessary material to the service.'

In April 1920, he assumed command of the USS San Francisco, and in October 1920 was given additional duty as Commander Mine Force, Atlantic Fleet. He was Director of Ships Movements, Office of Naval Operations, from 1921 until 1924 and had additional duty as the Navy's representative at the Interstate Petroleum Meeting in 1921 and 1922.

He was in command of the light cruiser Memphis when she was placed in commission in 1924 and during her service as flagship of United States Naval Forces in Europe. As she returned from that duty, she brought Colonel Charles Lindbergh to the United States after his flight to Paris.

Rear Admiral Lackey was in command of the Naval Station, Norfolk, Virginia, from 1927 to 1930 when he assumed command of the USS California, flagship of the Battle Force.

On 16 January 1932, he was given charge of the Branch Hydrographic Office, San Francisco, and in May of that year was transferred to duty as Senior member of the Board of Inspection and Survey, San Francisco.

He was Commander, Cruiser Division Four, Scouting Force, from 1933 until 1935 when he was appointed Director of Shore Establishments. He served in that capacity until late in 1937, and assumed duty on 4 December 1937, as Commander, Squadron 40 (Temporary) operating in European waters. He returned to the United States in September 1939, and on 30 October 1939, reported for duty as President General Court Martial, Third Naval District.

Rear Admiral Lackey has been awarded the decoration of 'Commander of the Order of the Savior' by the government of Greece, and the Order of Naval Merit and Efficiency, 3rd Class, by the King of Spain. He has also received the Spanish Campaign Medal and Victory Medal.

Rear Admiral Lackey retired from the US Navy 1 July 1940 and died in Perterborough, New Hampshire on 15 October 1952.