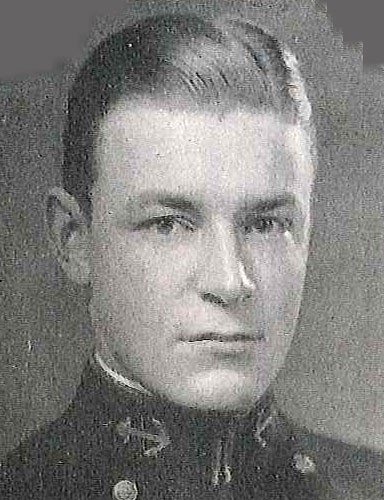 John Benjamin Fellows, Jr., was born Fitchburg, Massachusetts, on February 16, 1910, son of Mrs. Blanche D. (Nichols) Fellows late John Benjamin Fellows. He attended Fitchburg High School prior to entering the US Naval Academy, Annapolis, Maryland, in June 1927, as a Midshipman from Massachusetts. Graduated and commissioned Ensign on June 4, 1931, he subsequently advanced in rank, attaining that of Captain, to date from July 1, 1950.

After graduation from the Naval Academy in June 193, he was assigned first to USS Chester, and served as a junior officer (deck and engineering) aboard that cruiser until July 1934. He then joined USS Chicago, flagship of Commander Scouting Force, to serve for a year as Communication Watch Officer, after which he returned to the Chester. After seven months on board as Watch and Division Officer, he was transferred to USS Sandpiper, and as her Executive Officer participated in the Aleutian Islands Survey during the summer of 1936.

He remained at sea from September 1936 until June 1938 with successive duty as Engineer Officer of USS Talbot and as Communication and Torpedo Officer of USS Worden. Returning to Annapolis, he completed the General Line course and was detached in July 1939 with orders to USS Crowninshield. He served as Executive Officer from her commissioning, September 30, 1939 until September 1940, when she was turned over to Great Britain under Lease-Lend agreement. In October 1940 he was transferred to USS Gwin, in which he was Engineering Officer, Executive Officer, and finally Commanding Officer during the early period of World War II.

“For extraordinary heroism as Commanding Officer of USS Gwin during action against enemy Japanese naval forces off Savo Island, Solomon Islands, on the night of November 14-15, 1942…” he was awarded the Navy Cross. The citation further states: “Courageously fighting against numerically superior enemy forces of cruisers and destroyers, Lieutenant Commander Fellows fought his ship with such courage and determination that serve damage was inflicted upon the enemy. His calm devotion to duty in the heat of a furious battle was reflected in the superb performance of the Gwin, which, although repeatedly struck by enemy shells, maintained galling and effective fire on the Japanese ships, despite the partial disability of his ship… (he) rendered invaluable assistance to a friendly vessel in distress, after which he rescued the entire crew of the sinking vessel…”

He was also awarded a Silver Star Medal with citation, in part as follows:  “For conspicuous gallantry and intrepidity in action against the enemy while serving a the Commanding Officer of a destroyer engaged in the assault on Rendova Island and subsequent operations incident to the occupation of the New Georgia Islands including the second battle of Kula Gulf during the period from June 30 to July 1, 194… (He) directed well-sustained and accurate fire against enemy shore batteries and successfully covered a landing operation… rescued several survivors from one of our destroyers. In the second battle of Kula Gulf, his daring ship-handling contributed directly to the destruction of four and probably six enemy vessels…”

After instruction at the Fleet Sound School, Key West, Florida, and the Naval Training Station, Norfolk, Virginia, he reported on October 5, 1943 to the Navy Yard, Charleston, South Carolina, where USS Twings was building. He assumed command of that destroyer at her commissioning in November, and commanded her until March 1944. From April to August of that year he was a student at the Army-Navy Staff College, Washington, DC, and in September reported as a member of the India-China Mission, his duties concerning joint security. He was detached in January 1945 and during the remaining months of hostilities (until September 1945) served in Section G-3, Okinawa Headquarters, Tenth Army.

Upon his return to the United States, he reported to the Navy Department, Washington, DC, to serve from November 1945 to February 1946 in the Naval Mission Section of the Office of the Chief of Naval Operations. He was then named Executive Officer of the US Naval Mission to Colombia, South America, where he remained until May 1947. From June of that year until November 1950 he had duty as Director of Distribution, headquarters, Fifth Naval District, North, Virginia.

In January 1951 he assumed command of USS Neches, which from August 3 of that year until January 3, 1952, operated in the European Area assigned to occupation duty. He was detached from command of that Fleet oiler in June 1952, and in August reported to Headquarter, First Naval District, Boston, Massachusetts to serve as Director of Training. Since July 1953 he has been Assistant Chief of Staff for Personnel, First Naval District.