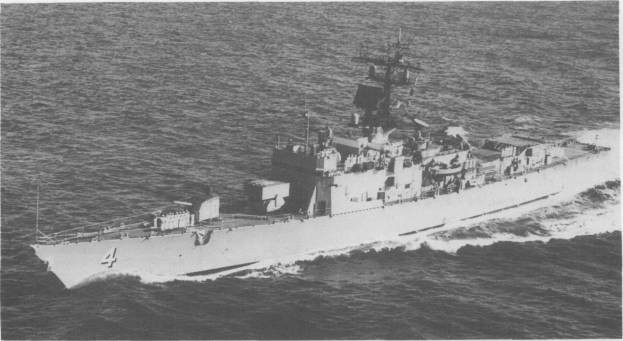 John Gunnell Talbot, born on 16 August 1844 at Danbury, Ky., was appointed a midshipman in 1862 and graduated from the United States Naval Academy on 12 June 1866. Commissioned ensign on 12 March 1868, Talbot attained the rank of master on 26 March 1869 and of lieutenant on 21 March 1870. He was serving as executive officer of Saginaw when that steamer grounded on a reef off Ocean Island in the mid-Pacific on 29 October 1870 and broke up. Lt. Talbot and four men volunteered to go to Honolulu, the nearest port, 1,500 miles away, for help.

The men began the voyage in an open boat on 18 November and reached Kauai, Hawaii, on 19 December. However, as the party attempted to get through the heavy surf to shore, their boat capsized. Lt. Talbot and three others drowned while attempting to swim through the rough breakers to shore. The lone survivor reported the wreck of Saginaw, and her crew was saved.

Silas Talbot, born on 11 January 1751 in Dighton, Mass., was commissioned a captain in the Continental Army on 1 July 1775. After participating in the siege of Boston and aiding in the transportation of troops to New York, he obtained command of a fireship and attempted to use it to set fire to the British warship Asia.

The attempt failed, but the daring it displayed won him a promotion to major on 10 October 1777.

After suffering a severe wound while fighting to defend Philadelphia, Talbot returned to active service in the summer of 1778 and fought in Rhode Island. As commander of Pigot and later of Argo, both under the Army, he cruised against Loyalist vessels that were harassing American trade between Long Island and Nantucket and made prisoners of many of them. Because of his success fighting afloat for the Army, Congress made him a captain in the Continental Navy on 17 September 1779. However, since Congress had no suitable warship to entrust to him, Talbot put to sea in command of the privateer General Washington. In it he took one prize, but soon thereafter ran into the British fleet off New York. After a chase, he struck his colors to Culloden, a 74-gun ship-of-the-line and remained a prisoner until exchanged for a British officer in December 1781.

After the war, Talbot settled in Fulton County, N.Y. He was a member of the New York Assembly in 1792 and 1793 and served in the federal House of Representatives from 1793 to 1795. On 5 June 1794, President Washington chose him third in a list of six captains of the newly established United States Navy. Before the end of his term in Congress, he was ordered to superintend the construction of the frigate President at New York. He commanded the Santo Domingo Station in 1799 and 1800 and was commended by the Secretary of the Navy for protecting American commerce and for laying the foundation of a permanent trade with that country.

The first Talbot (Torpedo Boat No. I5) was named for Lt. John Gunnell Talbot; the second and third Talbots (Destroyer No. 114 and DEG-4, respectively) were named for Capt. Silas Talbot.

On 8 July, the new guided-missile escort ship departed Hampton Roads, Va., for Puerto Rico for shakedown and missile system trials. Talbot next headed north and arrived at her home port, Newport, R.I., on 16 September. The ship conducted special operations off the Virginia Capes from 16 October to 18 November and then spent most of her time until the spring of 1968 undergoing post-shakedown availability. Following firing exercises at the Atlantic Fleet weapons range and antisubmarine operations late in April, the destroyer escort participated in the search for missing nuclear submarine Scorpion (SSN-589) in May. She devoted the rest of the year to operations along the Atlantic coast and in the Caribbean.

On 31 January 1969, Talbot departed Newport for the Mediterranean and was deployed with the 6th Fleet until she returned on 11 July. After overhaul at the Boston Naval Shipyard was completed on 1 April 1970, Talbot conducted local operations before returning to the missile range off Puerto Rico in May for weapons tests, followed by refresher training and four months at Newport. On 28 October 1970, she headed for the Mediterranean and her second tour with the 6th Fleet. The deployment ended at Newport on 2 May 1971, and she devoted the remainder of the year to east coast operations.

Talbot spent the first part of 1972 conducting tests of the MK-48 torpedo in the Bahamas and off the New England coast. She stood out of Newport on 21 July and proceeded to Roosevelt Roads, Puerto Rico, accompanied by Farragut (DLG-6) and Forrest Sherman (DD-931). There, Remora (SS-487) joined the group on the 26th, and they began combined operations with ships from seven South American navies while circumnavigating South America. Talbot made calls in Venezuela, Brazil, Uruguay, Argentina, Chile, Peru, the Canal Zone, and Colombia before returning to Newport on 3 December 1972. She entered the Boston Naval Shipyard on 15 February 1973 for an overhaul that lasted until 14 December.

On 5 January 1974, Talbot departed Newport and proceeded to her new home port, Norfolk, Va. Prom 13 February to 29 April, the ship was deployed on training exercises off Jacksonville, Fla.; Guantanamo Bay, Cuba; and Vieques, Puerto Rico. After a cruise to Newport in May, she entered the Norfolk Naval Shipyard on 17 June for the installation of prototypes of the Oto Melara Mk 75 rapid-fire 76mm gun mount and the Mk 92 fire-control system, intended for use in the new FFG-7 and PHM-1 classes. She stood out of Hampton Roads on 21 October and, from 12 November through 19 December 1974, tested the new systems at the Atlantic Fleet Weapons Range, Culebra, Puerto Rico.

Talbot continued her evaluation work into 1975, alternating three periods of test operations at Culebra with a tender availability alongside Puget Sound (AD-38) at Norfolk, local operations in the Virginia capes area, and fleet tactical exercises in the western Atlantic. Her test mission completed, Talbot returned to Norfolk on 22 June. After local operations and inspections, she entered the Norfolk Naval Shipyard on 15 September for a three-month overhaul in which her experimental fire-control system and 76mm gun were removed and replaced by her normal 5-inch, 38-caliber gun and fire-control system.

Upon completing overhaul and refresher training in the spring of 1976, Talbot departed Norfolk on 22 June for a Mediterranean deployment. The six-month operation included participation in NATO exercises interspersed with port visits and concluded with the ship's return to Norfolk on 10 January 1977. Following post-deployment leave and upkeep, Talbot conducted exercises off the east coast until she entered the Philadelphia Naval Shipyard for overhaul on 9 June. Completing overhaul on 7 April 1978, Talbot spent the balance of the year in refresher training and participating in Fleet exercises off the east coast and in the Caribbean. On 6 December, she departed the United States for deployment with the Middle East Force in response to the crisis surrounding the deposition of the Shah of Iran. The close of 1978 found Talbot en route to the Persian Gulf.