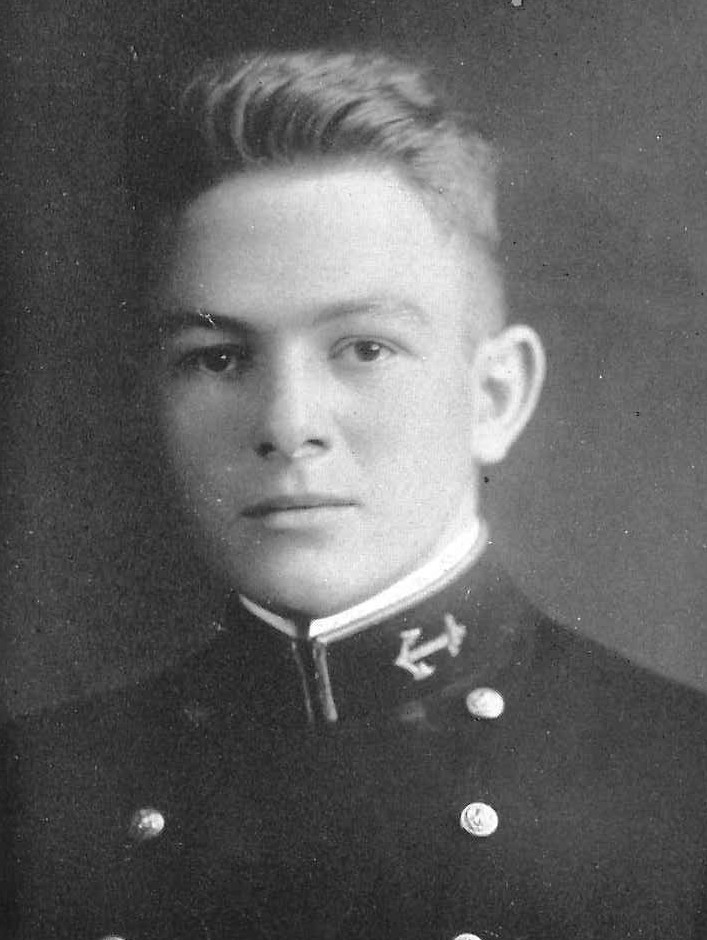 Eric Lloyd Barr, Jr., was born in New London, Connecticut, on May 2, 1912, son of Captain Eric L. Barr, USN, Ret. and Mrs. Ellen I. Culver Barr.  He attended San Diego Army and Navy Academy, Roosevelt High School in Seattle, and San Pedro High School, prior to entering the US Naval Academy, Annapolis, Maryland, on appointment from Connecticut on June 19, 1930.  As a Midshipman he participated in wrestling.  He was graduated and commissioned Ensign in the US Navy on May 31, 1934, and subsequently attained the rank of Commander, to date from September 7, 1944.  On March 1, 1947 he was transferred to the Retired List due to physical disability incurred in the service, and was advanced to the rank of Captain on the basis of combat citations.

After his graduation from the Naval Academy in 1934, he served for two years in the cruiser Detroit, and for a year thereafter remained at sea in the destroyer Cushing.  He had instruction in submarines in 1937, and the next year served on board the USS S-20, a submarine of Experimental Division ONE of the Submarine Force based at New London, Connecticut.  During the period 1939 through 1941 he continued submarine duty on board the USS Tarpon and USS Pickerel, submarine units of the Asiatic Fleet, and the USS O-3, based at New London.

At the outbreak of World War II in December 1941 he was ordered to the Navy Yard, Washington, DC, and after six months’ duty there reported to the Supervisor of Shipbuilding, USN, at the Electric Boat Company, Groton, Connecticut, to assist in fitting out the USS Haddo.  Before she was commissioned, however, he was transferred to the USS Kingfish, a new submarine, in which he served from August 1942 until June 1943 as Executive Officer.  He was awarded the Silver Star Medal “For conspicuous gallantry and intrepidity” in that capacity.  The citation states in part:

“…On three highly successful war patrols in dangerous, enemy-controlled waters, Lieutenant Commander Barr performed his essential duties with expert professional skill and splendid initiative.  By his cool and efficient direction of the activities of his officers and men during numerous torpedo attacks and subsequent gun engagements and enemy depth charges, he greatly contributed to the sinking or damaging of many hostile vessels…”

He returned to the Electric Boat Company to fit out the USS Bluegill, and from her commissioning in November 1943, throughout the period of hostilities, commanded that submarine.  For heroic service in that command, he was awarded the Navy Cross with Gold Star in lieu of the second Navy Cross, a Gold Star in lieu of the Second Silver Star Medal, the Bronze Star Medal with Combat “V,” and a Letter of Commendation, with Ribbon and Combat “V,” from the Commander in Chief, US Pacific Fleet. The citations follow, in part:

Navy Cross: “For extraordinary heroism as Commanding Officer of the USS Bluegill, on War Patrol in enemy-controlled waters in the Pacific Ocean War Area, from April 1, to June 1, 1944.  Alert and aggressive throughout-this arduous period, Commander Barr boldly launched relentless attacks against an enemy cruiser and two enemy merchant ships, and, skillfully maneuvering for maximum fire power during these fierce engagements, sank the Japanese ships with torpedo and gunfire.  Adroitly evading hostile counterattacks from enemy anti-submarine vessels, he succeeded in bringing his ship through these actions without damage, thereby contributing materially to the continuance of our offensive operations against the enemy…”

Gold Star in lieu of Second Navy Cross: “For extraordinary heroism…during the Third War Patrol of (the Bluegill) in the enemy infested waters of the Sulu Sea and off the coast of Manila, from September 18 to November 25, 1944.  In the face of extreme hostile countermeasures, (he) succeeded in annihilating a Japanese convoy.  On one occasion after two attacks had failed because of enemy evasive maneuvers and a severe depth-charging in which flames from the exploding charges entered the Bluegill’s torpedo loading hatch, he attacked and sank a coastal steamer and inflicted extensive damage on two heavily loaded sea trucks…”

Gold Star in lieu of Second Silver Star Medal: “For conspicuous gallantry and intrepidity as Commanding Officer of the USS Bluegill during her Second War Patrol against enemy Japanese forces in the vicinity of Davao and Moro Gulf, PI, from July 6 to August 24, 1944.  Skillfully evading persistent enemy anti-submarine patrols of surface craft and airplanes near Japanese bases, (he) directed his vessel in close-to-shore daylight attacks, sinking two heavily escorted freighters and an escorting Chidori Type torpedo boat while avoiding damage to his own ship…”

Bronze Star Medal: “For heroic achievement…during the Fifth War Patrol of (the USS Bluegill) in enemy Japanese-controlled waters, from March 12 to April 18, 1945…Commander Barr launched a daring attack against an enemy tanker, a destroyer and four escorts intercepted close to a hostile island on March 28.  Although severely depth-charged before and during the course of the attack, he persevered in his mission and succeeded in scoring hits with four out of five torpedoes to sink the 5700-ton tanker and inflict severe damage on the 1500-ton destroyer…”

Letter of Commendation: “For meritorious conduct in the performance of his duties as Commanding Officer of the USS Bluegill during the Sixth War Patrol of that vessel in enemy-controlled waters south of Swatow, China, and southwest of Formosa during the period 11 May to 21 June 1945…”

Detached from the Bluegill in October 1945, Captain Barr reported to the National Naval Medical Center, Bethesda, Maryland, and was a patient at the Naval Hospital there until his retirement, effective March 1, 1947.