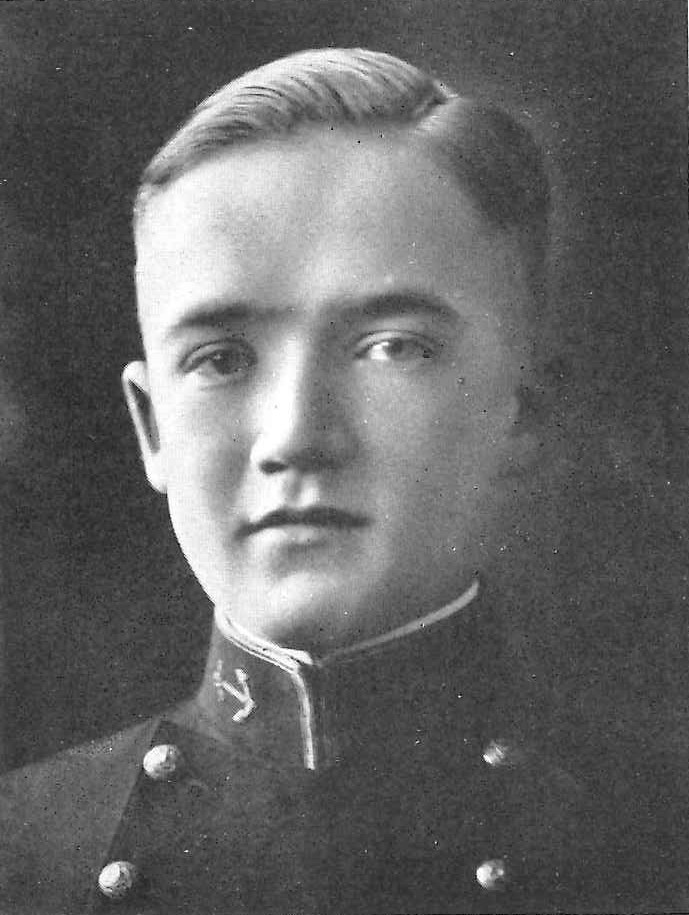 Captain Bartlett was born on December 26, 1900, at Annapolis, Maryland, son of the late Commodore Frank W. Bartlett, USN, and Mrs. Hattie Owen Bartlett.  His father, then a Lieutenant, Class of 1878, was on duty at that time at the US Naval Academy.  Entering the Naval Academy on appointment from Michigan in 1918, Captain Bartlett was a member of the Naval Academy Rifle Team during the four years he was a Midshipman.  Graduated and commissioned Ensign on June 2, 1922, he subsequently attained his present rank to date from June 21, 1942.

Following graduation from the Naval Academy in June 1922, Captain Bartlett was assigned to the USS North Dakota, a unit of Battleship Division 1, Scouting Fleet, and served as her Assistant Navigator until transferred in 1923 to the USS Colorado.  He had various assignments while that battleship operated with Division 5, Battleship Divisions, Battle Fleet.  Returning to Annapolis in 1929, he completed the General Line Course at the Postgraduate School, and remained as an instructor in the Department of Ordnance and Gunnery at the Naval Academy during 1930-31.

Captain Bartlett had sea duty from 1931 to 1934 as Executive Officer of the USS Cole, operating in the Atlantic as a unit of Destroyers, Scouting Force, and again returned to the Naval Academy for a second tour of duty as instructor in Ordnance and Gunnery until 1937.  A distringuished pistol shot, he participated in the National Rifle and Pistol Matches at Camp Perry, Ohio, during the years 1921, 1923, 1927, 1930, 1935, and 1936.

Duty as Fire Control Officer of the USS Quincy from June 7, 1937 until April 16, 1938, preceded that of Gunnery Officer on the staff of Commander, Asiatic Fleet, aboard the flagship, USS Marblehead, until April 1939.  He assumed command of the USS Tutuila, operating on Yangtze Patrol, under Commander, Asiatic Fleet, on April 27, 1939, and remained in that command until relieved on April 30, 1940, to return to the United States.

He reported on June 21, 1940, to the Navy Yard, Washington, DC, for a three year tour of duty at the Naval Gun Factory, after which he proceeded to the Pacific, and on October 29, 1943, assumed command of the USS Neville.  For outstanding services as Commanding Officer of that transport-attack vessel, Captain Bartlett was awarded the Bronze Star Medal with Combat “V,” and cited as follows:

“For meritorious service as Commanding Officer of the USS NEVILLE during operations against enemy Japanese forces at Makin, Kwajalein, Eniwetok and Saipan from October 1943, to February 1945.  Despite frequent hostile air attacks and the constant menace of enemy mines and submarines, Captain Bartlett gallantly maneuvered his ship in forward areas over prolonged periods and effected the efficient landing of troops and supplies onto the assault beaches.  By his able leadership and devotion to duty, he contributed materially to the successful completion of these amphibious operations, and his conduct throughout upheld the highest traditions of the United States Naval Service.”

From February until September 1945, Captain Bartlett had command of Transport Division 1, organized to train troops in amphibious operations, and after the cessation of hostilities he had duty on the staff of Commander, Service Force, Pacific Fleet, engaged in transporting to the United States priority veterans of the Pacific War Areas.

Captain Bartlett then proceeded to Pearl Harbor and on November 29, 1945, reported for duty as Officer in Charge of the Officer Personnel Division, Service Force, Pacific, with additional duty on the staff of the Commandant of the Fourteenth Naval District, Pearl Harbor, T.H.  He served in that dual capacity until ordered on February 15, 1946, to duty as Officer in Charge, Civilian Housing, Naval Base, Pearl Harbor.  He is now under orders of May 3, 1948, to duty as Commanding Officer, Naval Ordnance Plant, Alexandria, Virginia.