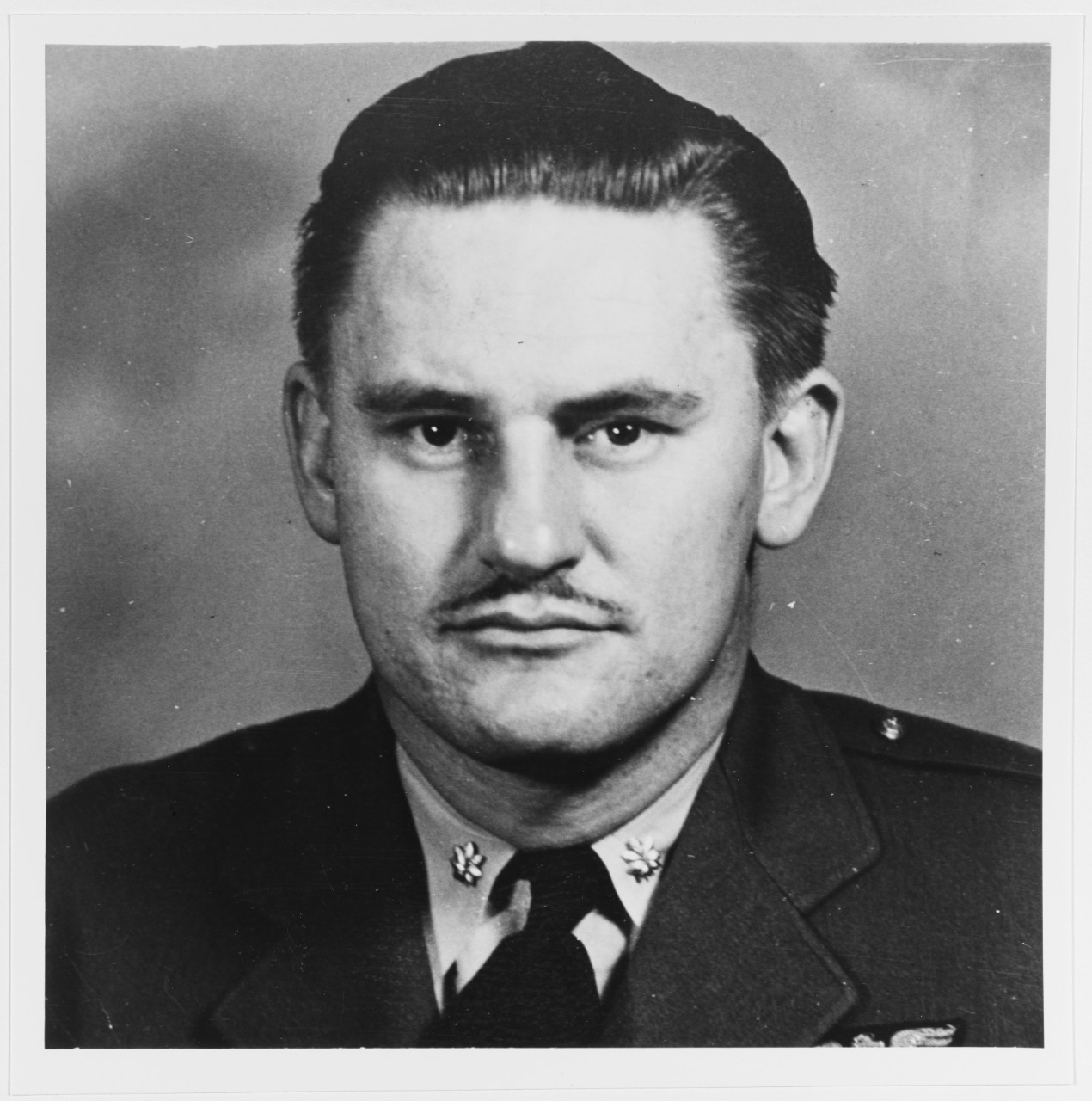 Carl Henry Amme, Jr., was born in Charleston, South Carolina, on 14 October 1913, son of Carl Henry and Josie (Bargmann) Amme. He attended Charleston High School and LenoirRhyne College, Hickory, North Carolina, for two years prior to his appointment to the US Naval Academy, Annapolis, Maryland, from his native state in 1932. As a Midshipmann he was Director of the orchestra and participated in water polo, swimming, and Musical Club shows. Graduated and commissioned Ensign on 4 June 1936, he subsequently advanced in rank , attaining that of Captain, to date from 1 October 1954.

Following graduation from the Naval Academy in 1936, he joined USS Pennsylvania, and in May 1938 joined USS Dickerson. Detached from that destroyer in January 1939, he reported in April of that year aboard the USS Boise. Between March and May 1940, he had instruction at the Naval Unit, Edgewood Arsenal, Edgewood, Maryland, after which he was assigned to USS Tuscaloosa.

Returning to the United States in July 1941, he had flight training at the Naval Air Station, Pensacolo., Florida, and on 27 December 1941 was designated Naval Aviator. In February 1942 he joined Patrol Squadron FORTY THREE, and for outstanding services in that assignment was awarded the Air Medal, a Gold Star in lieu of the Third Air Medal and the Distinguished Flyiny Cross. The citations follow in part:

Air Medal: "For meritorious achievement...as Second Pilot of a Patrol Plane...during the Aleutian Islands Campaign on June 10 to June 20, 1942. Braving severe Alaskan weather and with low ceiling forcing his plane to fly through clouds to carry out its attack mission against Japanese ships in Kiska Harbor, Lieutenant Amme skillfully assisted in determined dive-bombing and strafing attacks. Pulling out in the clear at a very low altitude, his plane was subjected to withering anti-aircraft fire from enemy ship and shore batteries and pierced by shrapnel and lighter caliber projectiles..."

Gold Star in lieu of the Third Air Medal: "For meritorious achievement as Patrol Plane Commander of a Plane in Patrol Squadron FORTY-THREE...in the North Pac ific Area from July 5 to August 7, 1942...(he) contributed materially to the success of his squadron in the infliction of extensive damage on enemy shipping..."

Distinguished Flying Cross: "For extraordinary achievement...in action against an enemy submarine in Nazon Bay, 31 August 1942. After assisting in a vigorous attack on the submarine, Lieutenant Amme promptly trailed the vessel and marked its slick. His courageous initiative and alert action greatly aided in the subsequent sinking of the enemy submarine by USS Reid..."

He is also entitled to the Ribbon for and a facsimile of the Navy Unit Commendation awarded Patrol Squadron FORTY THREE, for combat action during the period June 8 to August 1, 1942.

In May 1943 he assumed command of Patrol Squadron FORTY FIVE, and for "meritorious achievement...(in that command) during operations against enemy Japanese forces in the vicinity of the Aleutians from May to October 1943..." he was awarded a Gold Star in lieu of the Second Air Medal. The citation continues in part:

"Completing numerous reconnaissance flights between Attu and Paramushiro during this period, (he) contributed materially to the success of his squadron..."

Relieved of command of Patrol Squadron FORTY FIVE in November 1943 he had duty with Fleet Air Wing FOURTEEN, and in August 1944 transferred to the staff of Commander Fleet Air, West Coast. He continued to serve in that assignent until March 1945, when he reported as Commanding Officer of Patrol Bombing Squadron ONE HUNDRED NINETY SEVEN. In September 1945 he became Executive Officer of USS Corregidor, and on 15 April 1946, assumed command of that escort aircraft carrier.

He was attached to the staff of the Commander Naval Forces, Eastern Atlantic and Mediterranean, March 1952-July 1954 and after instruction at the NATO Defense College, Paris, France remained there as an Instructor until July 1956. He was next in command of the Naval Air Station, Niagara Falls, New York and in May 1958 was ordered to duty as Commanding Officer of the oiler Navasota. He had instruction at the National War College, Washington, DC, from August 1959 to May 1960, after which he reported for duty in the Bureau of Naval Weapons, Navy Department.  He served there as Assistant Director of the Missile Division until released from active duty for retirement on 1 July 1962.