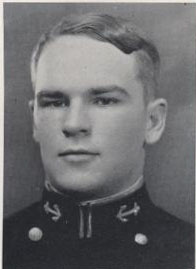 Alan Boyd Banister was born in Grant Indian Territory (Oklahoma), on 4 February 1905, son of Robert S. and Eugenia (Boyd) Banister. He attended Hugo (Oklahoma) High School, prior to entering the US Naval Academy, Annapolis, Maryland, on appointment from the state of Oklahoma in 1924. As a Midshipman he won his letter in wrestling and participated in class track. Graduated and commissioned Ensign on 7 June 1928, he subsequently progressed in rank to that of Captain, to date from 25 March 1945. On 1 July 1958, he was transferred to the Retired List of the US Navy and was advanced to the rank of Rear Admiral on the basis of combat awards.

Following graduation from the Naval Academy in 1928, he remained there for the summer course in aviation and in September joined the USS New Mexico. During her cruise to the East Coast, he was detached from that battleship, April 1930, after which he attended the Chemical Warfare School, Edgewood, Maryland, for three months. In July, he reported for submarine training at the Submarine Base, New London, Connecticut. Designated a Submariner, he was assigned in January 1931 to the USS S-13, based at the Submarine Base, Coco Solo, Canal Zone and in December 1934 transferred to the USS S-17, just prior to her departure for Philadelphia, Pennsylvania, for decommissioning. Upon the arrival of the S-17 at Philadelphia, he was ordered in January 1935 to duty in the Engineering Section of the Fleet Training Division, Office of the Chief of Naval Operations, Navy Department, Washington, DC, where he remained until May 1935.

He attended the course in general line at Postgraduate School, Annapolis, Maryland and upon completing his instruction in June 1936, was assigned to the Office of Naval Intelligence, Navy Department. In May 1937 he joined the USS S-20 and when detached from that submarine assumed command in April 1938 of the USS R-2. He was an Instructor at the Submarine School, New London, Connecticut, where he served, following the United States' entry into World War II, 8 December 1941, until June 1943. He received a Letter of Commendation, with authorization to wear the Commendation Ribbon, from the Commander in Chief, US Atlantic Fleet. The citation follows in part:

He had duty as Prospective Commanding Officer of the USS Searaven and the USS Sawfish, between July and December 1943, at which time he assumed command of the latter. For outstanding services as Commanding Officer of the USS Sawfish, he was awarded the Navy Cross, a Gold Star in lieu of the Second Navy Cross and also received a Letter of Commendation, with authorization to wear the Bronze Star on his Commendation Ribbon and Combat "V," from the Commander in Chief, US Pacific Fleet. The citations follow in part:

Navy Cross: "For extraordinary heroism as Commanding Officer of the USS Sawfish, during the Seventh War Patrol of that vessel in enemy Japanese-controlled waters from June 22, to August 15, 1944. Penetrating the air screens of a 9,500 ton enemy tanker, (he) delivered a series of bold torpedo attacks to inflict severe damage on the hostile craft before the Sawfish was forced to deep submergence by aerial bombing, making further attack impossible. On another occasion, (he) contacted an enemy submarine of 1,900 tons and delivered a spread of four torpedoes, three of them direct hits, to sink the hostile vessel. Employing evasive tactics in the face of severe enemy counter-attacks, he succeeded in bringing his ship to port..."

Gold Star in lieu of the Second Navy Cross: "For extraordinary heroism...during the Eighth War Patrol of the Sawfish...in enemy Japanese-controlled waters of the Pacific, from September 9 to November 8, 1944, as Commander of a Coordinated Attack Group of Submarines during the same period. Despite the enemy's intense anti-submarine measures, Commander Banister skillfully maneuvered his ship into a favorable position to strike hostile shipping and, launching three well-planned and brilliantly executed torpedo attacks, succeeded in sinking two hostile ships totalling over 17,000 tons and in damaging an enemy tanker of over 10,000 tons. In addition, he effected the rescue of a downed Naval Aviator who had been adrift at sea for four and one-half days. By his excellent judgment, efficient coordination and supervision as Group Commander, (he) enabled the submarines under his command to sink eight enemy ships totaling over 56,000 tons and damage three hostile ships totaling over 19,000 tons..."

Letter of Commendation: "For distinguishing himself by meritorious conduct in action...as commanding Officer of a United States submarine during a war patrol of that vessel. His aggressive attacks resulted in sinking an enemy ship of more than 5,000 tons..."

He was a student at the National War College, Washington, DC, from August 1949 to June 1950, when he was assigned to the Weapons Systems Evaluation Group, Office of the Secretary of Defense, Washington, DC. In July 1952 he reported as Chief of Staff and Aide to Commander Submarine Force, US Atlantic Fleet and in July 1954 became Commander Submarine Flotilla ONE, his flag in the USS Volador (SS-490). On 7 December 1955 he reported as Director of the Naval Reserve Plans Division, Office of the Chief of Naval Operations, Navy Department and from July 1956 to June 1957 was Acting Assistant Chief of Naval Operations (Naval Reserve). He served as Chief of Staff and Aide to the Commander of the Naval Base, Portsmouth, New Hampshire, until relieved of active duty pending his retirement, effective 1 July 1958. He died in Boston, Massachusetts, on 1 November 1963.

He was survived by his wife, the former Cynthia Prudden Harts, and they had four children.

In addition to the Navy Cross with Gold Star and the Commendation Ribbon with Bronze Star and Combat "V," Rear Admiral Banister had the American Defense Service Medal; American Campaign Medal; Asiatic-Pacific Campaign Medal with silver star (five engagements); World War II Victory Medal; and the Philippine Liberation Ribbon with one star. He also had the Navy Expert Pistol Shot Medal and the Submarine Combat Insignia with three stars. He was awarded the Peruvian Cross of Naval Merit, rank of Knight Commander.