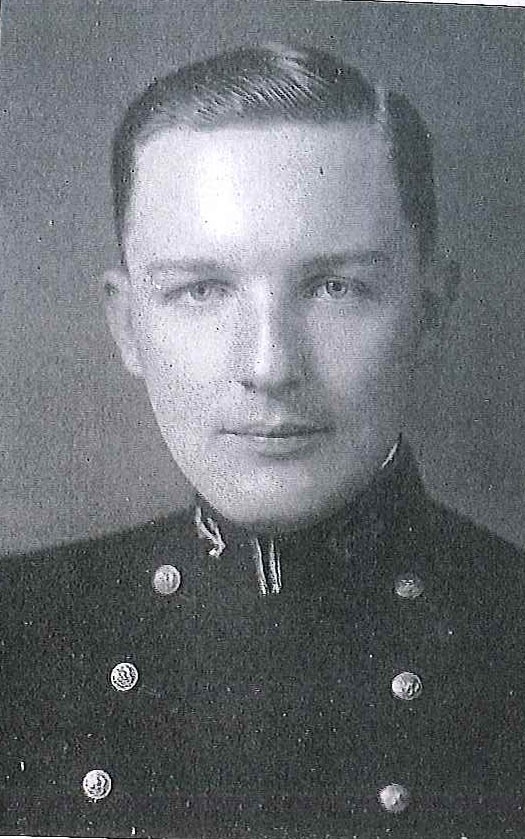 William Anthony Ellis was born in Brunswick, Maryland, on September 20, 1912, son of the late Captain Charles Vinton Ellis ChC, USN and Mrs. (Helen Elizabeth Pace) Ellis. Before entering the U.S. Naval Academy, Annapolis, Maryland, on June 9, 1932, he attended High Schools in San Pedro, California, Pensacola, Florida, and Highland Park, Illinois; Lake Forest College; and the Cochran-Bryan Preparatory School, Annapolis. As a Midshipman he participated in Company athletics and was Assistant Manager of the Soccer Team for three years; belonged to the Drum and Bugle Corps, being its commander one year; was a member of the Reception Committee three three [sic] years; was a member of the Masqueraders and Musical Clubs, and Advertising and Business Manager, 1935-36; and held the rank of Midshipman Lieutenant (junior grade) and Midshipman MPO. He was awarded a Letter of Commendation by the Superintendent, upon graduation. Graduated and commissioned Ensign on June 4, 1936, he subsequently attained the rank of Captain, to date from April 1, 1955.

Upon graduation from the Naval Academy in June 1936, he was assigned to USS Maryland, a unit of Battleship Division 4, Battle Force, and during his period of duty aboard was Editor of the ship's paper "Catapult." Detached in May 1938, he next served for ten months as Communication Watch Officer on the staff of Commander in Chief, US Fleet, attached to USS Pennsylvania, flagship. Returning to the Maryland in March 1939, he had an additional years' duty aboard, after which he was assigned from April to August 1940 to the Naval Air Station, Pensacola, Florida, as Student Naval Aviator.

Further sea duty in the USS Semmes, an auxiliary vessel, formerly a destroyer, preceded service as Executive Officer of USS Nelson (DD 623), from October 1942 to August 1943, during which period of World War II he participated in the Sicilian occupation in July and August 1943. He returned to the United States in September 1943, and served during the remainder of the war in the Office of the Chief of Naval Operations, Navy Department, Washington, DC, as Technical and Administrative Assistant, Communication Security Station, Naval Communications Division. He received a Letter of Commendation, with authorization to wear the Commendation Ribbon, from the Secretary of the Navy, for "exceptionally meritorious conduct…during the period September 30, 1943 to August 14, 1945…" while serving in the Communication Security Section. The citation continues in part:

"…By the exercise of great foresight and administrative ability, he instituted and carried out plans and policies which enabled the Communications Security Organization to meet efficiently the obligations enforced on it and to overcome the difficulties arising from rapid expansion and changing command relationships…In addition, as a member of the Security Advisory Board for the Office of War Information, his advice and counsel were of great assistance in serving the security of governmental communications thereby aiding materially in the successful prosecution of the war…"

In May 1946 he joined USS Strong (DD-758), and served for eight months as Commanding Officer of that destroyer. He was transferred to command of USS Roman (DMS 21) in January 1947, and in March of that year, assumed command of the USS Hanson (DDR 832) in the Atlantic. The latter vessel, under his command, later participated in the European Occupation from February to May 1948 and represented the United States at Rhodes during the March 7, 1948 ceremonies celebrating the Re-annexation of the Dodecanese Islands. In August 1948 he was detached to return to Washington, DC, for a tour of shore duty, having been designated a Special Duty Office (SDO)-Communications.

During the next fifteen months he was assigned to the National Security Agency, first as Assistant Chief, later as Deputy Chief, Office General Studies, Production. In April 1960 he returned to the Office of the Chief of Naval Operations and served one month with the Joint Study Group, Joint Chiefs of Staff, and thereafter until July 1961 as Officer in Charge, Naval Security Group Headquarters Activity, and Assistant Head, Naval Security Group. Under orders of July 3, 1961, he is now assigned to the Joint Staff Office, Joint Chiefs of Staff, Washington, DC.