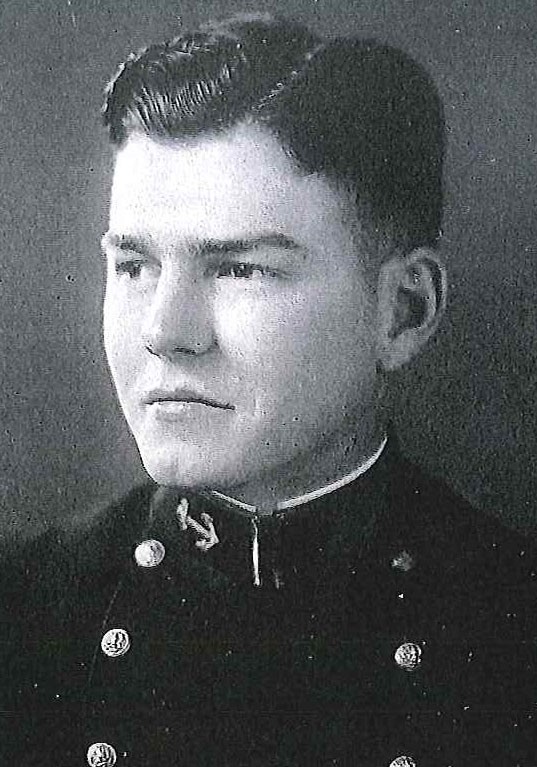 John Harllee Carmichael was born in Waycross, Georgia, on September 7, 1914, son of John H. and Kate (Wilson) Carmichael. He attended Western High School in Washington, DC, prior to his appointment to the US Naval Academy, Annapolis, Maryland, in 1932. As a Midshipman he was a member of the Fencing Team for four years, being Captain his First Class year. He was graduated and commissioned Ensign on June 4, 1936, and through subsequent promotions attained the rank of Captain to date from July 1, 1955.

Upon graduation from the Naval Academy in June 1936, he was assigned to USS Mississippi, and remained on board that battleship, a unit of Battleship Division 3, Battle Force, until April 1938. He next assisted in fitting out USS Nashville at the New York Shipbuilding Corporation, Camden, New Jersey, and served in that cruiser from her commissioning, June 6, 1938 until February 1942, during which period she made a shakedown cruise to France, England, and Sweden, and a “Goodwill” cruise to Rio de Janerio, Brazil, practiced Fleet Maneuvers in the Caribbean, completed exercises in the Hawaiian Area, and made neutrality patrols in the North Atlantic.

In April 1942 he returned to the New York Shipbuilding Corporation this time to assist in fitting out USS Cleveland. He joined that cruiser when she was put into commission, June 15, 1942, and subsequently participated in the North African Invasion. Later in the South Pacific, as Gunnery Officer, he took part in operations at Rennell Island, Southern Solomons, New Georgia, Kolombangara, Buka Bonis, and Shortland Area; in the capture and occupation of Saipan, Guam, Tinian, and Southern Palau Islands, and in the Battle of the Philippine Sea.

He was awarded the Bronze Star Medal with Combat “V”, and a Letter of Commendation, with Ribbon and Combat “V”, from the Commander in Chief, Pacific Fleet. The citations follow in part:

Bronze Star Medal: “For meritorious achievement as Gunnery Officer of USS Cleveland, during action against enemy Japanese forces in the Northern Solomon Islands Area from October 30 to November 2, 1943 . . . (He) contributed directly to the Cleveland’s success in the initial bombardment of the Buka-Bonis Area, the first daylight assault of the Shortland Area; the night engagement with a Japanese surface force of superior fire power in which the enemy sustained a decisive defeat and a subsequent air attack by sixty-seven hostile dive-bombing planes, of which seventeen were destroyed  by our task force . . . (and) contributed to the protection of our beachhead at Empress Augusta Bay and to the successful establishment of our land and air forces on Bougainville Island . . .”

Letter of Commendation: “For meritorious conduct in the performance of his duties as Gunnery Officer of USS Cleveland during action against enemy Japanese shore batteries at the time of the initial invasion of Tinian Island, in the Marianas, on July 24, 1944 . . .”

He is also entitled to the Ribbon for and a facsimile of the Navy Unit Commendation awarded Cruiser Division Twelve, of which the Cleveland was a part.

From November 1944 throughout the remaining war period, and until February 1946, he served as Gunnery and Assistant Operations Officer on the staff of Commander Fifth Fleet, during periods of extended amphibious operations. He was awarded the Legion of Merit with Combat “V”, for “exceptionally meritorious conduct. . .” in that capacity from November 1944 to November 1945. The citation states in part:

“Assisting in the preparation of the complex plans for these operations, Commander Carmichael advised the Commander Fifth Fleet in matters pertaining to the employment of all offensive and defensive ordnance during the campaigns and in addition supervised the maintenance of navigational information and operation plots and records essential to the effective conduct of Fleet operations. . .”

In March 1946 he was assigned to the Bureau of Ordnance, Washington, DC, where he served as Head of the Armor and Ballistic Sections, in the Research and Development Division, until August 1949. Ordered to sea, he had ten months’ duty as Executive Officer of USS Chilton (APA-38) and in August 1950 assumed command of the USS Basilone (DDE-824). He joined the staff of the Commander in Chief, Atlantic Fleet in December 1951 and in August 1954 was detached for instruction at the National War College, Washington, DC.

From June 1955 until November 1956 he was Commander Destroyer Division Two Hundred Forty Two, after which he had duty as Commanding Officer and Director of the Atlantic Fleet Antisubmarine Warfare Tactical School, Norfolk, Virginia. In September 1959 he assumed command of USS Shenandoah (AD-26) and in June 1960 was detached to command Destroyer Squadron Thirty-two. Assigned in September 1961 to the Office of the Chief of Naval Operations, Navy Department, he served as Assistant Director of the Fleet Operations Division until ordered detached in January 1964 for duty as Commanding Officer of the Naval Station, Key West, Florida.