The capital of Tennessee.

In addition, Nashville, an unfinished Confederate ironclad ram built at Montgomery, Ala., surrendered to Union forces at Nanna Hubba, Ala., on 10 May 1865. The Navy subsequently purchased her from a prize court, but did not utilize Nashville in active service and sold the ship at public auction at New Orleans, La., on 22 November 1867. 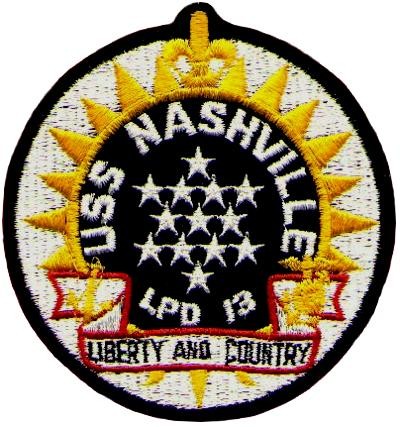 The ship’s coat of arms is centered about the thirteen stars that represent the thirteen original colonies. The stars also allude to Nashville as the thirteenth ship of her class of amphibious transport docks. The gold compass rose from the seal of the City of Nashville surrounds the blue field and white stars, symbolizing the link between the ship and city for which she was named. The traditional emblems of the Navy and the Marine Corps flank the compass. Emblazoned on the banner is the motto taken from the dying words of Brig. Gen. Francis Nash, Continental Army, following the Battle of Germantown, Pa., on 7 October 1777: “From the first dawn of the Revolution, I have ever been on the side of liberty and my country.”

Nashville took part in the International Review of Ships, during the Bicentennial Celebration of the Adoption of the Declaration of Independence, at New York City (28 June–12 July 1976). At one point during the afternoon watch on 4 July, President Gerald R. Ford Jr., briefly boarded Nashville and watched the “Tall ships” sail past the amphibious transport dock.

A civil war between Muslim extremists, Christians, and Jews raged in Lebanon while Nashville, with the leathernecks of Marine Amphibious Ready Group 2-82 embarked, deployed to the Sixth Fleet in the Mediterranean (24 May–25 November 1982). On 24 June, aircraft carrier Dwight D. Eisenhower (CVN-69), dock landing ship Hermitage (LSD-34), and Nashville began their participation in the extended evacuation of U.S. Embassy staff and civilians from Beirut. Orders directed Nashville to “Lay to Juniyeh [approximately 10 miles north of Beirut], Lebanon, for evacuation of civilians,” on 24 June. The following day, she anchored at Larnaca, Cyprus, and embarked 380 people evacuated from the war.

Nashville anchored at Beirut during the succeeding weeks intermittently, returning to refuel and provision at Naples, Italy. She supported a multinational peacekeeping force, including U.S. marines, which attempted to maintain an uneasy truce between the warring factions. The ship provided a vital logistics role, conducting daily flight and boat operations, and sending food, laundry, fuel and other supplies ashore. She also hosted Lebanese and multi-national force officials.

A bomb killed Lebanon’s Christian President Bashir Gemayel on 14 September, and on 22 September, Gemayel’s Phalangist followers retaliated by massacring Muslim Palestinian refugees at camps at Sabra and Shatila. Nashville rendezvoused with other ships of the Sixth Fleet, returned to Lebanese waters, and on 30 September landed her marines to occupy Beirut International Airport as part of the peacekeeping force. Nashville embarked the marines and loaded their support equipment on 30 October, and set course for home on Halloween.

Nashville took part in International Naval Review ’86 (23 June–8 July 1986) during Liberty Weekend, the celebration of the restoration and centenary of the Statue of Liberty, in New York. Secretary of the Navy John F. Lehman Jr., briefly visited the ship during the festivities.

During the final years of the 20th century, internecine fighting continued between the rival factions in the Balkans. International diplomatic efforts failed to counter Serbian President Slobodan Milosevic’s atrocities against ethnic Albanians from Kosovo, which he disguised as “cleansing” as part of Operation Horseshoe. The NATO allies thus began Operation Allied Force: an air campaign to reduce Milosevic’s ability to sustain the attacks against these people, in 1999. Nashville participated in Allied Force in the Adriatic Sea at times during her deployment to the Sixth Fleet (November 1998–May 1999). 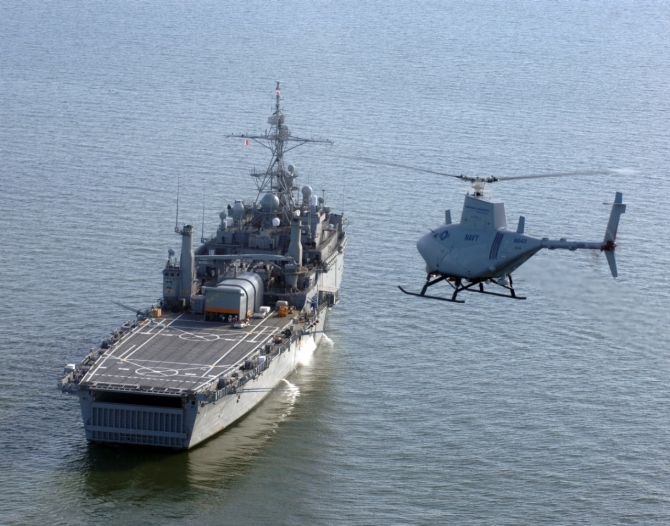 During this period, Hezbollah terrorists attacked Israeli settlements with rockets and the Israelis thus began Operation Change of Direction: to drive the terrorists from Israel’s northern borders. On 16 July 2006, amphibious assault ship Iwo Jima (LHD-7), Nashville, and dock landing ship Whidbey Island (LSD-41), with the 24th Marine Expeditionary Unit embarked, received orders to come about from the Red Sea and operate as part of Task Force (TF) 59 for what expanded into Operation Strengthen Hope: the evacuation of Americans from Lebanon. On 23 August, European Command directed Joint Task Force Lebanon to take over the mission performed by TF 59, and by USAF Lockheed MC-130P Combat Shadows and Sikorsky MH-53M Pave Lows, and USA Boeing Vertol CH-47 Chinooks. Vice Adm. John D. Stufflebeem broke his flag in command of the force from command ship Mount Whitney (LCC-20). Nashville evacuated people from the fighting, including Chef Anthony Bourdain and his crew from the show No Reservations. Fans dubbed the ensuing clip “The Shwarma and Shrapnel Episode” (Shwarma is a sandwich-like wrap of Middle Eastern origin). Amphibious assault ship Wasp (LHD-1), with Helicopter Mine Countermeasures Squadron 14 Detachment 1 embarked, began a surge deployment to the area from Norfolk, Va., on 25 August. Additional ships that took part included amphibious transport dock Trenton (LPD-14). The force evacuated nearly 15,000 Americans, and provided humanitarian assistance to victims of the fighting. 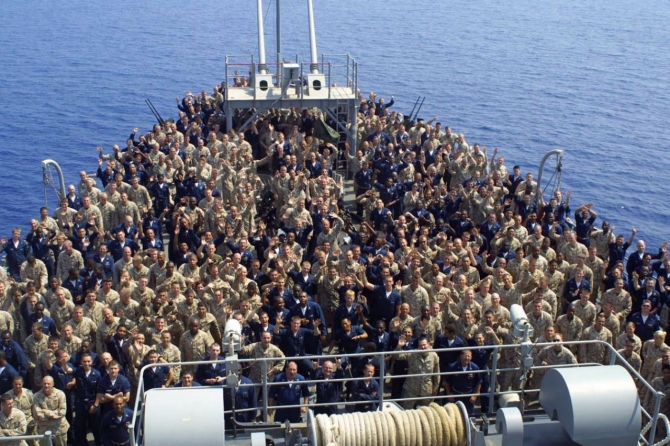 Sailors and Marines gather on the forecastle of Nashville for a group picture during her deployment to the Mediterranean, 16 August 2006. (Mass Communication Specialist 1st Class Shonn Moore, U.S. Navy Photograph 060816-N-0757M-003, Navy NewsStand)