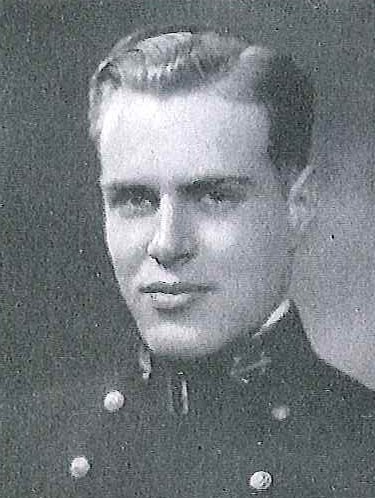 William Sears Estabrook, Jr., was born on May 10, 1908, in Fayetteville, New York, son of William S. Estabrook of Syracuse, New York, and the Late Mrs. Eleanor Weller Evans Estabrook. After graduation from Fayetteville High School, he entered the US Naval Academy, Annapolis, Maryland in June 1926. He was graduated and commissioned ensign on June 5,1930, and through subsequent promotions attained the rank of Captain, to date from March 4,1949, having served in that rank (temporary) from December 1945 to January 1948.

After graduation from the Naval Academy in June 1930, he served for almost two years as a junior officer in training aboard a battleship, USS West Virginia. From May 1932 until January 1933 he was Torpedo Officer and Communication Officer in the destroyer Waters, and for three months thereafter was a student at the Naval Torpedo School in San Diego, California. During the period June 1933 to April 1936 he continued as sea duty in units of the Battle Force, with successive service as Torpedo Officer of the destroyer Hale; Ship’s Service Officer and Assistant Communications Officer of USS Langley, a unit of Carrier Division ONE; and Torpedo and Catapult Officer of USS Richmond, of Cruiser Division 2.

In May 1936 he reported as Assistant to the Executive Officer of USS Cole, operating with Destroyers, Scouting Force, and upon detachment in June 1936 returned to Annapolis as a student in General Line at the Naval Postgraduate School. He joined USS Minneapolis in August 1938, and after five months service as Engineering Divisions Officer, was transferred to USS Wilson, then building at Bremerton, Washington. He served as her Engineering Officer during the period July 1939, when she was commissioned, to May 1941, and as her Executive Officer from June 1941 until May 1942.

From June 1942 until September 1943 he was Commanding Officer of USS Schenk, engaged in convoy duty in the Atlantic, and for outstanding service in that command, he received a Letter of Commendation, with Ribbon, from the Commander in Chief, Atlantic Fleet. In September and October 1943 he was a student at the Prospective Command School, Key West, Florida, and in November assumed command of USS Mertz. He was Commanding Officer of that destroyer during the occupation of the Marianas and Philippines Islands.

He was awarded the Bronze Star meal with Combat “V”, for “heroic achievement of a Close-in Fire Support Ship (the Mertz) in action against enemy Japanese forces at Saipan Island on June 14-15, 1944…”  The citation further states:  “Operating under difficult navigational conditions and in the face of repeated heavy enemy gunfire. Commander Estabrook skillfully maneuvered his ship through dangerous waters and effectively directed accurate, concentrated fire against hostile shore batteries, contributing essentially to the success of our forces in the accomplishment of a vital mission…”

Detached from the Mertz in February 1945, he returned to the Naval Academy in May of that year for a tour of duty as Executive Officer (and Battalion Officer). His assignment completed in December 1947, he served for a year following as Commanding Officer of USS Uvalde, assigned to occupation duty in the Asiatic area. In February 1949, after again returning to the United States, he reported to the Navy Department, Washington, DC, for duty until February, as Head of Budget and Planning, Research and Development Division, Bureau of Ships.

During the period March to December 1952, he commanded USS Navarro, and in January 1953 he reported to the Commander, Alaskan Sea Frontier, for duty in Logistics, as Inspector General, SEVEN-TEENTH Naval District. He next served as Planning Officer in the first Naval District (headquarters at Boston, Massachusetts) and in February 1958, was ordered to duty as Chief of the Naval Section, Military Assistance Advisory Group Republic of Germany with headquarters in Bonn.