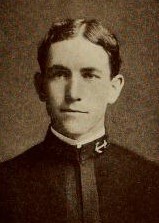 Warren Gerald Child was born in Harrisville, Utah, November 7, 1883, and was appointed to the US Naval Academy from that state in June, 1903. He was graduated with the Class of 1907, commissioned Ensign September 13, 1908, and was prompted through the grade to the rank of Captain to date from February 1, 1933. He was retired from active duty in the Navy December 1, 1937, and died on June 7, 1938 in Naval Hospital, San Diego, California.

He was ordered in January, 1913 as Assistant to the Inspector of Machinery, at Fore River (Massachusetts) Shipbuilding Company, and after one year in that assignment, he reported aboard the USS Prairie, flagship of Commander, Submarine Flotilla, Atlantic Fleet, and served as Aide until, in April, 1915, he was designated a student naval aviator, and attached to the Navy Department, Bureau of Steam Engineering in connection with aeronautics. He qualified as a Naval Aviator (seaplanes) on April 29, 1916, as a free balloon pilot on October 7, 1917, and dirigible pilot October 18, 1917.

While on duty in the Navy Department in the spring of 1917 the United States declared war with Germany, and Captain Child was named a member of the special board to visit foreign countries in connection with aircraft. Upon completion of this temporary duty September, 1917, he returned to the Navy Department, and when detached in October, he was assigned to command the Naval Air Station, Rockaway, Long Island, New York. From February to August, 1918 he was assigned to duty with the U.S. Naval Aviation Forces, Paris, France, operating throughout the war area of France. He received a Letter of Commendation from the Navy Department, stating “As the officer in charge of the Technical Division of the Aviation Section of the Force Commander’s Staff, he performed meritorious service.” From August 1918 until January 1919 he served on the staff of the Force Commander, in London. He also received a letter of recognition from the Lord Commissioners of the British Admiralty for services in connection with the Allied Naval Armistice Commission.

After the World War, Captain Child served in the Officer of the Chief of Naval Operations, Navy Department, from February, 1919 until July, 1920. He then had duty as Executive Officer of the USS Shawmut aircraft tender, and in December, 1921 transferred to the USS Wright. From September, 1922 until July, 1924, he served as General Inspector of Naval Aircraft, Eastern District, at Garden City, Long Island, New York. He then served a tour in the aircraft carrier Langley, and from January to July, 1926 was attached to Aircraft Squadrons, Battle Fleet.

From July, 1926 until June, 1929 he served as Superintendent of Flight Schools at the Naval Air Station, Pensacola, Florida. Returning to duty at sea, he assumed command of the USS Aroostook, tender for Aircraft Squadrons, Battle Fleet. When the Aroostook was decommissioned in 1930 and the Fleet reorganized, he was assigned as Aide for Aviation on the staff of the Commander, Base Force, USS Argonne, flagship.

From July, 1931 to December, 1933, he was Commanding Officer of the Naval Air Station, Anacostia, DC he had a second tour of duty in the Langley, this time in command from December, 1933 to June, 1935, and then assumed command of the Naval Station, Norfolk, Virginia where he was serving when relieved of all active duty in the summer of 1937. He retirement became effective the following December.

In addition to the commendation mentioned, Captain Child had the Victory Medal with Aviation Clasp.