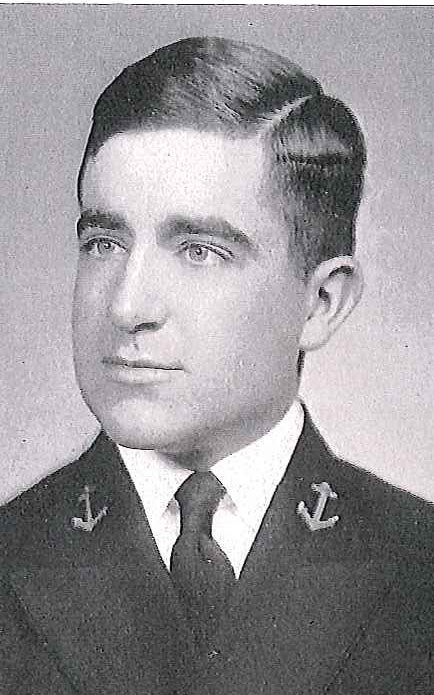 Louis Mitchell Detweiler was born in Rolla, Missouri, on August 1, 1912, son of Milan H. and Grace Ann (Mitchell) Detweiler. He attended Zeigler Community High School, Zeigler, Illinois, and had a year at Southern Illinois Normal University at Carbondale before entering the US Naval Academy, Annapolis, Maryland, on June 15, 1931. As a Midshipman he participated in wrestling and soccer. Graduated with the degree of Bachelor of Science and commissioned Ensign on June 6, 1935, he subsequently advanced in rank to that of Captain, his date of rank November 1, 1953.

After graduation from the Naval Academy he had a year’s duty afloat assigned to USS Chicago, Flagship of Cruisers, Scouting Force and Cruiser Division 5, operating in the Pacific, serving in the Engineering and Gunnery Department while aboard. He was a student at the US Navy Finance and Supply School, Navy Yard, Philadelphia, Pennsylvania, from September 1936 until May 1937, and for six months thereafter was Assistant for Disbursing aboard USS Altair, Tender for Destroyers, Battle Force.

In January 1938 he reported as Disbursing Officer of USS Williamson, and served similarly in USS Dale from June 1938 until July 1939, both destroyers operating in the Pacific. He next had a tour of shore duty as Assistant to the Supply Officer at the Naval Supply Depot, San Diego, California, and from March 1940 to October 1941 he was stationed at San Clemente Island, California, as Supply, Accounting, Disbursing and Commissary Officer. In November 1941 he joined USS St. Louis as Supply Officer, and was aboard that cruiser at Pearl Harbor, TH, during the Japanese attack on December 7, 1941. In her he later participated in numerous strikes against the Japanese at Guadalcanal, Munda, Kolombangara, and other Japanese strongholds.

He has the Ribbon for, and a facsimile of, the Navy Unit Commendation awarded USS St. Louis “For outstanding heroism in action against enemy Japanese forces during the Battles of Kula Gulf and Kolombangara, from July 5 to 13, 1943…” and further action later in the war period. The citation ends with “A resolute and sturdy veteran, complemented by skilled and aggressive officers and men, the St. Louis rendered distinctive service, sustaining and enhancing the finest traditions of the US Naval Service.”

Upon his return to the United States in October 1943, he reported as Assistant to the Supply Officer at the Navy Yard, Puget Sound, Washington. In December 1944 he returned to Pearl Harbor, TH, to serve as Supply, Accounting and Commissary Officer at the Submarine Base there, and as Supply Officer on the Staff of Commander Submarines, Pacific. Detached in June 1947, he had duty during the next two years in the Storage Division of the Bureau of Supplies and Accounts, Navy Department, Washington, DC. From June 1949 to November 1951 he was Assistant Disbursing Officer for the Ninth Naval District.

In December 1951 he reported as Executive Officer of the Naval Supply Depot, Guam, Marianas Islands, and, detached in September 1953, returned to the United States for duty as Officer in Charge of the Advance Base Supply Depot as Davisville, Rhode Island, his present assignment.