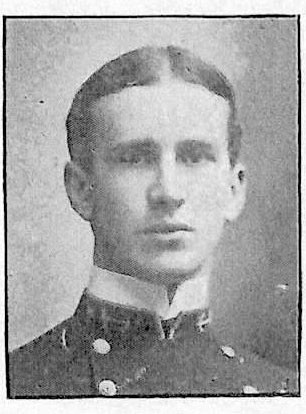 Ernest Joseph King was born in Lorain, Ohio, on November 23, 1878, son of James C. and Elizabeth Keam King. He attended Lorain High School before his appointment in 1897 to the U.S. Naval Academy, Annapolis, Maryland, by the Honorable Winfield Scott Kerr of Mansfield, Ohio, Representative from the Fourteenth District of Ohio. In July and August 1898, during the Spanish American War, he served in the grade of Naval Cadet in USS San Francisco, flagship of the Northern Patrol Squadron. Graduated with distinction in the Class of 1901, he served the two years at sea then required by law before commissioning, and was commissioned Ensign to rank from June 7, 1903. With subsequent promotions he attained the rank of Rear Admiral to date from April 26, 1993. He served as Vice Admiral in 1938-1939, was appointed Admiral in 1941, and Fleet Admiral to date from December 17, 1944.

After graduation from the Naval Academy in 1901, he served successively in USS Eagle, converted gunboat, engaged in the survey of Cienfuegos, Cuba; in USS Cincinnati, a protected cruiser employed in the Asiatic Fleet during the Russo-Japanese War; and in USS Illinois, flagship of the European Squadron. Rejoining the Cincinnati in January 1903, he cruised in that vessel to Asiatic waters. He returned to the United States in August 1905 for duty in USS Alabama, flagship of the Second Division Atlantic Fleet.

On duty at the Naval Academy from September 1906 until June 1909, he served for two years as instructor in the Department of Ordnance and Gunnery, and one year on the Executive Staff. He next served as Aide on the staff of Commander, Second Division, Atlantic Fleet USS Minnesota, flagship), and in March 1910 was transferred to USS New Hampshire, with duty as first assistant to the Senior Engineer Officer. From June 1911 until June 1912 he had duty as Aide and Flag Secretary on the staff of Commander in Chief, US Atlantic Fleet (USS Connecticut, flagship).

From June 1912 until April 1914 he had shore duty at the Engineering Experimental Station, Annapolis, Maryland. Upon detachment he reported to the destroyer Terry for his first command. On July 18, 1914 he was transferred to command of USS Cassin, and on August 10 was assigned additional duty as Aide to Commander Torpedo Flotilla, Atlantic Fleet. From June until December 1915 he had command of the Sixth Division, Torpedo Flotilla, Atlantic Fleet, with his pennant in the Cassin. He then served on the staff of the Second in Command, Atlantic Fleet (Admiral H.T. Mayo, USN).

During the World War I period, he continued staff duty as Aide and Squadron Engineer Officer in the flagship Arkansas, and later USS Wyoming and USS Pennsylvania, while Admiral Mayo served as Commander in Chief, US Atlantic Fleet. He was awarded the Navy Cross “For Distinguished service in the line of his profession as Assistant Chief of Staff for the Commander in Chief, US Atlantic Fleet.

In the rank of Captain, Fleet Admiral King served as Head of the Postgraduate Department, US Naval Academy, from May 1919 until July 1921, and the succeeding year commanded USS Bridge. In July 1922 he reported for duty on the staff of Commander, Submarine Flotillas, Atlantic Fleet, and on November 20, 1922 assumed command of Submarine Division Eleven, with additional duty from April 1923 as Commander, Submarine Division Three. From September 1923 until July 1926 he had command of the Submarine Base, New London, Connecticut, and Submarines based at New London, and also served as Naval Inspector or Ordnance in Charge, Navy Mine Depot, New London. During that tour of duty he was in charge of the Salvage of the USS S-51 which was sunk off Block Island, September 25, 1925. He was awarded the Distinguished Service Medal “For exceptionally meritorious service in a duty of great responsibility as officer in charge of the salvaging of the USS S-51.”

On July 28, 1926 he assumed command of the aircraft tender Wright, with additional duty as Senior Aide on the staff of Commander, Aircraft Squadrons, Scouting Fleet, Detached in January 1927, he reported to the Naval Air Station, Pensacola, Florida, for flight training, and was designated Naval Aviator #3368 on May 26, 1927. He rejoined the Wright in June 1927 to serve as Commanding Officer until June 1928. When USS S-4 was sunk off Provincetown, Massachusetts, in December 1927, he was assigned temporary duty in command of the Salvage Force that raised that submarine.

He was awarded a Gold Star in lieu of a second Distinguished Service Medal for “exceptionally meritorious service in a duty of great responsibility as Commanding Officer of the Salvage Force entrusted with the raising of the USS S-4 sunk as a result of a citation continues:   “Largely through his untiring energy efficient administration and judicious decisions this most difficult task, under extremely adverse conditions, was brought to a prompt and successful conclusion.”

After serving as Commander, Aircraft Squadrons, Scouting Fleet, from June 1 until August 2, 1928, he was named Assistant Chief of the Bureau of Aeronautics, Navy Department, Washington, D.C.. and served in that capacity from August 1928 until April 1929. He commanded the Naval Air Station, Norfolk, Virginia, the next year, and in June 1930 assumed command of USS Lexington, which he commanded for two years. He completed the senior course at the Naval War College, Newport, Rhode Island, in April 1933, after which, with the rank of Rear Admiral, he served as Chief of the Bureau of Aeronautics, Navy Department, until June 1936.

During the period June 1936 until September 1937, he ad duty as Commander of Aircraft, Base Force, and for four months thereafter was Commander, Aircraft Scouting Force, with additional duty as Commander Patrol Wing ONE.  In January 1938 he was designated Commander Aircraft. Battle Force, with the accompanying rank of Vice Admiral. In August 1939, in his permanent rank of Rear Admiral, he reported for duty as a member of the General Board of the Navy, and in December 1940 returned to sea as Commander Patrol Force, US Fleet.

On February 1, 1941 he was designated Commander in Chief, Atlantic Fleet, to serve in the rank of Admiral. He was appointed Commander in Chief of the United States Fleet on December 20, 1941, and assumed command December 30, 1941. The duties pf Commander in Chief, United States Fleet, and Chief of Naval Operations, were combined under Executive Order of March 12, 1942, and the next day he was nominated Chief of Naval Operations by President Roosevelt, and confirmed to that Office by the Senate for a term of four years from March 18, 1942.

“. . . In his dual capacity, (he) exercised complete military control of the Naval forces of the United States Navy, Marine Corps and Coast Gruard[sic] and directed all activities of these forces in conjunction with the U.S. Army and out Allies to bring victory to the United States. As the United States Naval Member of the Joint Chief of Staff and the Combined Chiefs of Staff, he coordinated the naval strength of this country with all agencies of the United States and of the Allied Nations, and with exceptional vision, driving energy, and uncompromising devotion to duty, he fulfilled his tremendous responsibility of command and direction of the greatest naval force the world has ever seen and the simultaneous expansion of all naval facilities in the prosecution of the war . . .”

On December 15, 1945, Fleet Admiral King was relieved by Fleet Admiral Chester W. Nimitz, USN, as Chief of Naval Operations, Navy Department, Washington, DC, and from that time has served in an advisory capacity in the Office of the Secretary of the Navy. He died at the Naval Hospital, Portsmouth, New Hampshire, on June 25, 1956.

He had also been awarded the Grand Lodge Medal for Distinguished Achievement, by the Grand Lodge of Free and Accepted Masons of the State of New York; the Pennsylvania Society (of New York City) Gold Medal for Distinguished Achievement, and the American Legion Distinguished Service Medal. The following honorary degrees have been conferred upon him: Doctor of Laws, by the College of William and Mary. Harvard University, Northwestern University, Princeton University, and Miami University (Oxford, Ohio): Doctor of Science by Bowdoin College; and Doctor of Civil Law by Oxford University (England). He received the Gold Medal for the Prize Essay awarded by the US Naval Institute, in 1909.