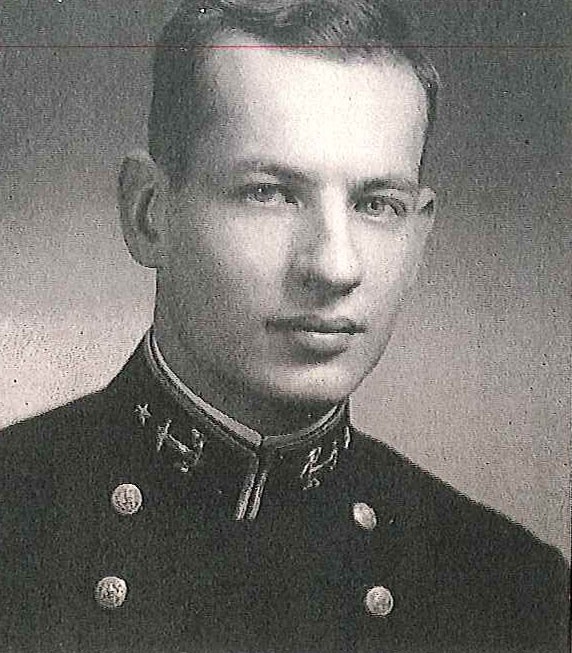 Hugh Arthur Benton was born in Charlottesville, Virginia, on October 25, 1929, son of Arthur F. and Marion King (Duncan) Benton (now deceased). He attended the University of Rochester, Rochester, New York, where he was a member of the Naval Reserve Officers Training Corps Unit for one year. In 1948 he entered the US Naval Academy, Annapolis, Maryland, on appointment from his native state. He was graduated and commissioned Ensign on June 6, 1952, and subsequently advanced in rank to that of Captain, to date from November 18, 1970. His selection for the rank of Rear Admiral was approved by the President on January 30, 1974.

Following graduation from the Naval Academy in 1952, he served as Third Division Junior Officer on board USS Princeton (CVA-37), which operated with Task Force SEVENTY-SEVEN in the Korean area of hostilities. He is entitled to the Ribbon for the Navy Unit Commendation awarded that aircraft carrier. From July to December 1954 he had instruction at the Submarine School, New London, Connecticut, then joined USS Dogfish (SS-350) to serve as Communications Officer, Gunnery Officer, First Lieutenant and Assistant Engineering Officer. In July 1957 he returned to the Submarine School for the Advanced Nuclear Power Course and in December that year reported for instruction in the operation of a nuclear power plant at the Nuclear Power Training Unit, Idaho Falls, Idaho. During the period June to September 1958, he was Supply and Commissary Officer with the Pre-Commissioning Detail of USS Skipjack (SSN-585) and had duty as Supply and Commissary Officer, Communications Officer, and Operations Officer from the commissioning of that nuclear power submarine on April 15, 1959. He is entitled to the Ribbon for the Navy Unit Commendation awarded USS Skipjack.

Following instruction until January 1961 at the Pittsburgh Naval Reactor Operations Office, Atomic Energy Commission, Pittsburg, Pennsylvania, he joined the Pre-commissioning Detail of USS Permit (SSN-594) in March 1961 and became Engineering Officer of that nuclear power submarine upon her commissioning, May 29, 1962. After instruction, March to May 1963, at the Naval Guided Missile School, Dam Neck, Virginia, he reported as Executive Officer of the Gold Crew of USS Henry Clay (SSBN-625). Assigned to the Bureau of Naval Personnel, Navy Department, Washington, DC in June 1965, he was Assistant Submarine/Nuclear Power Placement Officer.

From May to October 1967, he had successive periods of training attached to Commander Submarine Group, San Francisco, California; Commander Submarine Force, US Pacific Fleet and in the Office of the Director, Division of Naval Reactors, Atomic Energy Commission, Washington, DC. He next had several months’ temporary duty with Commander Submarine Squadron SEVEN. In January 1968 he assumed command of USS Guardfish (SSN-612). “For exceptionally meritorious conduct…during the fall of 1968” in that capacity, he was awarded the Legion of Merit and “for outstanding meritorious achievement during the fall of 1969…” in the same assignment he was awarded the Meritorious Service Medal.

During the period November 1970 to May 1972 he served as Senior Member of the Naval Nuclear Propulsion Examining Board on the Staff of the Commander in Chief, US Pacific Fleet and “for exceptionally meritorious conduct…” in that capacity was awarded a Gold Star in lieu of the Second Legion of Merit. The citation states in part:

“…Captain Benton, through skillful organization and expert direction of the Examining Board, produced a highly professional inspection team, extremely proficient in meeting the Fleet Commander’s responsibilities for insuring that naval nuclear-powered ships are operated in accordance with approved procedures and only by qualified operating personnel. His insistence on firm adherence to approved procedures and a high level of proficiency in plant operation and maintenance made significant contributions to the propulsion plant readiness of nuclear-powered ships of the US Pacific Fleet…”

In May he assumed command of Submarine Squadron FIFTEEN and in April 1974 was ordered detached for duty as Director of Logistics on the Staff of the Commander in Chief, Pacific.