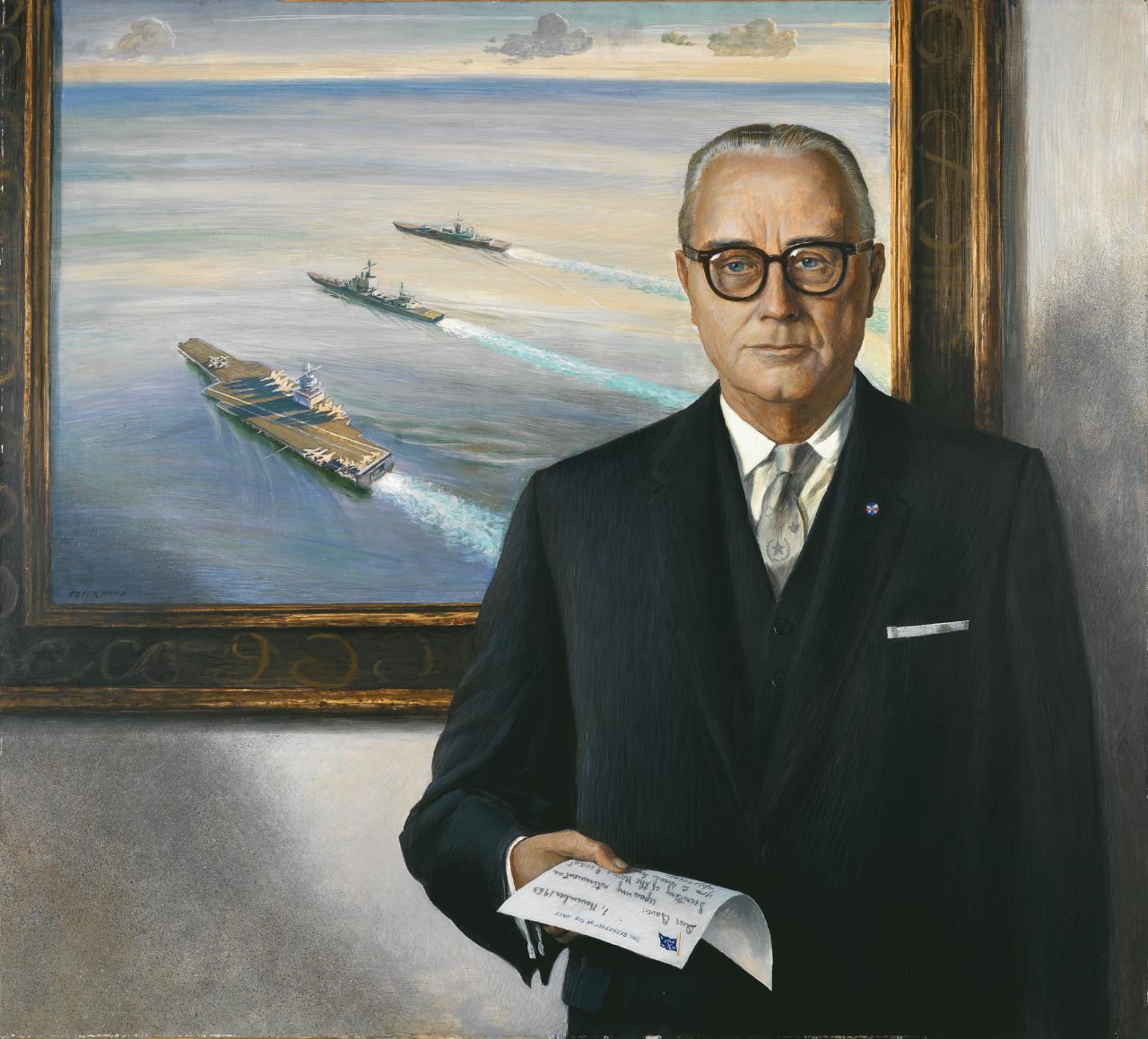 Fred H. Korth was appointed Secretary of the Navy by President Kennedy on 11 December 1961, to succeed John B. Connally, who resigned  after one year in office to return to Texas as a Gubernatorial candidate. He takes the Oath of Office on 20 January 1962, the effective  date of Mr. Connally's resignation.

Mr. Korth was born in Yorktown, Texas, on 9 September 1909, son of Fritz R.J. Korth and Mrs. (Eleanor Marie Stark) Korth. He was graduated with the degree of Bachelor of Arts from the University of Texas in 1932, and in 1935 received the Bachelor of Laws degree from George  Washington University, Washington, DC. He was admitted to the Texas and District of Columbia Bars, and subsequently practiced law in Fort  Worth, Texas, first with the firms of Thompson and Barwise, later as a partner in the firm of Wallace and Korth. In 1953 he was elected  Executive Vice President of Continental National Bank, Fort Worth, and since 1959 has been its President.

Commissioned a Second Lieutenant in the Army Air Corps in August 1942, he completed officers' training at Miami Beach, Florida, and served at Hensley and Love Fields in Texas, and at Fairfax Field, Kansas. His last assignment during World War II was to the Ferrying Division of the Air Transport Command, at Cincinnati, Ohio, where he was Chief of Staff for Personnel until released from active duty, in the rank of  Lieutenant Colonel, in January 1946.

In March 1951 Mr. Korth was called to Washington by Secretary of the Army Frank Pace, with whom he’d seen war service, and remained to  serve a year as Deputy Counselor, Department of the Army. On 22 May 1952, he was sworn into office as Assistant Secretary of the Army  (Manpower), having been nominated by President Truman in April and confirmed by the Senate, 16 May 1952. For exceptional service during  the next year, he was awarded the Distinguished Civilian Service Award by the Department of the Army.

In addition to his law and bank affiliations, Mr. Korth has been a director of All States Life Insurance Company and of Professional and  Business Men's Life Insurance Company; Treasurer of Fort Worth Air Terminal Corporation, a member of the Texas AEC; and President of  United Fund, Fort Worth, Tarrant County (1957- 1958). He is a director of Texas and Southwestern Exposition and Fat Stock Show, Fort Worth; member of the Advisory Board of Texas University; trustee of Hockaday School for Girls, Dallas; and is a member of the following: