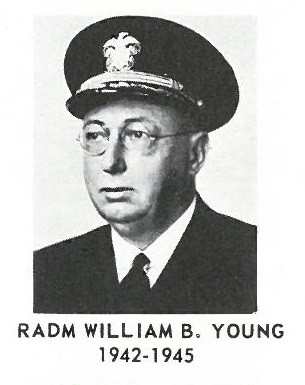 William Brent Young was born in Washington, DC on 18 June 1888, son of William Brent and Alice Catherine (Jones) Young.  He was educated in schools of the District of Columbia and in 1915 received the degree of Bachelor of Laws from Georgetown University Law School, Washington, DC. (That university honored him with the degree of Doctor of Laws in 1943). He was admitted to the District Bar and practiced law in the District until June 1917. As a member of the Pay Corps (now Supply Corps) Reserve, he was ordered into active naval service and in July 1917 joined the USS Newport News, operating as Outside Superintendent of the Supply Department at the Philadelphia (Pennsylvania) Navy Yard and was in Charge of a large force of men loading and unloading war material and expediting shipment of our expeditionary forces.

Reporting for active duty in June 1921, he was assigned for a month to the Supply Department at the Naval Shipyard, Philadelphia, Pennsylvania, after which he had duty as Supply Officer on the staff of Commander Division TWENTY-EIGHT, Destroyer Force, Atlantic, and between February 1922 and May 1924 continued service afloat as Supply Officer of the USS Asheville, operating with the Asiatic Fleet.  Following brief assignments at the Naval Station, Cavite, Philippine Islands; in the Eleventh Naval District (San Diego, California), and at the Receiving Barracks, Hampton Roads, Virginia, he was assigned in October 1924 to the Supply Department at the Navy Yard, Washington, DC.  In October 1925 he reported as Assistant to the General Inspector of the Supply Corps, East Coast and in that capacity inspected the activities of many naval stations and naval vessels in matters pertaining to supply, disbursing and accounting.

He was Supply Officer of the USS Vestal from August 1929 to August 1931 and upon completion of the course at the Army Industrial College in June 1932, returned to the duty in the Bureau of Supplies and Accounts.  For the next three years (July 1932-August 1935) his duties as Liaison Officer of that Bureau involved maintaining contact with the Comptroller General of the United States and with the General Accounting Office.  He next served as Supply Officer of the USS Henderson, a Naval transport which operated from the East Coast to ports in the Far East, and in August 1937 was assigned to the Planning Division in the Bureau of Supplies and Accounts, Navy Department.  During this tour of duty he was appointed Lend Lease Liaison Officer for the Bureau.

In April 1941 he became Supply Officer on the staff of Commander Train, Atlantic Fleet.  In this position, Rear Admiral Young (then Commander) had charge of coordinating logistics policies and plans, supervision of general services to the Fleet, standardization of supply organizations and procedures, inspection of supply activities of the Fleet and Fleet supply activities ashore.  He also handled many war-born problems, including logistical planning in the occupation of Iceland.  “For exceptionally meritorious conduct…as Fleet Supply Officer, Atlantic Fleet, during the period April 1941 to May 1942…” he was awarded the Legion of Merit.  The citation continues in part:

“During this period of intense activity in the Atlantic, the establishment of numerous new bases, and the ever increasing overseas movements of troops and supplies, Rear Admiral (then Commander) William B. Young displayed remarkable ability and foresight in the over-all planning of the logistic phases of the Atlantic operations.  Due to his comprehensive knowledge, initiative, and tireless efforts, the supply problems in this theater were successfully solved during this tour of duty as Fleet Supply Officer…”

Rear Admiral Young frequently emphasized the fact that the only purpose of the forces ashore is to serve the forces afloat.  Intolerant of “red tape” and traditions which hamper efficiency, he pressed this policy by initiating many changes in the Navy’s procurement and accounting methods to expedite service to the Fleets.  “We can account with the Fleet or fight with it and I say we fight,’ he declared on assuming duty.

As Chief of the Bureau of Supplies and Accounts he made several inspections of Supply activities in the field.  After the outbreak of the war he made a 24,000-mile flight to the Pacific and South Pacific areas to investigate the speed and efficiency with which naval supplies were reaching the fighting forces.

Later he visited the European and Mediterranean Areas, Panama Canal Zone, naval activities throughout the Caribbean and supply bases along the coast of South America.  He was awarded a Gold Star in lieu of a Second Legion of Merit and cited as follows:

“For…outstanding services…as Chief of the Bureau of Supplies and Accounts and Paymaster General of the Navy from June 1942 to March 1945.  A resourceful leader in discharging great responsibilities, Rear Admiral Young displayed marked administrative ability in establishing effective accounting techniques and in directing the rapid procurement, warehousing and issuing of the infinitely varied supplies of the Navy’s system of supply, storage and accounting contributed materially to the successful prosecution of the war.”

On 8 March 1945, Rear Admiral Young was detached as Chief of the Bureau of Supplies and Accounts, reporting the same day to the Secretary of the Navy, Navy Department, for duty as Assistant Commissioner, Office of the Army-Navy Liquidation Commission.  This commission was established 20 February 1945, by Secretary of the Navy James Forrestal and Secretary of War Henry L. Stimson to function for the Navy and War Departments in disposal of surplus property located outside the continental confines of the United States, its territories and possessions.  In December 1945 he was designated Assistant Commissioner of the Foreign Liquidation Commission, Department of State, Washington, DC, where he continued to serve until relieved of all active duty pending his retirement, effective 1 October 1946.

Rear Admiral Young died at the US Naval Hospital, Bethesda, Maryland on 15 August 1959.  Services were held at Fort Myer Chapel, Arlington, Virginia on 18 August, and he was buried in Arlington National Cemetery.