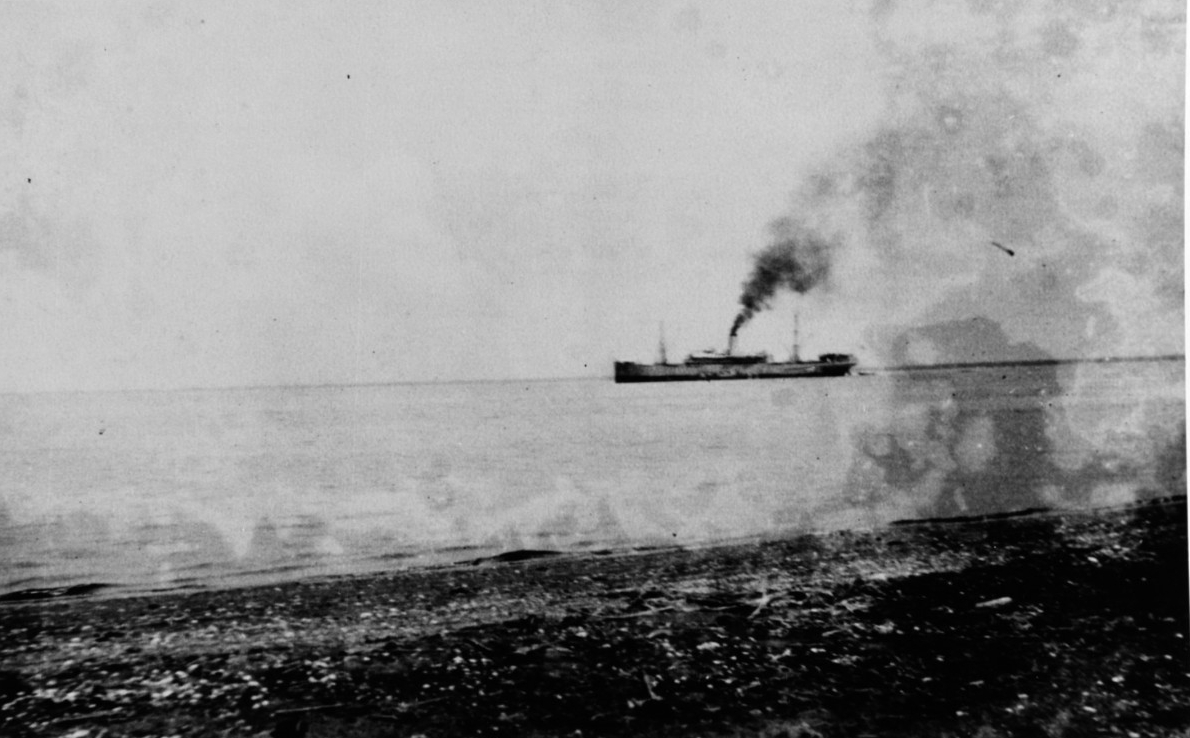 Newport News (AK-3) waiting off Wake Island on 24 September 1922, prior to putting ashore a large cache of fresh water and provisions for use in the event of a ship wreck there. This mission occurred during a period in which few ships passed Wake Island. Received from the U.S. Naval Library, Treasure Island Naval Station, California, 1969. U.S. Naval History and Heritage Command photograph, NH 67755.

A city in Warwick County, Va. which is one of the world's great ship building centers.

The first Newport News, a cargo ship built in 1904 by Flensburg Shipbuilding Co., Flensburg, Germany, was taken over as Odenwald by the U.S. Navy from the Hamburg-American Line in compliance with Executive Order dated 14 May 1917; renamed Newport News and commissioned 14 July 1917, Lt. Comdr. John Allison, USNRF, in command.

Newport News operated on transatlantic supply runs until assigned to NOTS 9 January 1918. Returning to Hampton Roads from Europe 2 February, she carried coal to Boston before sailing from New York 24 March laden with military supplies for England, arriving Liverpool on the 22nd. After discharging her cargo at Liverpool, Dublin, and Queenstown, she got underway for the United States 18 May, arriving Philadelphia on the 31st.

In subsequent months, Newport News made three more voyages to European ports with mixed cargoes. Her last took her from New York to Gibraltar in April 1919. After unloading there, she took on food, clothing and other supplies and steamed to Constantinople to relieve famine and wide spread suffering in the Middle East. Returning to Norfolk via Gibraltar 27 June, Newport News was detached from NOTS.

The cargo ship departed Hampton Roads 12 July and steamed via the Panama Canal for the Pacific, arriving Mare Island 5 August. She operated on supply runs, primarily to the Far East, until decommissioning at U.S. Navy Yard, Puget Sound, Wash. 1 August 1924. Struck from the Navy List the same day, Newport News was sold 4 April 1925 to John F. Blaine of Berkeley, Calif. for scrapping.