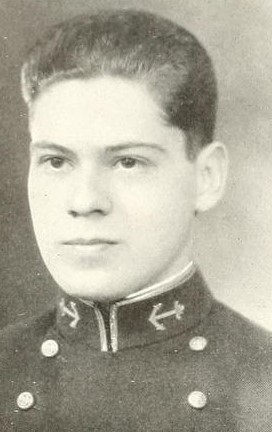 Harry Sheldon Atherton was born in New York, New York, on December 31, 1909, son of Mr. and Mrs. Harry H (Lucile Blake) Atherton. He attended Central High School in Springfield, Massachusetts, and Columbian Preparatory, Washington, DC, and before entering the US Naval Academy, Annapolis, Maryland, in 1929 he was enlisted in the US Naval Reserve as Seaman, second class, the year May 1928- July 1929. Upon graduating in 1933, he was commissioned Ensign in the Naval Reserve, reentering the US Navy in that rank in July, 1934. He was transferred to the Supply Corps of the Navy in May, 1938, and by subsequent promotions attained the rank of Commander as of January 1, 1944.

When detached from the Naval Academy in 1933, he joined the Merchant Marine, a licensed Second Mate, while making a five month round the world cruise. From January to July, 1934, he was employed as an Engineer in the Assessor’s Office in Springfield, Massachusetts.

In July, 1934 he joined the USS Lexington on the West Coast, and was under instruction in all department of that aircraft carrier and from April, 1936 to February, 937 was in charge of “B” Engineering Division (175 men, 16 boilers, 2 evaporators, all fuel and water tanks). Transferring to the USS New York for duty during passage to the East Coast, he was then ordered to the Naval Finance and Supply School, Philadelphia, Pa., for duty under instruction the year May 1937-1938, and upon completion of the course was ordered to the Asiatic Fleet. He joined the USS Tulsa as Supply Officer of that gunboat which was assigned independent duty in South China coastal waters, serving the two years August 1938-1940.

Returning to the West Coast in October, 1940, he reported in the Navy Yard, Mare Island, California, for duty as Assistant t the Supply Officer, Incoming Stores Group. When detached in September, 1942, he had orders to the cruiser Birmingham commissioning detail and as Supply Officer on board after her commissioning. She joined the Atlantic Fleet in European waters. He then served as Assistant to the Gunnery Officer for the After Main Battery (6 inch), independently directing the fire in the Sicilian campaign and later in the Pacific in actions including the Wake and Tarawa strikes; the first Battle of the Philippine Sea: all Marianas engagements (Saipan, Guam, and Tinian:) and the air action off Bougainville.

Detached from the Birmingham in August, 1944, he returned to the United States, and the following October reported in the Naval Supply Depot, San Pedro, California, for duty as Supply Officer in Charge, Incoming Stores, Service, and as Executive Officer, serving there two years. “For outstanding performance” he was awarded by the Secretary of the Navy the Letter of Commendation with Ribbon, for the period November 6, 1944 to August 31, 1945. The citation states in part: with exceptional administrative ability and resourceful initiative, Commander Atherton coordinated the many sections of his division into a highly efficient, smoothly operating unit, placing special emphasis on the rapid, accurate handling of all public vouchers, correspondence and procurement papers, and this timely disposition of supplies. He was also responsible for effecting improvements in the civilian personnel administration and for invaluable assistance in the solution of numerous supply problems confronting the Depot…. (He) contributed materially to the success of the Naval Supply Depot in meeting the urgent demands of the Fleet and Advanced Bases in the Pacific theater for material vital to the procession of the war….”

Assigned as Supply Member of the US Naval Mission to Brazil, he served from January, 1947 to June, 1949 in Rio de Janeiro. The two years July, 1949-1951, he served as Supply and Fiscal Officer of the Submarine Base, New London, Connecticut. He then became Assistant District Supply Officer, 14th Naval District, at Pearl Harbor T.H., his current assignment.