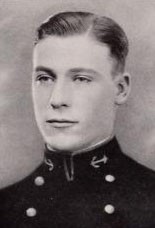 William Arthur Cockwell was born in County Kent, England, on August 28, 1905, son of Mrs. Gertrude Edith Anne (Arthur) Cockwell. He received his primary education in public schools of Oswego, New York, and entered the US Naval Academy, Annapolis, Maryland, from New York on September 2, 1924. As a Midshipman he played basketball and lacrosse, and was on the varsity soccer squad as a First Classman. Graduated and commissioned Ensign on June 7, 1928, he advanced progressively to the rank of Captain, to date from March 25, 1945.

After graduation from the Naval Academy in June 1928, he was assigned to the USS Mississippi, a unit of Battle Force, operating off the West Coast, and served as a junior officer (gunnery and engineering) of that battleship until late in 1930. He continued to sea duty in the destroyer William B. Preston from January to June 1931, after which he reported to the Naval Air Station, Lakehurst, New Jersey, for lighter-than-air training and duty until 1934. During that period he was designated Naval Aviator (airship) in July 1932, and flew in the crews of the airships USS Macon, USS Los Angeles and USS Akron. As pilot of the J-3, he assisted in the search for survivors of the Akron when that airship was forced down at sea off the New Jersey Coast in April 1933.

Returning to the Pacific in September 1934, he served until June 1937 as Gunnery and Torpedo Officer of the USS Marblehead, operating with Cruiser Division 4, Battle Force. A tour of duty as Flight instructor at the Naval Air Station, Lakehurst, New Jersey, was followed by further duty in the Pacific, this time aboard the destroyer Fanning, a unit of Destroyers, Battle Force, serving successively as Gunnery Officer, First Lieutenant and Executive Officer.

After the United States entered World War II in December 1941 he was recalled to Lakehurst, where the non-rigid airships came into prominence as an effective weapon against German U-boat attacks, on vital United States shipping lines in the Atlantic. Reporting there in February 1942, he was engaged in anti-submarine patrol duty for more than two years, serving first as a flight officer, later in command of an airship squadron, and finally as a training officer on the staff of Commander, Airship Training Command.

For “exceptionally meritorious conduct… as Training Officer on the staff of Chief of Naval Airship Training and Experimentation during the period July 18, 1943 to May 25, 1944….” He received a Letter of Commendation Ribbon, from the Secretary of the Navy.

In the summer of 1944 he was ordered to the Pacific Theater as Commanding Officer of a destroyer, the USS Thatcher. There he participated in the Palau operations; the Philippine liberation campaign; the foray to the East China Sea and subsequent action off Corregidor in January 1945; and engagements for Panay and Cebu in the Philippines. For “heroic service… during a series of fueling operations in support of the Third Fleet attacks on enemy Japanese forces in the South China Sea, January 9 to 20, 1945….” He was awarded the Bronze Star Medal with Combat “V,”

He was awarded a Gold Star in lieu of a second Bronze Star Medal, for “meritorious achievement (in the same capacity) prior to an during operations against enemy Japanese forces on Corregidor in January 1945….” The citation continues in part: “Maneuvering his ship in waters made dangerous by shoals and enemy mines, Captain Cockwell closed Corregidor Island to point-blank range and directed gunfire in support of Army forces engaged in the recapture of the Island…”

In April 1945 he was designated Commander, Destroyer Division 108, and as such his division, from the Mcdermut, in support of the ground operations on Okinawa and air strikes on the Kyushu during the latter months of the war. For “meritorious achievement as Commanding Officer of the USS Thatcher, and as Commander Destroyer Division One Hundred Eight, in operations against enemy Japanese forces in the Pacific War Area from February to September 1945…” he was awarded a Gold Star in lieu of the Third Bronze Star Medal.

The citation further states in part: “…. As Commander Destroyer Division 108 he operated with a Fast Carrier Task Force in support of carrier strikes and bombardments of enemy strongholds and directed his ships in screening the Task Group against enemy submarine and in patrolling picket stations…. Contributed materially to the success of our operations in these strategic areas…”

Upon his return to the United States he was ordered in November 1945, to the Naval Airship Training and Experimentation Center Naval Air Station, Lakehurst, New Jersey. Detached in June 1948, he reported to Ohio State University, Columbus, Ohio, for postgraduate instruction in Personnel Administration and Training. He assumed command on October 11, 1949, of the USS Calienne (AO 53) and detached in July 1950, he reported for duty in the Bureau of Naval Personnel, Navy Department, Washington, where he remained for three years.