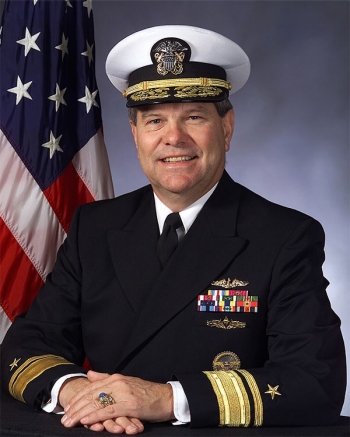 A native of South Carolina, Rear Admiral (retired) Young graduated from the US Naval Academy in June 1970. After receiving a master of science in Civil Engineering at the University of Delaware in May 1971, he completed the Navy's nuclear power training program.

Rear Admiral Young's first ship assignment was USS Ulysses S. Grant (SSBN 631B) from September 1972 to April 1974. He returned to Nuclear Power School, Bainbridge, Maryland, and taught in the Officer Department from April 1974 to March 1976. Subsequently he graduated from the Submarine Officer Advanced Course in September 1976 and was then assigned as the Engineer Officer on USS Plunger (SSN 595) from October 1976 to September 1979.

He next served as the Squadron Material Officer on the staff of Commander Submarine Squadron Sixteen in Kings Bay, Georgia. In March 1982, he reported to USS Sand Lance (SSN 660) as Executive Officer. Following this tour in December 1983, he was assigned as Director of Tactical Training at the Navy Fleet Ballistic Missile Submarine Training Center in Charleston, South Carolina.

Rear Admiral Young reported as the Prospective Commanding Officer of PCU San Juan (SSN 751) in new construction at Electric Boat Company in Groton, Connecticut, in May 1986. After completing his command tour on USS San Juan he served as Deputy Commander for Readiness and Training for Submarine Squadron Two from May 1989 to June 1990. Rear Admiral Young was Undersea Warfare Assistant Office Director for Advanced Submarine Technology in the Defense Advanced Research Projects Agency from 1990 to 1992. He relieved as Commanding Officer of USS Holland (AS 32) in April 1992 in Charleston, SC. In June 1992, Holland changed homeports to Guam in the western Pacific.

Returning to Washington, DC in August 1994, Rear Admiral Young assumed duties as Director, Resources and Evaluation on the staff of the Assistant Secretary of the Navy for Research, Development and Acquisition. He was the Program Manager for the Navy's Unmanned Undersea Vehicles Program Office from June 1995 to October 1997. From October 1997 to July 2001 he served as Deputy Commander, Naval Sea Systems Command, Undersea Technology. He was the Commander, Naval Undersea Warfare Center from October 1998 to July 2001. He served additional duty as the Vice Commander, Naval Sea Systems Command from August 1999 to January 2000 and was the Program Executive Officer for Undersea Warfare from February to April 2000.

Rear Admiral Young is a graduate of both the Program Management Course and the Executive Program Management Course at the Defense Systems Management College. He served as Vice Commander, Naval Sea Systems Command from April 2001 to July 2002. In July 2002, Rear Admiral Young began his final tour as the 11th Director of Strategic Systems Programs where he was responsible for all aspects of the research, development, production, logistics, storage, repair, and operational support of the Navy's Fleet Ballistic Missile Weapon Systems, which include the Trident I and II missiles and their associated shipboard subsystems. He was also the US Project Officer responsible for managing US Government support of the British Polaris/Trident Force.