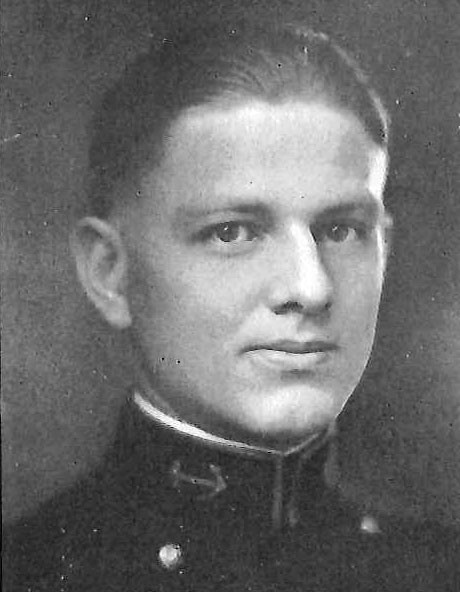 Edward Louis Beck was born in Darien (Genesse County), New York, on September 20, 1902, son of the late Louis E. and Katherine (Schaller) Beck. He attended Lancaster, New York, High School, and prior to his appointment to the US Naval Academy, Annapolis, Maryland, in 1921, prepared at Knox Starlings Preparatory School, also located there. As a Midshipman, he played “B” squad football one year, and was a member of the third varsity and class crew. He was graduated and commissioned Ensign on June 3, 1925, and through subsequent promotions, attained the rank of Captain, his date of rank August 3, 1944. He was transferred to the Retired List of the Navy on November 1, 1946, and promoted to Rear Admiral, on the basis of combat awards.

After graduation in June 1925, he was assigned to USS Memphis for three years, during which period he took the Australian cruise in 1925 and spent one year (1926-27), on European Station. He then served 31 months on Asiatic Station in USS Rizal, on Yangtze Patrol. Returning to the United States in December 1930, he joined USS Patoka in March 1931, and after his detachment in June 1932, reported to the Navy Yard, Philadelphia, Pennsylvania, for a tour of duty in the Navy Boiler Laboratory.

He joined USS Greer in May 1934, and from September 1935 until April 1936 served on the staff of Commander Destroyer Squadron ONE. Continuing duty afloat, he served for eight months as Executive Officer of USS Blakely, and for six months as Engineer Officer of USS Antares. He returned to the Navy Yard, Philadelphia, for a second tour of duty, from June 1937 to May 1939, and for fifteen months thereafter served as Communications Officer of USS Maryland, a unit of Battleship Division 4, Battle Force.

He next had charge of fitting out USS Chew (DD 106), and assumed command upon that destroyers commissioning on October 14, 1940. When the United States entered World War II in December 1941, he was transferred to command of USS Phelps (DD 360). He was awarded the Bronze Star Medal with Combat “V,” for meritorious achievement as Commanding Officer of the USS Phelps in action against enemy Japanese forces at Bougainville, February 20, 1942; Salamaua and Lae, March 10, 1942; the Battle of the Coral Sea from May 4 to 8, 1942; and the Battle of Midway from June 4 to 6, 1942…..”

Reporting to the Bath Iron Works, Bath, Maine, in November 1942, he commissioned USS Eaton (DD 510), the next month, and commanded her until September 1943. “For conspicuous gallantry and intrepidity as Commanding Officer of the USS Eaton in action against enemy Japanese forces in the New Georgia Area on August 15, 1943…..” he was awarded the Silver Star Medal. The citation states that he “efficiently directed the operations of his vessel as a unit of a task group assigned to cover vital landing activities at Vella Lavella…..”