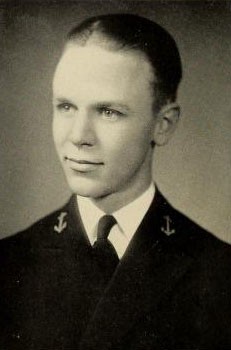 Cyrus Churchill Cole was born in Manila, Philippine Islands, on August 19, 1913, son of the later Rear Admiral Cyrus W. Cole, USN, and Mrs. (Juliana Busby) Cole. He attended San Diego, California, High School, and prepared for entrance to the Naval Academy, Annapolis, Maryland, at Severn School, Severna Park, Maryland. While a Midshipman, from 1931 to 1935, he was a member of the Crew and served in the staffs of the “Log” and Lucky Bag.” Graduated with the degree of Bachelor of Science and commissioned Ensign in the US Navy on June 6, 1935, he subsequently advanced to the rank of captain, to date from October 1, 1953.

After graduation from the Naval Academy in June 1935, he was assigned to the USS Maryland, serving as Assistant Navigator and Assistant Electrical Officer of the battleship until December 1936. In January 1937 he joined the USS Salt Lake City as Assistant First Lieutenant, and in May of that year was detached for six months instruction at the Submarine School, New London, Connecticut. After gradation he had one month’s service on board the USS R-14, and in January 1938 became Chief Engineer of the USS Stingray. He remained at sea in that submarine until August 1941, then returned to Annapolis for the course in Naval Engineering (Design) at the Naval Postgraduate School.

From June until November 1943 he was attached to the Submarine Command, Southwest Pacific, as Prospective Commanding Officer, and during that period made one war patrol on board the USS Silversides. He is therefore entitled to the Ribbon for the Presidential Unit Citation awarded that submarine “For outstanding performance in combat during her Fourth, Fifth, Seventh and Tenth War Patrols in enemy Japanese-controlled waters….” which resulted in the destruction of twenty-four enemy ships and extensive damage to twelve additional vessels.

He commanded the USS Balo during the period November 1943 until March 1944, and “For extraordinary as Commanding Officer (of that submarine) during a War Patrol of that vessel in enemy Japanese-controlled waters…” he awarded the Navy Cross. The citation continues: “Lieutenant Commander Cole penetrated the escort screens despite severe enemy opposition and launched a daring and aggressive torpedo attack to sink for enemy ships totaling more than 20,000 tons. Although severely depth charged and fired upon by enemy guns, he courageously and expertly directed his vessel and succeeded in bringing her to port without serious injury to the ship or crew.

In May 1944 he assumed command of the USS Spearfish, which he continued to command until February 1945. He was awarded the Legion of Merit with Combat “V” for “exceptionally meritorious conduct… (as her Commanding Officer) during a War Patrol of that vessel…” The citation further states: “At the first of this patrol his brilliant seamanship and perseverance enabled him to accomplish a special mission. During the latter part, seven Army airmen were rescued from a downed plane and an enemy ship was destroyed…”

Detached from command of the Spearfish in February 1945, he served from March until October of that year as Production Officer at the Submarine Base, Pearl Harbor, T.H. he then had consecutive service as Squadron Engineer for Submarine Squadrons 7 and 8, and in February 1947 for shore duty in the Navy Department, Washington, DC. There he served until June 1949 in the Bureau of Ships (Submarine Branch). He next had a year’s duty as Executive Officer of the USS Nereus, and from July 1950 until April 1951 had command of Submarine Division 31. He received a Letter of Commendation, with Ribbon, for meritorious service as Commander Task Group 96.9 (of Submarines, Western Pacific) during the Korean hostilities.

In April 1951 he returned to the Navy Department and, attached to the Office of the Chief of Naval Operations, served as Submarine Member of the Ships Characteristics Board. In August 1953 he reported as a student at the Industrial College of the Armed Force, Washington, DC, from which he was graduated in March 1954. In April he joined the Staff of Commander Submarine Force, Pacific, and from June 1955 until July 1956 served as Squadron Commander of Submarine Squadron One of the Submarine Group, Pearl Harbor.

Again returning to the Navy Department, he completed a tour of duty in May 1959 as Head, Undersea Warfare Branch of the Undersea Warfare Division, Office of the Chief of Naval Operations. From May 1959 to June 1960 he served as Assistant Deputy Supreme Allied Commander, Atlantic Antisubmarine Warfare Technical Center, La Spezia, Italy, with collateral duty as Assistant Officer in Charge, Mutual Weapons Development Program Contract Supervisory Staff. On May 20, 1960, he was designated Supreme Allied Commander Atlantic Deputy for Antisubmarine Warfare Research Center, and Officer in Charge, Mutual Weapons Development Program Contracts Supervisory Staff, Saclant.