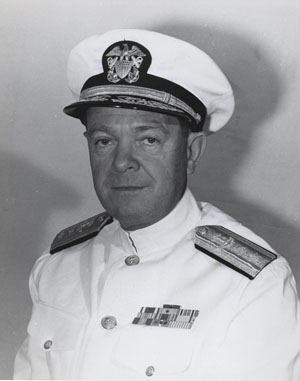 Michael Francis Donald Flaherty was born on 10 December 1904, in North Adams, Massachusetts, son of Michael B. and Margaret McGrath Flaherty. He attended Drury High School in North Adams, prior to his appointment to the US Naval Academy, Annapolis, Maryland, from the First District of his native state in 1924. Graduated with the degree of Bachelor of Science and commissioned Ensign in the US Navy on 28 June 1928, he subsequently advanced in rank attaining that of Rear Admiral to date from 1 August 1956.

Upon graduation from the Naval Academy in June 1928, he remained there for the summer course in aviation, and in September joined the USS Maryland. He served as a junior officer in that battleship, operating with Battleship Division 5, of the Battle Fleet and Battleship Division 4, Battle Force, successively, until March 1932. He then reported to the USS Monocacy, a unit of Mine Division 1, Battle Force, and remained on board for three months, after which he had submarine training at the Submarine Base, New London, Connecticut.

In January 1933 he reported on board the USS Argonaut, attached to Submarine Division 7 of the Submarine Force based at Pearl Harbor, T.H. He was detached in June 1934 to return to the United States for lighter-than-air training at the Naval Air Station, Lakehurst, New Jersey. While there he participated in the National Balloon Races at Denver, Colorado as Aide to Navy Entry 1, in 1936. He was designated Naval Aviator (LTA) on 31 October 1936 and remained on duty at the Lakehurst Station until May 1937.

Following duty in the USS Salt Lake City, a unit of Cruiser Division 4, Scouting Fleet, he reported in January 1941 to the Naval Mine Warfare School, Yorktown, Virginia, for instruction. Three months later he returned to the Naval Air Station, Lakehurst, where he was on duty at the outbreak of World War II in December 1941. In January 1942 he reported to the Naval Air Station, Moffett Field, California, for duty in connection with the commissioning of Airship Patrol Squadron 32. He served as Executive Officer of that squadron, assigned to the Pacific Southern Naval Coastal Frontier, until July 1942.

He next served as Gunnery Officer of the USS Detroit, assigned to patrol duty in the Bering Sea, and in May 1943 put into commission and assumed command of Airship Patrol Squadron 23. Transferring to Airship Patrol Squadron 14 for similar duty, he developed the unit into one of the strongest airship operation groups operating on the East Coast. He was awarded a Letter of Commendation, with authorization to wear the Commendation Ribbon, from the Secretary of the Navy: "For meritorious service as Commander Blimp Squadron Fourteen from July 17, 1943 to April 15, 1944, when the squadron was engaged in warfare against enemy submarines in coastal waters..."

From May 1944 to February 1945 he commanded Fleet Airship Wing Two based at Richmond, Florida, after which he joined the USS Maryland as Executive Officer. Detached from that battleship in November 1945, he had a tour of duty in the Bureau of Ordnance, Navy Department, Washington DC. He remained there until September 1947 and from that time until August 1949 served on the Staff of Commander Training Command, US Pacific Fleet.

Reporting for instruction at the Naval War College, Newport, Rhode Island, he completed the course there in June 1950, and assumed command of the USS Noble. Under his command, that attack transport participated in the landings at Inchon and the evacuation of Hungnam and Sonjin, Korea. He was awarded the Bronze Star Medal with Combat "V," for meritorious service while commanding the Noble. The Noble was one of two APA's awarded the Navy Unit Commendation during the Korean War.

In October 1951 he reported as Head of Department of Seamanship and Navigation at the Naval Academy, where he remained until August 1953. The next month he assumed command of the USS Wisconsin, and in July 1954 became Director of the Recruiting Division, Bureau of Naval Personnel, Navy Department. From September 1955 to October 1956 he was Director of the Officer Distribution Division, Bureau of Naval Personnel, Navy Department, after which he served as Assistant Chief of Naval Personnel for Plans. On 12 August 1957 he became Commander Cruiser Division Six and three months later transferred to command of Cruiser Division Two.

On 2 September 1958 he assumed command of the Middle East Force and in August 1959 was detached from that command for duty as Assistant Chief of Naval Operations (Personnel), Navy Department. On 2 November 1961 he became Commander Cruiser Force, US Atlantic Fleet, with additional duty as Commander Cruiser Division Six. Upon the disestablishment of Cruiser Force, US Atlantic Fleet on 1 April 1962, his additional duty became his primary duty. On 1 July 1962 his title was changed to Commander Cruiser-Destroyer Flotilla Twelve, and in January 1963 he reported as Commander Training Command, Atlantic Fleet. He was awarded the Legion of Merit and Cited as follows:

"For exceptionally meritorious service from January 1963 to September 1966 as Commander Training Command, United States Atlantic Fleet...Rear Admiral Flaherty has maintained a high level of performance in the Training Command during a period of constantly and rapidly changing training requirements generated by new management programs and new and sophisticated ships, weapons and electronic systems. Through his expert appraisal, his calm and practical approach to problems, and his sound judgment and foresight, he has contributed immeasurably to the combat readiness of the Fleet by bringing the training of his personnel to a very high level of effectiveness, thereby ensuring the readiness of the United States Navy to support national policies..."

On 1 October 1966 he was transferred to the Retired List of the US Navy and several days later reported as Governor of the Naval Home, Philadelphia, Pennsylvania. He continued to serve as such until relieved of active duty on 8 October 1969.

He was married to the former Jean Ostrom of Seattle, Washington, and they had two sons (one attended the US Naval Academy, Class of 1954). Rear Admiral Flaherty died in Virginia Beach, Virginia, on 17 December 1993.