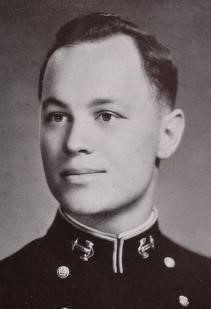 Bernard Brown Forbes, Jr., was born in Savannah, Georgia, on October 29, 1920. He attended Sparks (Maryland) High School and Geneva College, Beaver Falls, Pennsylvania, prior to enlisting in the US Navy on August 15, 1938. He had duty in USS Seattle (CL-11) and USS Yorktown (CV-5), prior to reporting in August 1940 for instruction at the Naval Academy Preparatory School, Norfolk, Virginia. In 1941 he entered the US Naval Academy, Annapolis, Maryland, on appointment by the Secretary of the Navy. Graduated on June 7, 1944, with the Class of 1945 (accelerated course due to World War II), he was commissioned Ensign and subsequently advanced in rank to that of Rear Admiral, to date from November 1, 1971.

Following graduation from the Naval Academy in 1944, he had aviation indoctrination at the Naval Air Station, Jacksonville, Florida, and in August 1944 joined USS Barton (DD-722) as Gunnery Officer. He served in that destroyer throughout the remaining period of World War II and until February 1947, participating in attacks on Luzon; landings at Ormoc Bay, Mindoro and Lingayen Gulf; assault and occupation of Iwo Jima and Okinawa Gunto; Fifth and Third Fleet raids against Honshu and Nansei Shoto and the Third Fleet operations against Japan. He also took part in Operation Crossroads- -first atomic tests at Bikini Atoll. He is entitled to the Ribbon for, and a facsimile of the Navy Unit Commendation awarded the Barton for service at Okinawa from March 21 to June 30, 1945.

In February 1947 he assumed command of USS PC-572 and in October that year was detached for flight training at the Naval Air Station, Pensacola, Florida; the Naval Auxiliary Air Station, Cabaniss Field, Corpus Christi, Texas, and the Naval Air Station, Jacksonville, Florida. Designated Naval Aviator in April 1949, he joined Composite Squadron Thirty-three and from July 1950 to April 1951 had duty as Flag Lieutenant and Aide to Commander Naval Air Force, Atlantic Fleet. He had similar duty on the Staff of Commander Second Fleet and in that assignment participated in two major NATO exercises.

In November 1953 he returned to the Naval Auxiliary Air Station, Cabaniss Field, to serve as an Instructor until March 1955 and the next month became Administrative Assistant to the Flag Lieutenant and Aide to the Commander in Chief, Pacific/Commander in Chief, Pacific Fleet. In September 1957 e reported as Executive Officer of Attack Squadron Fifteen, based on USS Franklin D. Roosevelt (CVA-42) and in that capacity participated again in a Mediterranean Cruise.

From June 1959 until June 1960, he had postgraduate instruction at Stanford University, Stanford, California, from which he received the degree of Master of Arts. Following further instruction (Senior Course) at the Naval War College, Newport, Rhode Island, he joined Attack Squadron Forty-four in July 1961 and in September that year assumed command of Attack Squadron One-Hundred Seventy Six. That squadron, under his command, participated in a Mediterranean cruise, based on USS Shangri-la and won the Battle Efficiency “E”. In December 1962 he reported as Air Officer on board the USS Franklin D. Roosevelt (CVA-42), which won the Flatley Safety Award for the fiscal year 1964 and in June 1964 was detached for duty as Head of the Manpower Program Branch, Office of the Chief of Naval Operations, Navy Department, Washington, D. C. He was awarded the Navy Commendation Medal “for outstanding performance of duty . . . (in) the timely integration of accurate manpower data . . . made an invaluable contribution to the effectiveness of the Navy program planning system . . .”

In August 1966 he assumed command of USS Shasta (AE-6) and was awarded the Bronze Star Medal and a Gold Star in lieu of the Second Navy Commendation Medal. The citations further state in part:

Bronze Star Medal:  “For meritorious achievement . . . from November 3, 1966 to April 16, 1967 during combat operations against the enemy. Captain Forbes contributed materially to the success of the Seventh Fleet combat operations off the coast of Vietnam while conducting 104 underway replenishments and transferring 10,641 tons of ammunition under extremely adverse weather conditions with an outstanding personnel safety record. . .”

During the period August 1967 to June 1969 he was Assistant Director for Distribution Control in the Bureau of Naval Personnel, Navy Department, Washington, D. C. He next assumed command of USS Independence (CVA-62) and was awarded the Legion of Merit. The citation states in part: “. . . The exceptional operation of the ship and her assigned air wings during the North Atlantic Treaty Organization Exercise Peacekeeper and during deployment with the Sixth Fleet were a result of his superb professional competence. . .”

In October 1970 he became Chief of Staff and Aide to Commander Sixth Fleet and in September 1971 was ordered detached for duty as Assistant Chief of Naval Personnel for Officer Personnel Control, Navy Department. Upon the reorganization of the Bureau, effective June 30, 1973 his title was changed to Assistant Chief of Naval Personnel for Officer Development and Distribution. In October of that year he assumed command of Carrier Group Six.