A dormant volcano that rises in northern California. 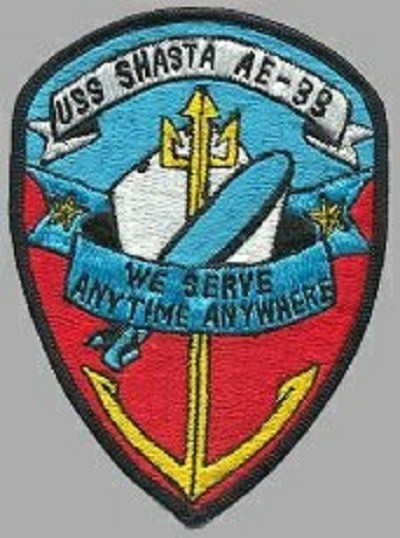 Shasta’s shield bears the motto and symbology of the spirit of her crew and the importance of her mission. The mountain is Mount Shasta, and provides a background for the ordnance symbol which represents the various services that Shasta provided to the fleet. The motto: “We Serve Anytime - Anywhere” represents combat logistic support to the fleet. The two gold stars indicate that Shasta marks the second U.S. Navy/Naval ship to bear the name. The image of the old fashioned, stock anchor represents the nautical tradition that continues in the naval service today.

Mount St. Helens, Wash., erupted at 0832 on 18 May 1980. The massive explosion spewed volcanic ash across a wide area and triggered a destructive debris avalanche. Shasta sailed to Portland, Ore. (9–21 June 1980), and took part in the Portland Rose Festival during ongoing volcanic activity from the mountain. Shasta entered the Columbia River at dawn on 12 June, and embarked 300 guests at Astoria, Ore. The ship then passed through a narrow channel which had been cut through debris deposited by Mount St. Helens, before she moored in downtown Portland. The ongoing volcanism dropped additional ash onto the ship, which required laborious cleaning. Shasta then embarked another 300 guests and came about and steamed downriver on 16 June.

A fire broke out in the crew’s lounge on the evening of Thanksgiving (26 November 1980). The blaze damaged the lounge, the adjacent passageway, and the flight control tower, situated directly above the lounge. Four men required temporarily hospitalization.

Shasta and amphibious transport dock Cleveland (LPD-7) collided during a practice replenishment on 26 September 1984. Both ships escaped without serious damage or casualties.

She encountered bitter winter weather while operating with aircraft carrier Carl Vinson (CVN-70) in the Gulf of Alaska and off the Aleutian Islands (24 January–6 February 1987). During a deployment to the Western Pacific, Indian Ocean, and Persian Gulf (14 July–30 December 1987), Shasta, Comdr. Jeffrey A. Finley in command, took part in Operation Earnest Will—an operation to maintain freedom of navigation within the Persian Gulf, that included renaming and reflagging 11 Kuwaiti tankers. The ship’s embarked Sea Knights, of Helicopter Combat Support Squadron (HC) 11 Detachment 6, rescued four people during the voyage.

Shasta and fast combat support ship Sacramento (AOE-1) collided during a replenishment in the eastern Pacific on the morning of 21 May 1989. Both ships escaped serious damage, and they completed transferring their stores later in the day.

Shasta sailed again in what the ammunition ship’s historian described as the “inhospitable waters” off Alaska while making a great circle voyage across the North Pacific into the Western Pacific (18 September–16 December 1989). A Sea Knight flew an advanced beach detachment to operate from Cold Bay, Alaska. At times, the ship also established airheads at Adak and Amchitka. During the busy day of 3 October, Shasta carried out a vertical replenishment with battleship New Jersey (BB-62), guided missile cruiser Lake Champlain (CG-57), and amphibious assault ship Peleliu (LHA-5).

The deployment impacted the men who had loved ones in the San Francisco-Oakland Bay Area when an earthquake measuring 7.1 on the Richter scale devastated the region, killing 62 people, many on the Oakland Freeway as portions of the structure collapsed, on 17 October. The ship sailed west of the International Date Line and consequently received the news on 18 October. The following day, the historian recorded: “Crew intensely concerned over earthquake news.” Volunteer ombudsmen diligently tracked down families and assured crewmembers by verifying the survival of their families and friends.

During a voyage to the Western Pacific, Indian Ocean, and Persian Gulf (8 December 1990–8 June 1991), she served in the Persian Gulf War I. Lookouts wore foul weather jackets during the unseasonably cold weather, and constantly scanned the water for mines. Guided missile cruiser Leyte Gulf (CG-55), steaming in a position approximately 50 miles northwest of Battle Group Echo (including Shasta), detected an apparent poison gas cloud drifting toward the battle group, at 2245 on 20 January 1991. Shasta sounded general quarters, adding “This is not a drill!” Her historian reported that the “eyes of every crewmember told the story” concerning the harrowing incident as they donned MCU2P gas masks, but Leyte Gulf had mis-identified the cloud and the alert proved to be premature. Sailors went ashore for a few brief hours of liberty equipped with their gas masks during their first night at Mina Salman, Bahrain (25–27 February 1991). The ship had barely sent her liberty party ashore when she manned battle stations again as an apparent Iraqi SS-1 Scud-B (R-17E) tactical ballistic missile hurtled toward the area. The “Scud alert” proved in error, however, and the relieved crewmembers secured from general quarters.

A fire broke out on board Sri Lankan registered merchant ship Mercs Horana in the central Persian Gulf on 29 March 1991. Shasta steamed 20 miles from the area but came about, and one of her Sea Knights provided two triwalls of fire-fighting equipment to frigate Francis Hammond (FF-1067), which -- along with British frigate Brilliant (F.90) -- reached the area before the ammunition ship. The flames quickly spread and engulfed the superstructure, however, by the time Shasta arrived about one hour later. Shasta dispatched four fire-fighting teams comprising 70 sailors by two 33-foot boats, which shuttled people and equipment throughout the night. Four female sailors took part in the two initial fire parties the ship sent to Mercs Horana, and a total of eight American women participated in the multinational effort—the British also (reportedly) employed women firefighters. Combat store ship Niagara Falls (AFS-3) and Spanish frigate Victoria (F.82) reached the area later and took part in battling the blaze. Brilliant principally fought the fire on the merchantman’s starboard side, and Victoria to her port. After these ships fought the conflagration for nearly 24 hours (into mid-morning), Brilliant took Mercs Horana in tow for salvage, to prevent the stricken ship from becoming a hazard to navigation.

Shasta was decommissioned and placed in service with the Military Sealift Command at the Fleet and Industrial Supply Center Oakland on 1 October 1997. 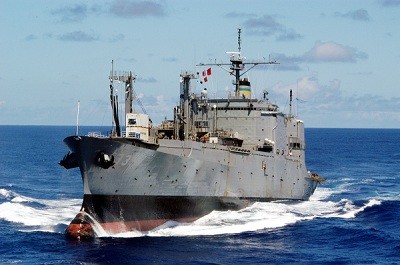 Shasta was placed out of service on 7 April 2011, and transferred to the Reserve Fleet. She was subsequently towed -- pending disposal -- to the Naval Sea Systems Command (NavSea) Inactive Ships On-Site Maintenance Office, at Joint Base Pearl Harbor, Hawaii. In 2013, she was taken under tow to be scrapped at Brownsville, Texas.