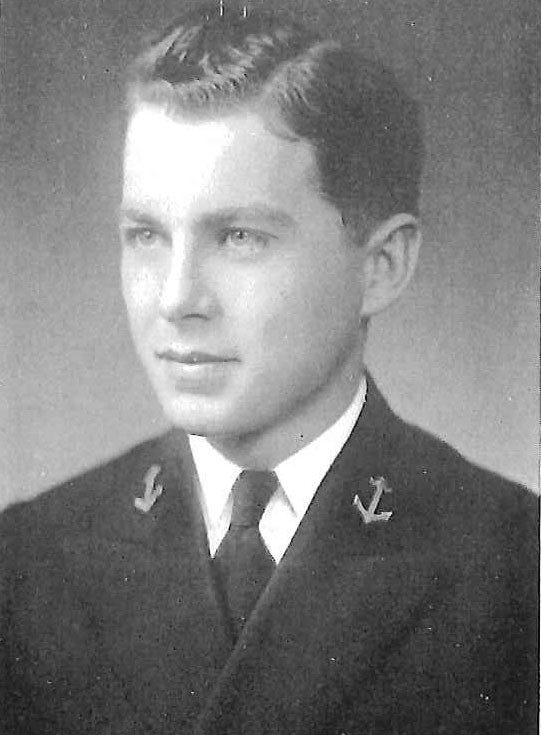 John Joseph Becker was born on May 10, 1913, in Norfolk, Virginia, son of Mrs. Helan Rosendale Becker and the late Charles Adam Becker. He entered the US Naval Academy, Annapolis, Maryland, on appointment from the Ninth Congressional District of Virginia in 1931, and was graduated and commission Ensign in the US Navy on June 6, 1935. His appointment was revoked because of physical disability on June 6, 1937, and on April 27, 1938, he was commissioned Ensign in the Naval Reserve. He advanced to the rank of Commander, USNR, dating from July 20, 1945, and after his transfer to the US Navy on August 2, 1946, was promoted to Captain to date from May 1, 1956.

As a civilian (in inactive status in the Naval Reserve), he was employed an an aeronautical draftsman by the Glenn L. Martin Company of Baltimore, Maryland, after brief employment with Douglas Aircraft Company of Santa Monica, California. Also for one year he was an instructor in Algebra and Physics at the Rutherford Preparatory School, Long Beach, California, and for one year he served as a Merchant Marine Deck Officer. (he holds a Second Mate’s License).

Called to active duty on June 19, 1940, he served in the Bureau of Navigation (later Bureau of Naval Personnel), Navy Department, Washington, DC, prior to and following the outbreak of World War II in December 1941. From May to November 1942 he had instruction in airplane engines at Massachusetts Institute of Technology at Cambridge, and the Army and Navy Engine Training School, Pratt and Whitney Aircraft Division, East Hartford, Connecticut. He was then assigned duty in connection with fitting out USS Princeton, building at the Philadelphia Navy Yard, and was detached in July 1944, participating in numerous operations in the Pacific Combat Area including the Gilberts, Marshalls, Marianas and Hollandia operations.

For three months he was assigned to Commander Fleet Air, Quonset, at the Naval Air Station, Quonset Point, Rhode Island, and commanded the Carrier Aircraft Service Unit of that activity during the last month of his stay there. After brief fitting out duty with USS Randolph, building at the Newport News Shipbuilding and Dry Dock Company, Newport News, Virginia, he joined that aircraft carrier (CV-15) at her commissioning, October 9, 1944, and served on board until June 1945, participating in the Iwo Jima and Okinawa Gunto Operations in the Pacific War Area during that period.

When detached from the Randolph in June 1945, he returned to Annapolis for instruction in General Line at the Naval Postgraduate School, and upon graduation, was ordered detached for fitting out duty in USS Valley Forge (CV-45). He served as Damage Control Officer and First Lieutenant of that carrier from her commissioning on November 3, 1946, until January 1948, and a month later assumed command of USS Shea (DM-30). When detached from that command in July 1949, he returned to the Bureau of Naval Personnel, Navy Department, where he served until January 1952 in the Plans Section, Naval Reserve Division.

From February through July 1952 he was a student at the Armed Forces Staff College, Norfolk, Virginia, and in September of that year he assumed command of USS Furse (DDR-882), which in May 1953 was deployed on occupation duty in European waters. From July 1954 until July 1956 he served as Assistant Chief of Staff for Personnel on the Staff of the Commandant of the Tenth Naval District, and Commander Caribbean Sea Frontier, after which he returned to Washington, DC, for postgraduate instruction in Comptrollership at George Washington University. He was awarded as Master’s degree in Business Administration in June 1957.

During the period July 1957 to November 1959 he served as Inspector/ Comptroller for the Fourth Naval District, and for a year thereafter commanded USS Capricornus (AKA-57). He reported in November 1960 as Chief of Staff and Aide to Commander Amphibious Training Force, Atlantic, and from September 1962, served as Commander Amphibious Squadron TWELVE. He reported in September 1963 to the Office of the Chief of Naval Operations, Navy Department, as Assistant Director of the Programs and Plans Division. In June 1965 he was assigned as Chief of Staff and Aide to the Commandant, Sixth Naval District, with headquarters at the Naval Base, Charleston, South Carolina.