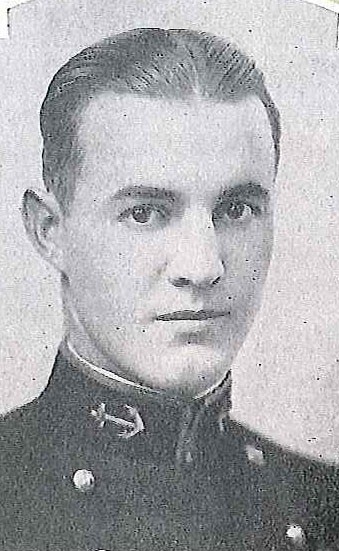 Edward Herman Eckelmeyer, Jr., was born in Philadelphia, Pennsylvania, on June 13, 1905, son of Edward H. and Clara M. (Fath) Eckelmeyer. He attended Northeast High School and Drexel Institute, both in Philadelphia, prior to his appointment to the US Naval Academy as Midshipman from the Sixth District of Pennsylvania in 1923. He was graduated and commissioned Ensign on June 2, 1927, and through subsequent promotions attained the rank of Captain, his date of rank March 20, 1945.

After graduation in June 1927, he remained at the Naval Academy for aviation instruction until August 19 of that year, and a week later reported to USS Arkansas. He served as a junior officer in that battleship until May 13, 1928, when he was transferred to the destroyer Hopkins for ten months' duty. On March 27, 1929 he reported to the Naval Air Station, Pensacola, where after nine months' flight instruction he was designated Naval Aviator. During the period December 30, 1929 until May 18, 1934, he served as Radio and Communication Officer in Patrol Squadron 8-S of Aircraft Squadrons, Scouting Fleet, attached to USS Wright; and at the Fleet Air Base, Coco Solo, Canal Zone, as Gunnery Officer of Patrol Squadron 3-S (later redesignated Patrol Squadron 3-F).

He returned to Annapolis in June 1934 and until May 1936 had instruction in Ordnance Engineering (Aviation) at the Postgraduate School, continuing the course for a year therafter [sic] at the Navy Yard, Washington, DC. In June 1937 he reported to the Navy Yard, Philadelphia, where USS Philadelphia was building and served as Senior Aviator on board that cruiser from her commissioning, September 23, 1937, until June 29, 1939. He next had duty as Flight Officer of Torpedo Squadron 6, based on the carrier Enterprise, and on April 30, 1940, he was detached with orders to the Naval Proving Ground, Dahlgren, Virginia, for a tour of duty as Assistant Officer in Charge of the Naval Air Detail. After his detachment in July 1943, he received a Letter of Commendation from the Chief of Bureau of Aeronautics for his work in development and testing of the self-sealing fuel tanks.

On August 26, 1943 he assumed command of USS Biscayne which participated in operations in the European Theater during a vital part of World War II. For outstanding services while in that command, he was awarded the Legion of Merit with Combat "V," and the Bronze Star Medal, also with Combat "V." The citations follow:

Legion of Merit: "For exceptionally meritorious conduct…as Commanding Officer of USS Biscayne during the amphibious invasion of Salerno, Italy, in September 1943. With distinctive professional skill and extreme courage under fire, Commander Eckelmeyer directed the operations of the Biscayne, Flagship of a major Naval Task Force, which served as ship and guide for landing craft convoys. His vessel also gave close-in gunfire support and acted as antiaircraft defense, tender and repair ship for landing craft. As a result of his untiring energy and conspicuous bravery, the Biscayne functioned at all times in a highly satisfactory and efficient manner despite frequent attacks by enemy aircraft and heavy fire from hostile guns. His inspiring leadership and fearless devotion to duty contributed in large measure to the success of the invasion forces."

Bronze Star Medal: "For distinguishing himself in the performance of meritorious services as Commanding Officer of USS Biscayne prior to and during the amphibious invasion of Southern France in August 1944. Commander Eckelmeyer efficiently organized and administered his ship to adequately fulfill in all respects her mission as the amphibious flagship of a Naval Task Force Commander during the preliminary phases as well as the execution of the assault and maintenance operations. The high state of material readiness, morale and smooth working coordination with the embarked performance under fire and during the accomplishment of many difficult tasks assigned incident to the conduct of these large scale combined operations…"

Detached from command of the Biscayne in September 1944, he reported to Headquarters, Fifth Naval District, Norfolk, Virginia, and on December 13, 1944 was transferred to the Naval Gun Factory, Navy Yard, Washington, D.C., where he remained throughout the last months of the war. In January and February 1946 he commanded USS Tulagi, on "Magic Carpet" duty, and on February 27, 1946 he was transferred to duty as Commanding Officer of USS Albemarle (AV 5), flagship of the Deputy Commander, Joint Task Force ONE. The Albemarle, under his command, operated as Laboratory Ship during the atom bomb tests (Operation CROSSROADS) at Bikini Atoll in the Pacific, in the summer of 1946.

Detached from command of the Albemarle in August 1947, he reported on September 12 that year, to the Armed Forces Special Weapons Project, Washington, DC, as Chief of the Development Division. He served in that capacity in this, the first unified outfit in the Armed Forces after unification of the services, until July 31, 1950. In August he reported as a student at the Naval War College, Newport, Rhode Island, and completing the strategy and Logistics course in June 1951, was assigned that month as Commander Utility Wing, Air Force, Atlantic Fleet, serving as such until April 1952.

On April 20, 1952 he assumed command of USS Cabot (CVL 28) remaining in that command until May 8 of the next year. When detached, he reported to the Navy Department, Washington, DC, for temporary duty in the Office of the Chief of Naval Operations, preparatory to assuming his present post as US Naval Attache and US Naval Attache for Air, Oslo, Norway.