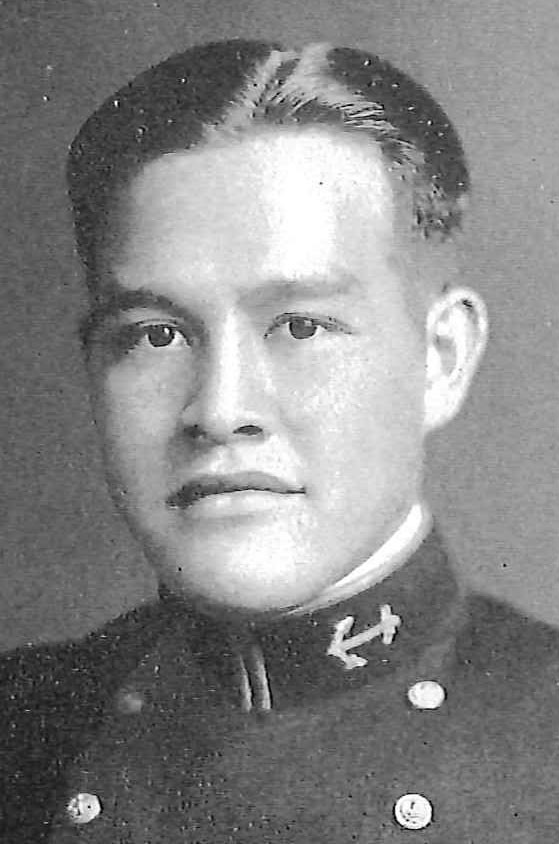 Gordon Paiea Chung-Hoon was born in Honolulu, Territory of Hawaii, on July 25, 1910, son of William Chung-Hoon, Jr., and Agnes Akau (McInerny) Chung-Hoon. He attended Punahou School in Honolulu, and prepared for the Naval Academy at Severn School, of Hawaii, he entered the Naval Academy on June 16, 1930. He was graduated and commissioned Ensign on May 31, 1934, and through subsequent promotions attained the rank of Captain, to date from July 1, 1953.

After graduation in June 1934, he was assigned to USS Indianapolis, and served as a junior in that cruiser, on loan to the state of Pennsylvania, until March 1936. He was then transferred to USS Montgomery, a unit of Mine Division One, Battle Force, based on Pearl Harbor. A year later he was detached to the USS Dent, operating with Destroyer Division 19, Submarine Force, also at Pearl Harbor.

In July 1939 he was ordered to USS Arizona, flagship of Battleship Division One, Battle Force. Attached to that battleship when she was bombed and sunk during the Japanese attack on Pearl Harbor on December 7, 1941, he joined USS Boggs on January 21, 1942, and served as Executive Officer of that destroyer until September of that year.

Reporting in October 1942 to the Seattle-Tacoma Shipbuilding Corporation plant, Tacoma, Washington, he assisted in fitting out USS Carmick, and served as her Executive Officer from her commissioning, December 28, 1942, until July 9, 1943. He commanded her briefly before being detached in August 1943, for duty on the staff of Commander, Fleet Operations Command, Fleet Subordinate Command, at Treasure Island, California.

On May 10, 1944 he assumed command of USS Sigsbee, in which command he remained throughout the latter period of the war. He was awarded the Diver Star Medal for “conspicuous gallantry and intrepidity as Commanding Officer of the USS Sigsbee, in action against enemy Japanese’s forces in the vicinity of Kyushu Island, Japan, from March 17 to April 10, 1945…” The citation continues: “Commanding an important unit of an advanced picket group, Commander Chung-Hoon engaged in offensive operations against enemy aerial forces and assisted in destroying twenty enemy planes. Subsequently attacked by six planes, he directed the Sigsbee in shooting down one dive bomber before it could penetrate the formation…”

The Navy Cross was awarded him “For extraordinary heroism as Commanding Officer of the USS Sigsbee, a unit of an Advanced Picket Group in action against enemy Japanese forces in the vicinity of Okinawa, April 14, 1945…” The citation further states: “Although his ship suffered major damage when struck by an enemy plane and all power was lost, Commander Chung-Hoon coolly carried out defensive maneuvers and directed his antiaircraft batteries in delivering prolonged and effective fire against the continued heavying enemy air attack…(Later he) supervised damage control procedure (to return his ships) to port under its own restored power..”

Detached from command of the Sigsbee in October 1945, he joined the staff of Commander Service Force, Pacific Fleet, and served in that capacity until transferred in August 1947, to Headquarters, Fourteenth Naval District, Pearl Harbor, for duty on the staff of the Commandant as Director of Distribution for Naval Reserve; later as Director of Naval Reserve and then as Director of Civilian Personnel. On August 15, 1950, he assumed command of USS John W. Thomason (DD 760), and after twenty months in that command, reported in April 1952 as Commanding Officer of the Fleet Training Center, US Naval Base, Pearl Harbor.

On February 23, 1954, he was ordered to the Naval War College, Newport, RI where he was student from July of that year until June of the next, then served on the staff. Under orders of February 20, 1956, he commanded USS Norton Sound (AVM-1) for a year, and on June 18, 1957 was ordered to the Office of the Chief of Naval Operations, Navy Department, Washington, DC. There he served as Ship Command Member, Staff, Ship Characteristics Board, and now is Project Officer, Amphibious Types and Auxiliaries, Fleet Development and Maintenance Division.