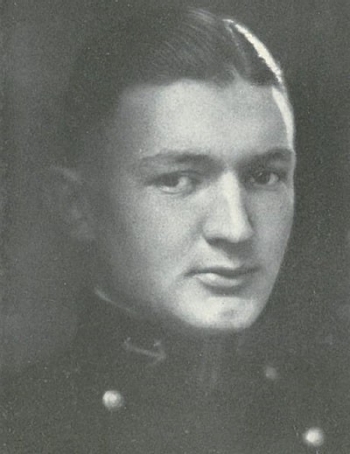 Donald Cord Varian was born on 7 March 1901, in Hagerstown, Maryland. He attended Mount St. Joseph’s College, in Maryland, and the Army-Navy Preparatory School in Baltimore, before his appointment by Senator J. C. W. Beckman of Kentucky, to the US Naval Academy, Annapolis, Maryland, in 1921. As a Midshipman he participated in Class football and boxing. Graduated and commissioned Ensign on 4 June 1925, he subsequently attained the rank of Captain to date from 20 July 1943. His selection for the rank of Rear Admiral was approved by the President on 24 July 1953, his date of rank, 1 October 1953.

After graduation from the Naval Academy in 1925, he served in USS Nevada, flagship of Battleship Division 2, Battle Fleet, until June 1927, and following brief instruction at the Naval Air Station, Pensacola, Florida, he joined USS Williamson, operating with Destroyer Division FORTY TWO, Scouting Fleet. In February 1928 he transferred to USS Tracy, a unit of Destroyer Division 38, Battle Fleet, and served aboard until detached in November of the same year. During the next six months he served as Aviation Gunnery Officer, of USS Mississippi.

In May 1929 he returned to the Naval Air Station, Pensacola, Florida, for further flight training, and on 21 December 1929 was designated Naval Aviator. He remained at Pensacola until January 1930, and from that time until April 1931 was assigned to Observation Squadron FOUR-B, Aircraft Squadrons, Battle Fleet, attached to USS Mississippi. Transferring to Observation Squadron THREE-B of USS Arizona, operating with Carrier Division TWO, US Fleet, he continued duty with that squadron until September 1937. He then joined Patrol Squadron FIVE-S, of the Fleet Air Base, Coco Soso, Canal Zone.

Between February and June 1932 he had brief duty aboard USS Henderson. He then reported for instruction in the Hydrographic Office, Bureau of Navigation, Navy Department, Washington, DC. In June 1934 he was ordered to USS Mindanao, flagship of Commander South China Patrol, Asiatic Fleet, and when detached in March 1935, he continued duty on Asiatic Station, with an assignment at the Navy Yard, Cavite, Philippine Islands, and later serving in USS Black Hawk, tender for Destroyer Squadron FIVE, Asiatic Fleet.

From October 1936 to June 1937 he was aboard USS Paul Jones, as Executive Officer, and thereafter until May 1939 served as an instructor in the Department of Marine Engineering at the Naval Academy. Following sea duty as Executive Officer of USS Warrington, he returned to the United States in July 1940, to fit out and command USS Conway. He remained in command of that destroyer until she was transferred, after her commissioning on 9 August 1940, to Great Britain, under Lease-Lend agreement, later that year.

He again had fitting out duty, this time in USS Stringham during November and December 1940, and upon her commissioning on 11 December 1940, assumed command. Transferred to command of USS Lansdale in April 1942, shortly after the United States entered World War II, he commanded that destroyer until relieved for duty with the Amphibious Command, Amphibious Force, Atlantic Fleet, Headquarters at the Naval Operating Base, Norfolk, Virginia.

He had a short period of instruction with Service Squadron NINE, Key West, Florida, in April 1943, before reporting to the New York Navy Yard, Brooklyn, New York, to assist in fitting out USS Luce. Upon her commissioning on 21 June 1943, he assumed command. In November 1943 he became Commander, Destroyer Division ONE HUNDRED AND EIGHT, and “For exceptionally meritorious service…” in this assignment, was awarded the Legion of Merit with Combat “V”. The citation further states:

“An aggressive leader, (he) directed the training of a new division of destroyers and brought them to the peak of operational efficiency for action against the enemy. Serving as a Unit and Screen Commander during the raids on Palau and Truk in March, he effectively coordinated his division in screening and escorting major units through hazardous waters despite the imminent threat of hostile aerial attack. During the Marianas Islands campaign, in which Saipan, Tinian and Guam fell to our forces, (he) exercised distinctive ability in leading the ships of his command in providing positive screening protection to the invasion forces by sinking a Japanese submarine and repelling repeated air attacks…”

During June and July 1946, he had temporary duty in the Twelfth Naval District, San Francisco, California, after which he reported as Assistant Chief of Staff and Operations Officer to the Commander, SEVENTH Fleet. He had further staff duty between January and August 1947, with US Naval Forces, Western Pacific. He was assigned in October 1947 to the Bureau of Naval Personnel, Navy Department, Washington, DC, and served there until December 1950 as Director of Officer Distribution.

From January to November 1951 he served as Commanding Officer of USS Salem (CA 139), operating with the Atlantic Fleet, and in November 1951 he became Chief of Staff to Commander Cruiser Destroyer Forces, US Pacific Fleet. He had instruction at the Naval War College, Newport, Rhode Island, from September 1953 until January 1954 when he became, Commander Destroyer Flotilla TWO. On 12 September 1955 he reported as Commander Amphibious Training Command, U S Atlantic Fleet. On 22 December 1956, he reported as Director of the Office of Personnel Policy, Office of the Assistant Secretary of Defense (Manpower, Personnel & Reserve), Washington, DC. He was Commander Mine Force, US Atlantic Fleet from October 1958 to December 1960, when he was assigned as President of the Naval Board of Inspection and Survey, Navy Department. On 1 August 1961 he was transferred to the Retired List of the US Navy.