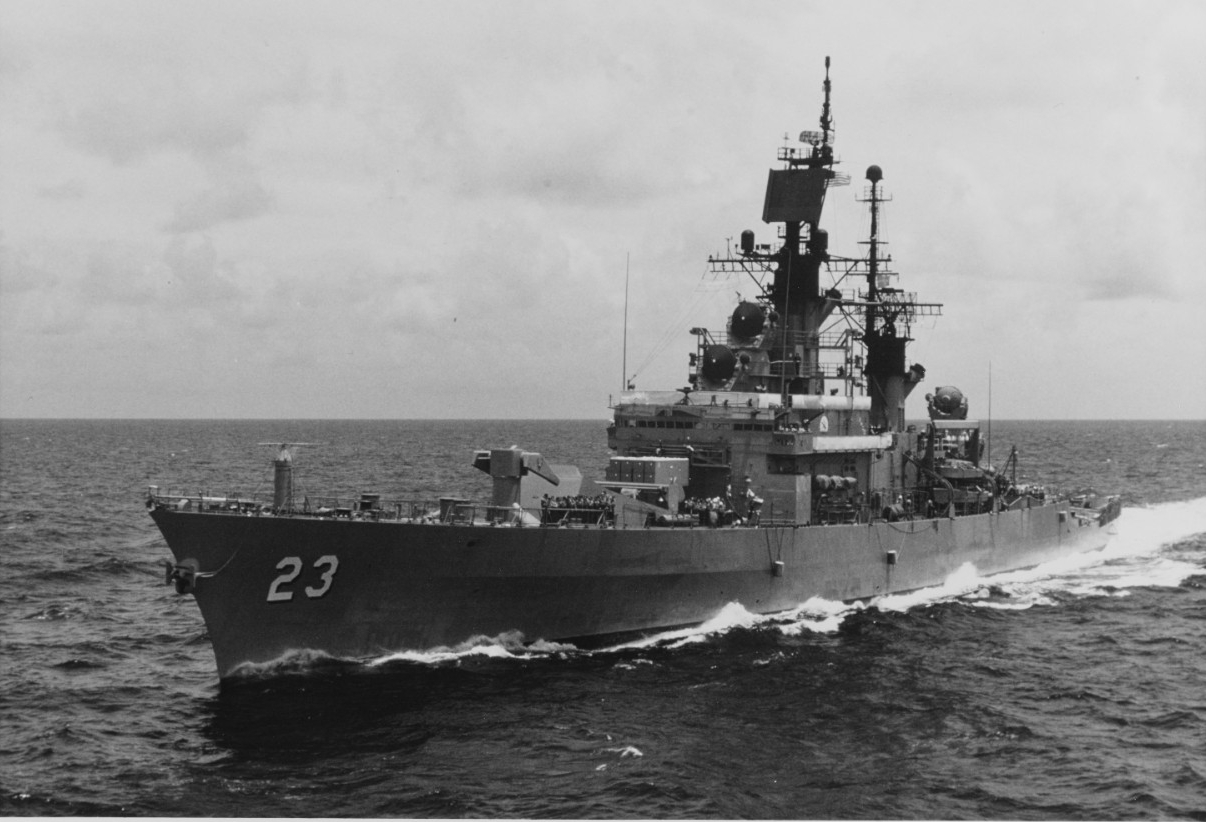 William Frederick Halsey, Jr., born Elizabeth, N.J., 30 October 1882. He was appointed to the U.S. Naval Academy by President William McKinley in 1900 and graduated as a member of the class of 1904. After 2 years at sea, he was commissioned Ensign 2 February 1906. As a junior officer, the future Fleet Admiral served in battleships and destroyers, assuming his first command, Dupont in 1909. His valor and distinction during World War I earned him the Navy Cross.

During World War II Admiral Halsey became one of our most famous leaders as Commander of the legendary 3d Fleet. He exhibited a keen tactical mind that was brilliant and creative. He was the living example of his famous motto, "Hit hard, hit fast, hit often." Before the Pacific war was 2 month old, Admiral Halsey, flying his flag in Enterprise, gained the Presidential Unit Citation for his flagship and the Distinguished Service Medal for himself for his "audacious attack against the Marshall and Gilbert Islands on 31 January 1942."

The 3d Fleet was the greatest seapower force ever assembled and enabled a tactical change from the "hit and run" methods of the early stages of the Pacific war to direct confrontation and assaults. Admiral Halsey, with his flag in New Jersey and later Missouri forced the Japanese fleet back into their inner defenses; and then destroyed the major air and sea installations in the Japanese home islands. He thus prevented any major ensuing offensive and hastened the cessation of hostilities in the Pacific theatre.

Fleet Admiral Halsey died 16 August 1959 at Fishers Island Country Club off the Connecticut shore, and was buried with full military honors at Arlington National Cemetery 20 August 1959. His name will long be revered by Americans who will proudly remember him as one of the greats.

Halsey departed San Francisco on 25 November 1963 for Dabob Bay and Carr Island to conduct ASW system alignment tests and acoustical noise surveys until 7 December. She arrived at her home port of San Diego on 11 December 1963.

Halsey was assigned to Destroyer Squadron 7, Destroyer Division 71 on 13 December, and participated in a special sea power demonstration for the Secretary of the Navy, acting as screen commander from 15-18 December. She conducted her weapons qualification trials from 15 January 1964 to 14 February, and fired her first missiles on the Pacific Missile Range on 10 February 1964.

After a shakedown cruise from 16 March to 1 May, she returned to the San Francisco Naval Shipyard on 15 May 1964; and concluded her post-shakedown on 17 July 1964.

During her first years of active service, Halsey experimented with a unique system of internal organization combining all the aspects of the weapons systems and CIC under a combat officer; and separate hull and communications administration departments.

In 1966 Halsey was assigned to Destroyer Squadron 7, Destroyer Division 71, in the Pacific Fleet. On 2 July she left San Diego for Subic Bay, Philippines. By August she was conducting air-sea rescue and ASW operations in the South China Sea. During this period Halsey rescued some 16 airmen in two cruises in the Gulf of Tonkin. On 5 December the frigate departed Yokasuka, Japan, for the West Coast, arriving San Diego 21 December.

The first quarter of 1967 was spent in training cruises off the West Coast. On ]0 April Halsey left San Diego for an overhaul period at San Francisco Bay Naval Shipyard that continued into August. By September Halsey was again involved in further exercises testing her vital capabilities.