Chauncey I (Destroyer No. 3)

Isaac Chauncey -- born in Black Rock, Conn. -- on 20 February 1772, entered the merchant marine as a young man and was later appointed a Lieutenant in the Navy from 17 September 1798. He fought with gallantry in the West Indies during the Quasi-War with France, 1799–1801. He went to the Mediterranean in 1802 and participated in the naval operations against the Barbary states. He commanded the frigate John Adams (1804–1805), the brig-rigged sloop-of-war Hornet (1805–1806), Promoted to the rank of Captain on 24 April 1806, he was furloughed to take command of the merchant ship Beaver on a voyage to China, and there again demonstrated his bravery in the face of a British warship's efforts to examine his crew for possible impressment.

In 1807, after returning to the United States and resuming his naval service, Capt. Chauncey took command of the Navy Yard at Brooklyn, N.Y. After war began with Great Britain in mid-1812, Chauncey was ordered, on 12 September 1812, from New York City to Sackett’s (Sackets) Harbor, N.Y., near the Thousand Islands at the east end of Lake Ontario, to gain control of Lakes Ontario, Erie, Huron, and others, if necessary. Chauncey was designated Commander, Naval Forces on the Upper Lakes. As opposition, the British had a few small, armed merchant ships based at York [Toronto], Upper Canada [Ontario]. Chauncey subsequently engaged in an extensive program, building and buying vessels in order to improve the American position on the lake. On 8 November 1812, Chauncey, now Commodore, with the brigantine Oneida, armed with sixteen 24-pounders, and six armed schooners, got underway from Sackett’s Harbor. Finding the 22-gun British vessel, HMS Royal George, out at False Duck Islands on Lake Ontario, Chauncey chased her into Kingston Harbor, Upper Canada. At 3:00 p.m., he ran into the harbor to inspect the fort's defenses. Two of his schooners were chasing merchantmen but the remaining four, each carrying a long 32-pounder, went in ahead of Oneida and kept up a brisk fire on the batteries while Oneida ranged beside Royal George. In 20 minutes, the British cut their rope cables and ran their ship ashore where troops could more easily defend her. Finding the shore batteries too heavy and the wind rising against his course out of the harbor, Chauncey retreated. Royal George was damaged and the schooner Simeo was sunk. Thereafter, four schooners sufficed to blockade Kingston Harbor until ice relieved them of the task.

Chauncey, in February 1813, petitioned the Navy Department to order Oliver Hazard Perry to Erie to command the Erie Squadron. Two months later, in April 1813, Chauncey, believing that his fleet was strong enough to co-operate offensively with the Army under General Winfield Scott, conducted an amphibious operation that captured York in May. He later engaged in a series of inconclusive actions against a British fleet, commanded by Sir James L. Yeo, on Lake Ontario (7–11 August 1813). Just over a month later, the two fleets fought another inconclusive, long-range engagement on Lake Ontario on 11 September 1813. The following spring, Yeo had Chauncey’s fleet blockaded at Sackett’s Harbor. Chauncey was able to turn the tables on Yeo in July 1814, blockading his force at York.

After hostilities ended early in 1815, Chauncey was placed in charge of the Portsmouth Navy Yard, at Kittery, Maine. He returned to the Mediterranean and commanded the Mediterranean Squadron (1816–1818) in the ship-of-the-line Washington. During his command of the squadron, Chauncey assisted in negotiation of a treaty with the Bey of Algiers. Returning to the United States, he later served on the Board of Navy Commissioners (1821–1824) and followed that with another tour as Commandant of the New York Navy Yard. During this tenure, in May 1829, Chauncey led a series of searches for the body of George Washington Adams, who committed suicide by jumping from the deck of the steamship Benjamin Franklin. He returned to the Board of Navy Commissioners in 1833 and became its President in 1837. Commodore Isaac Chauncey died in Washington, D.C., on 27 January 1840. He was interred at the Congressional Cemetery in Washington, D.C. 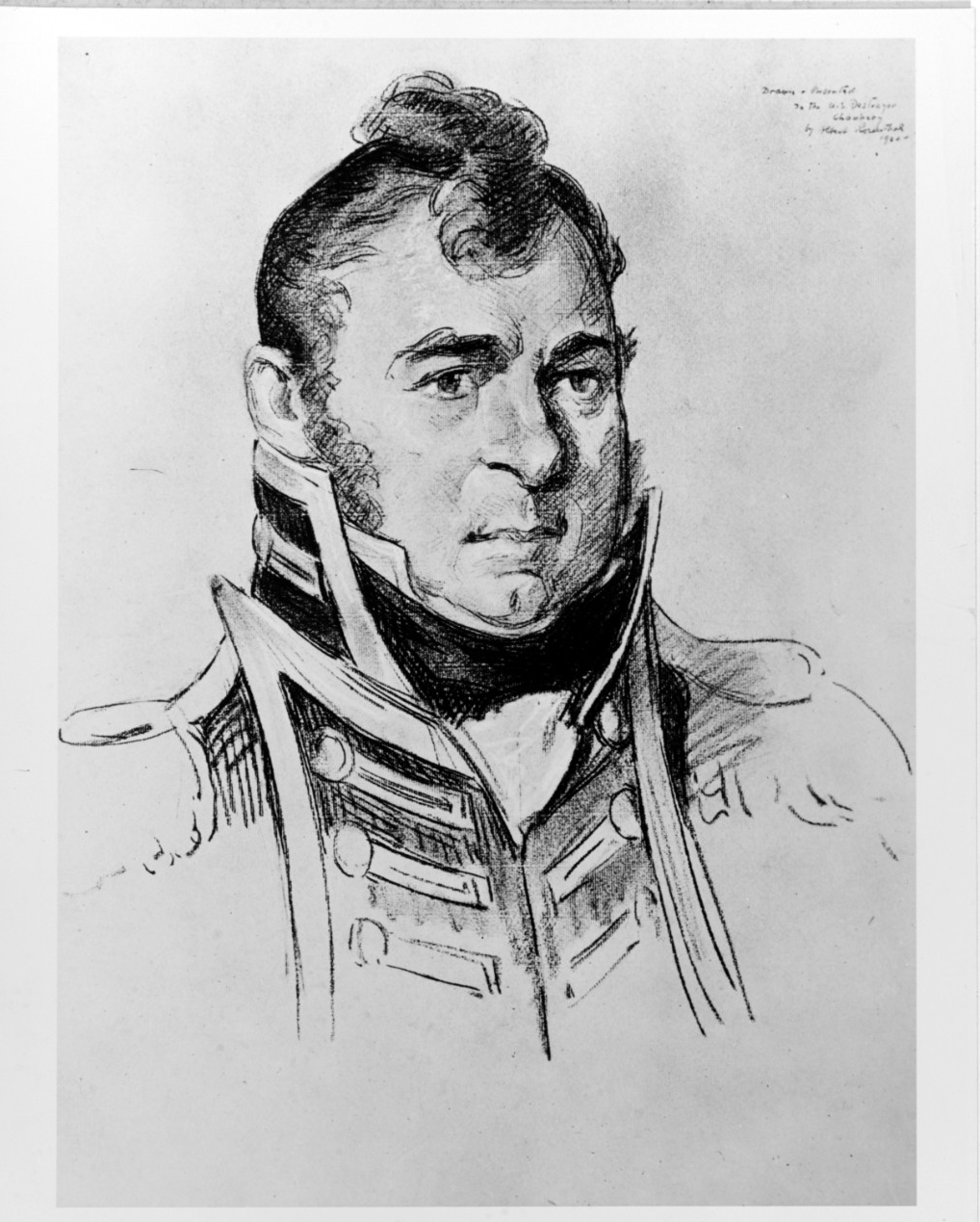 The first Chauncey (Destroyer No. 3) was laid down on 2 December 1899 at Philadelphia, Pa., by Neafie and Levy Ship and Engine Building Co.; launched on 26 October 1901; sponsored by Mrs. Mae Chauncey Stanton Todd, great grand-daughter of Commodore Isaac Chauncey; placed in reduced commission on 20 November 1902; placed in reserve on 2 December 1902; placed in full commission at Norfolk, Va., on 21 February 1903, Lt. Stanford E. Moses in command.

After her commissioning, Chauncey cruised in the Chesapeake Bay in the first half of the year until attached to the Coast Squadron, North Atlantic Fleet (1 June–20 September 1903). She then received orders assigning her to the Torpedo Flotilla, Asiatic Fleet on 20 September 1903. She spent the ensuing months preparing for distant service. 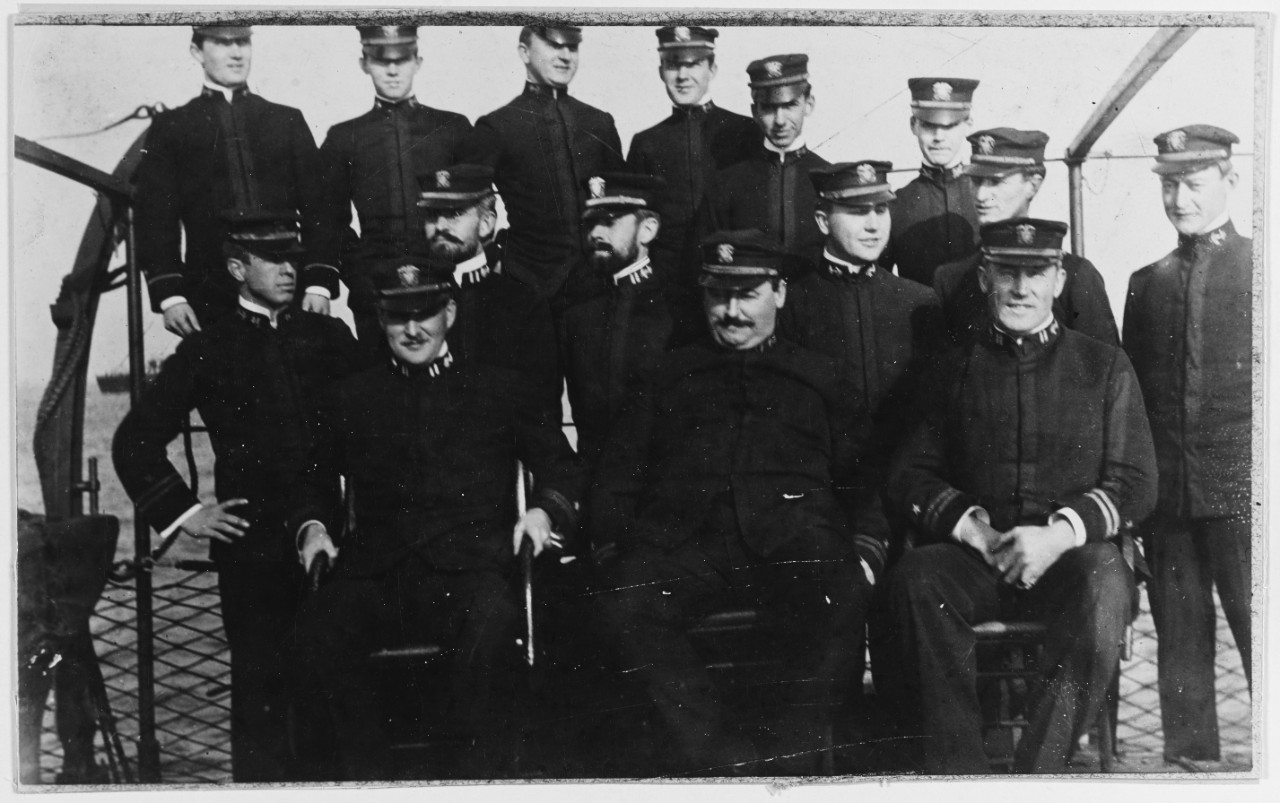 Caption: First Torpedo Flotilla group photograph of most of the flotilla's officers, on board Chauncey. Taken at the Norfolk Navy Yard, Va., in late 1903, shortly before the flotilla left for its voyage to the Philippines. (Naval History and Heritage Command Photograph NH 54148)

Chauncey, in company with the other destroyers of the flotilla, Decatur (Destroyer No. 5), Dale (Destroyer No. 4), Barry (Destroyer No. 2), and Bainbridge (Destroyer No. 1), departed Key West, Fla., on 18 December 1903, bound for San Juan, Puerto Rico, and thence to Gibraltar. While enroute Chauncey ran out of coal off Ferro, Canary Islands, necessitating a refueling at sea. The coal was carried in boats from the auxiliary cruiser Buffalo, which escorted the flotilla on its cruise.

After sailing by way of the Suez Canal, she arrived at Cavite, Philippine Islands (P.I.) in April 1904. The ship was later placed in reserve at Cavite on 5 December 1905. She was then placed back into full commission on 12 January 1907 at Cavite, Lt. Frank R. McCrary in command. In April 1907, the Navy combined the Pacific and Asiatic fleets and Chauncey was a unit of the First Flotilla Division, Philippine Squadron, U.S. Pacific Fleet, until the Asiatic Fleet was reestablished in September 1910. Chauncey was again placed in reserve commission on 22 December 1910 at Cavite and then placed back into commission at Wuhu, China, on 13 April 1912, Lt. (j.g.) Frank J. Fletcher in command. The destroyer’s typical operational employment saw her cruise Philippine waters during the winters and those off China during the summers. With the outbreak of World War I in Europe in August 1914, Chauncey cruised under orders in the southern islands of the Philippines, and remained in the archipelago through 1915. During that time she laid out torpedo ranges, patrolled the entrance to Manila Bay, and was on reconnaissance duty when not engaged in target practices and training in tactical maneuvers. 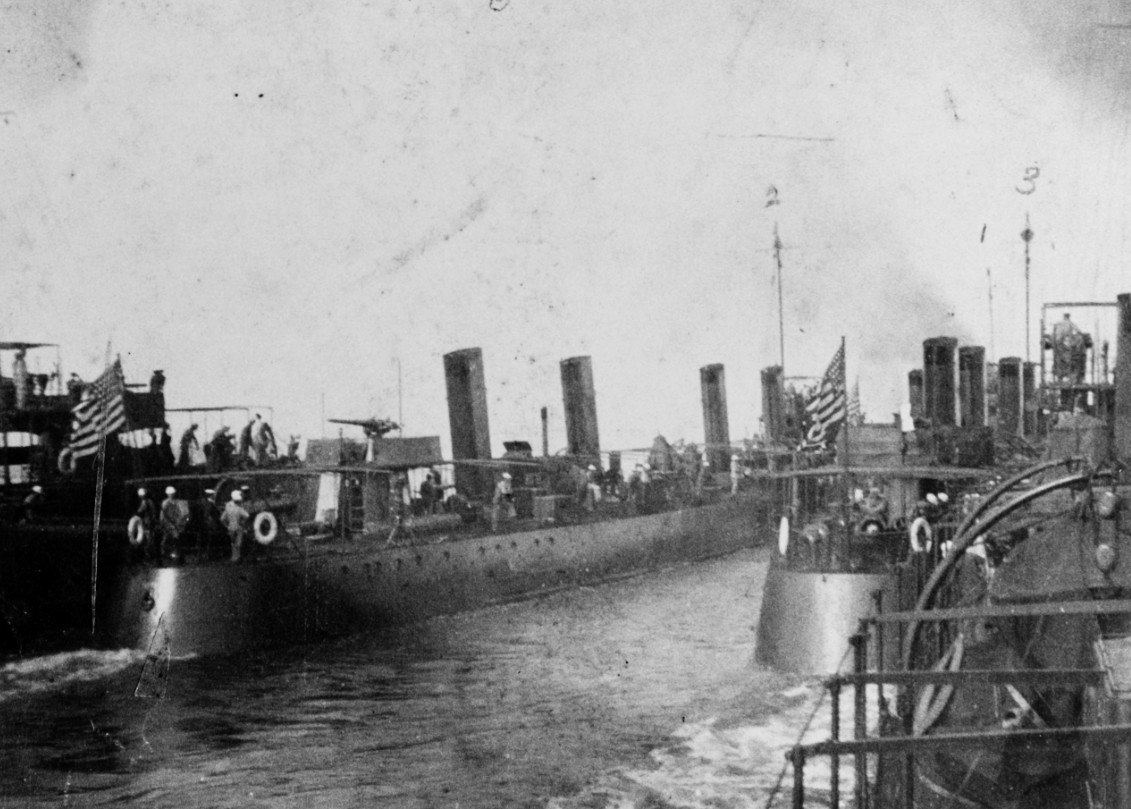 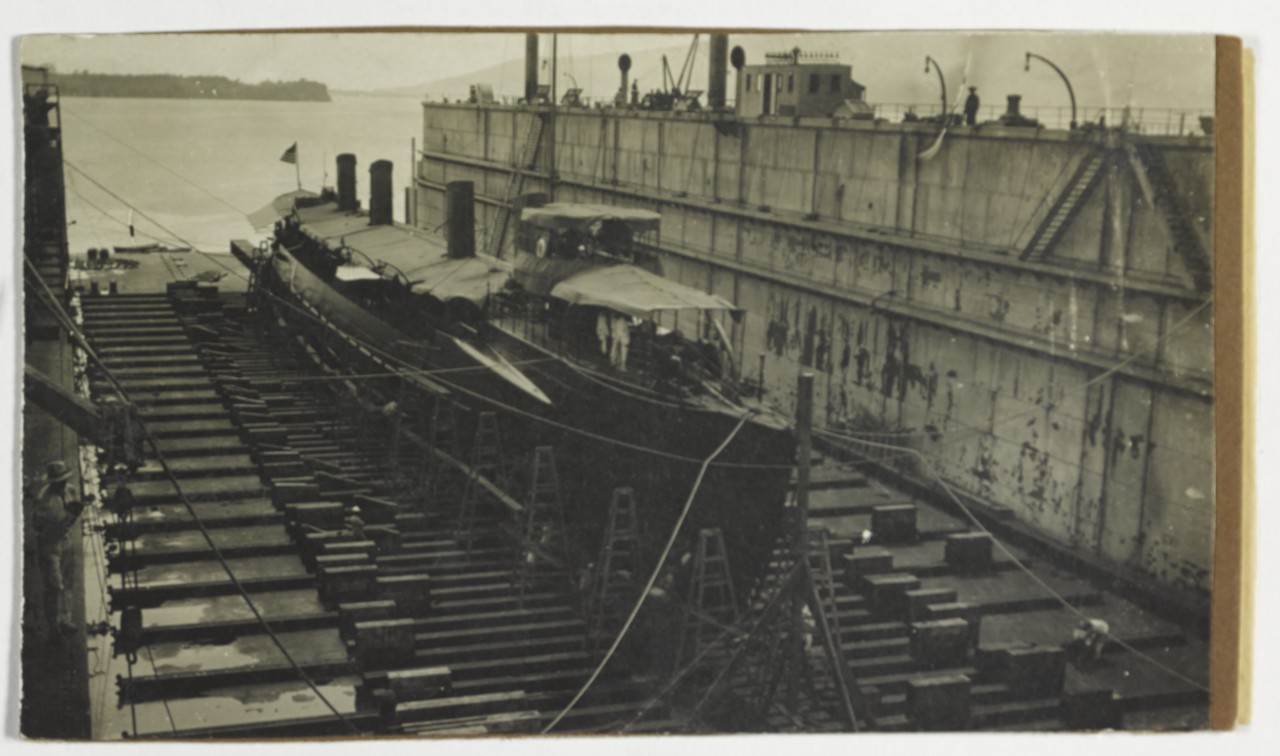 With the outbreak of World War I in Europe in August 1914, Chauncey cruised under orders in the southern islands of the Philippines, and remained in the archipelago through 1915. During that time she laid out torpedo ranges, patrolled the entrance to Manila Bay, and was on reconnaissance duty when not engaged in target practices and training in tactical maneuvers. 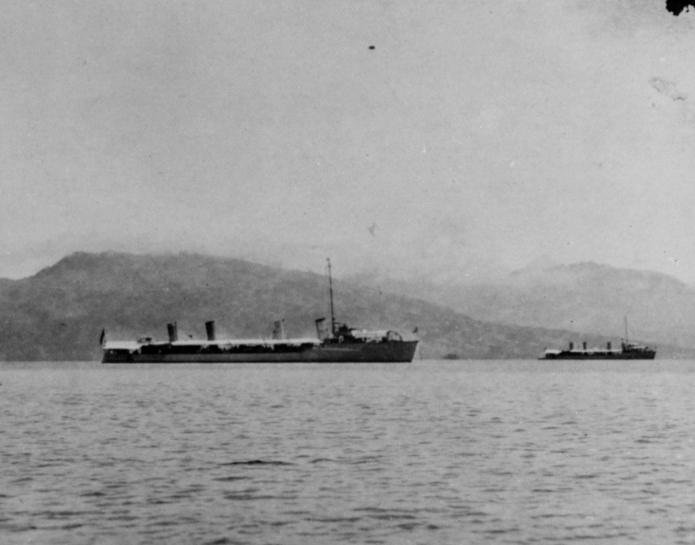 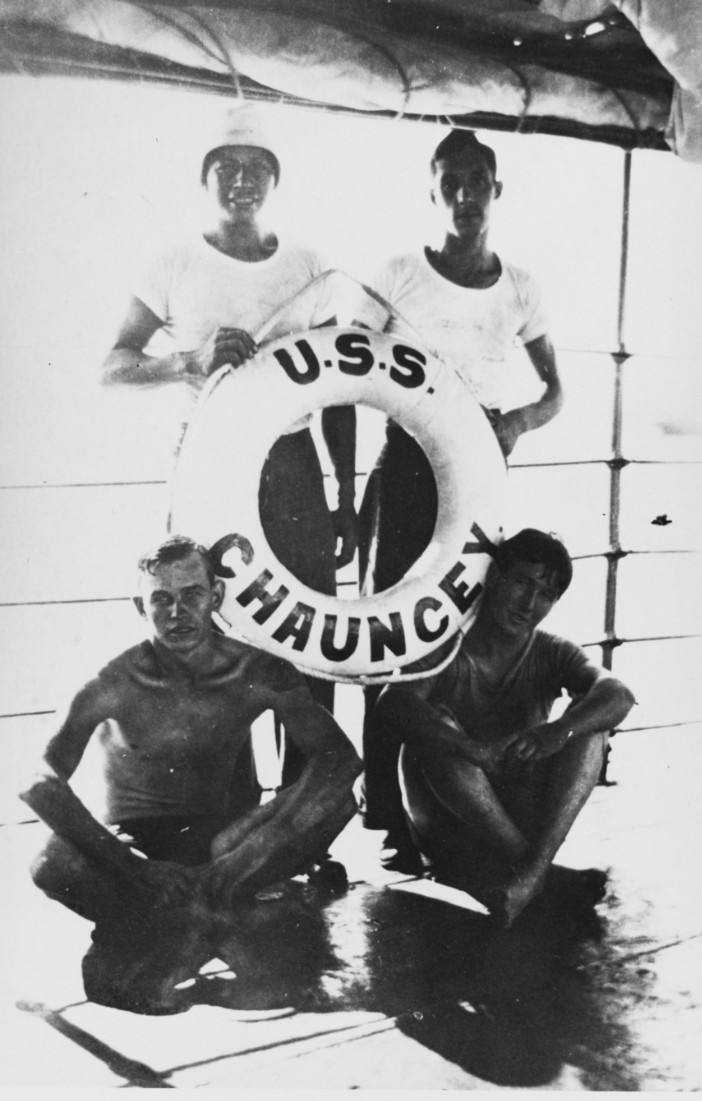 With the U.S. declaration of war against Germany on 6 April 1917, Chauncey was at sea conducting patrol duties at the entrance to Manila Bay, while assigned to the First Destroyer Division, Torpedo Flotilla, Asiatic Fleet. She continued in this duty until 31 July.

Chauncey sailed from Cavite in company Dale, Bainbridge, Barry, and Decatur on 1 August 1917. Bound for Gibraltar via Borneo, Singapore (where they fell in with Caesar and the former- German merchantman, turned Asiatic Torpedo Flotilla flagship, Camilla Rickmers [later Ticonderoga (Id. No. 1958)], Ceylon [Sri Lanka], Aden, the Suez Canal, and Malta. Camilla Rickmers’ speed slowed the destroyers’ transit to the Atlantic. While en route on 30 September, Lt. Walter E. Reno, the ship’s commanding officer, drafted a memorandum stating that, “…I have to report that this vessel is in all respects ready for active war service.” On 6 October, she took on 12,000 gallons of water from Camilla Rickmers at Malta and then escorted her to Naples, Italy, where they arrived on 10 October. The destroyer arrived at Gibraltar on 20 October. Vice Adm. William S. Sims, Commander, U.S. Naval Forces Operating in European Waters, extended a commendation to the destroyer force on their successful passage from Cavite to Gibraltar on 23 October.

Chauncey was assigned to convoy and patrol duty. On 19 November 1917, while on escort duty about 110 miles west of Gibraltar, Chauncey was rammed on her port side, abaft the No. 4 funnel, by the British merchantman Rose as she steamed a zigzag a course in war-imposed darkness at 1:20 a.m. on 20 November. The destroyer could not broadcast a distress signal as her antenna was destroyed by the collision. At 3:17 a.m., Chauncey sank in 1,500 fathoms, taking to their death 21 men including her captain. Seventy survivors were picked up by Rose, and carried to port at Gibraltar, where they arrived later that same day. 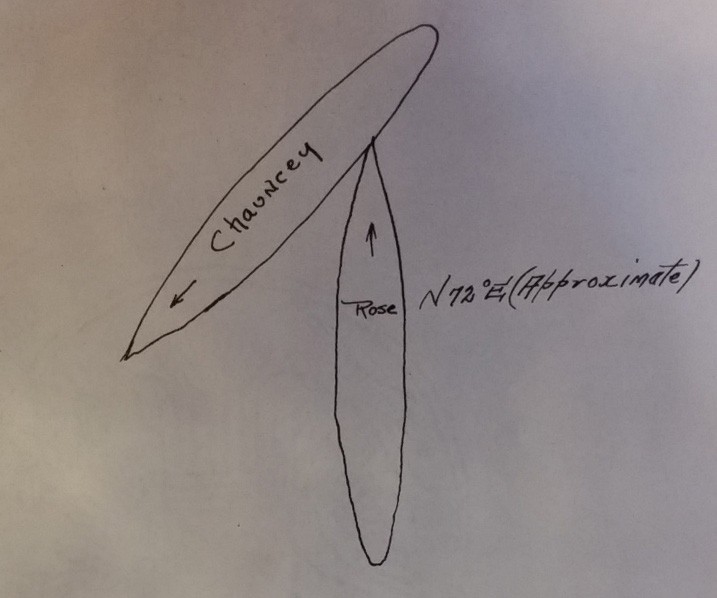 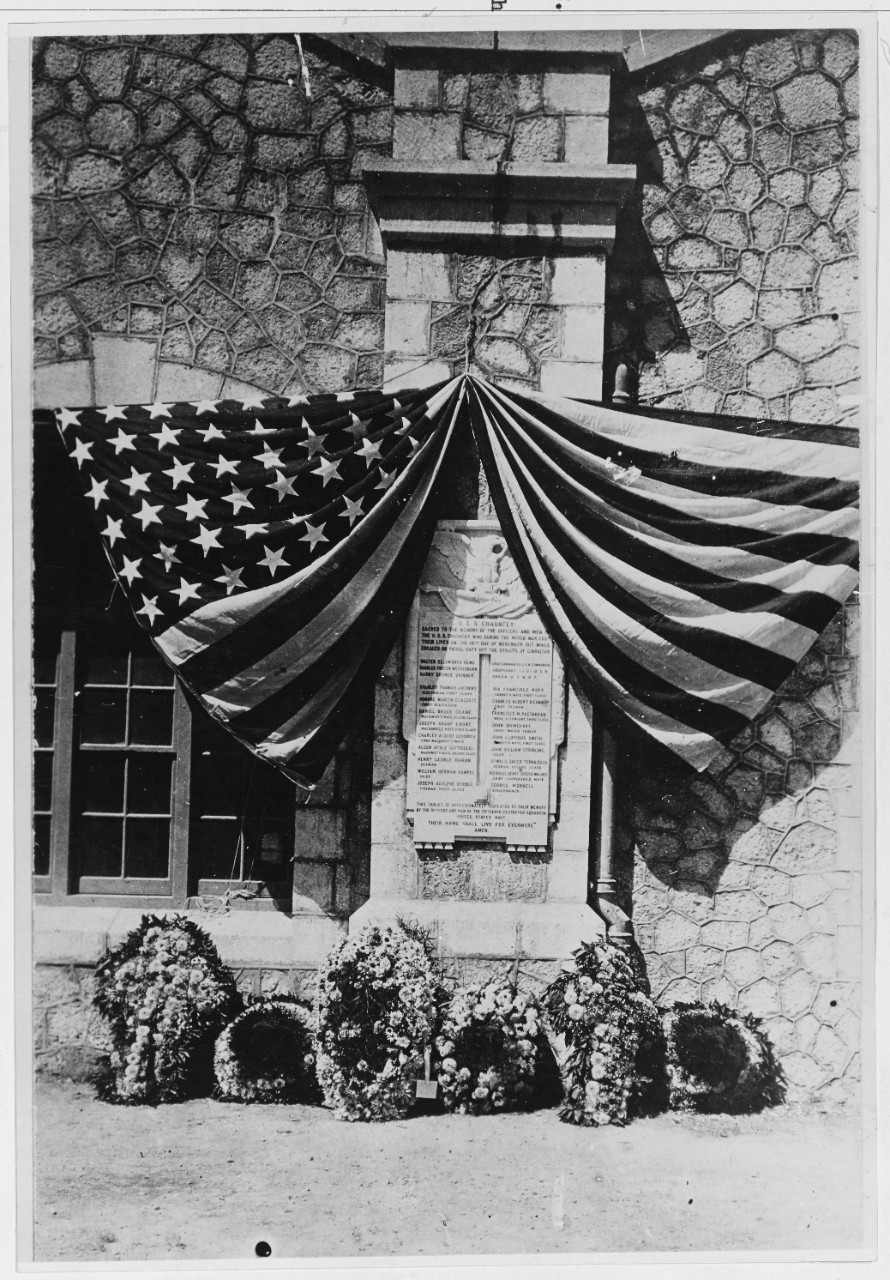 Caption: Memorial tablet erected by the officers and men of Destroyer Squadron Fifteen in memory of the three officers and eighteen enlisted crewmen lost with Chauncey on 20 November 1917. Photographed during the dedication ceremonies after World War I. (Naval History and Heritage Command Photograph NH 42002)

Chauncey was stricken from the Navy list on 17 December 1917.