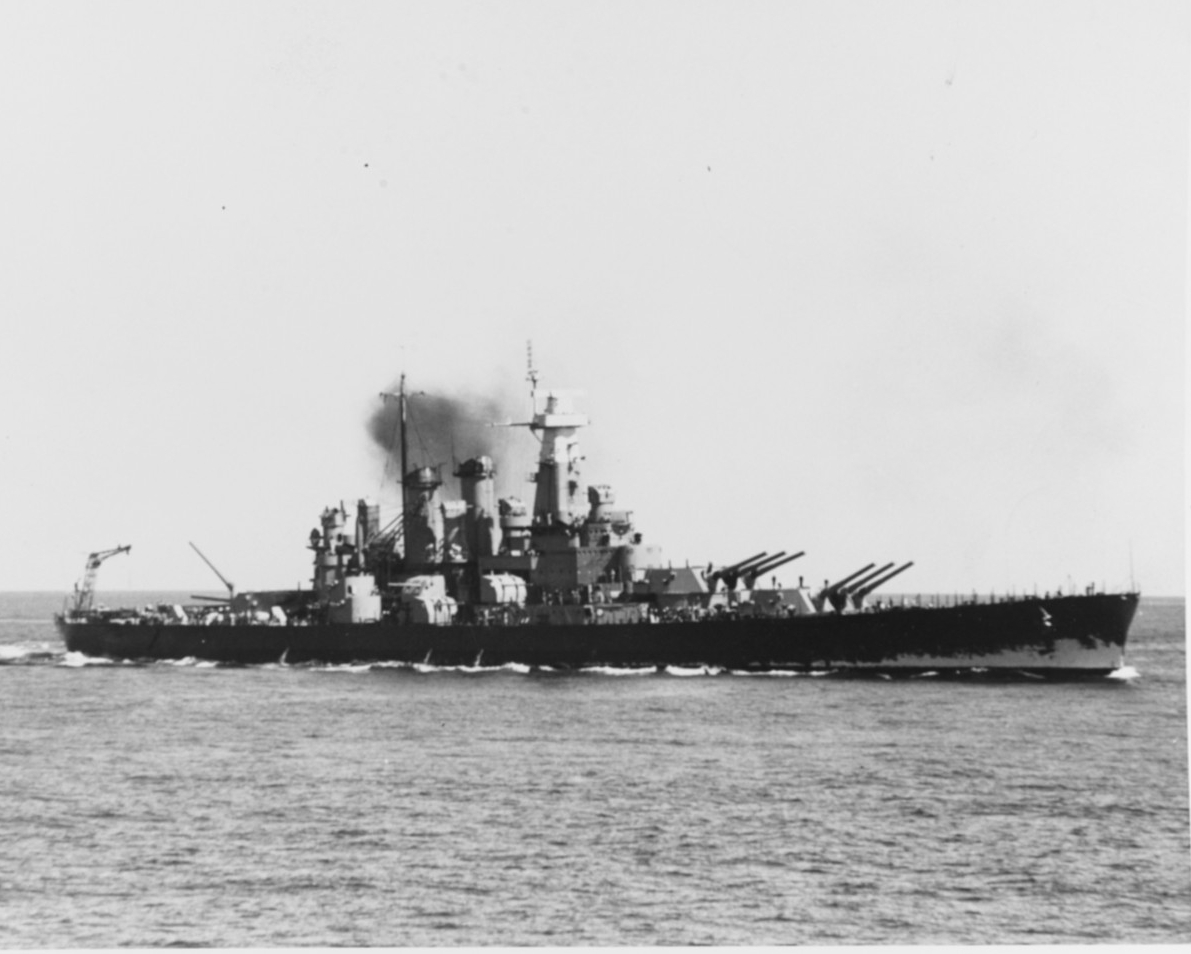 North Carolina (BB-55) at sea during her shakedown cruise, circa April-May 1941. Note what appears to be false-bow-wave camouflage forward, possibly the result of wave action on her new paint. Courtesy of the Naval Historical Foundation, Maher Collection. U.S. Naval History and Heritage Command photograph. Catalog#: NH 83074

One of the original 13 states.

The third North Carolina (BB-55) was laid down on 27 October 1937 at Brooklyn, N.,Y., by the New York Navy Yard; launched on 13 June 1940; sponsored by Miss Isabel Hoey, daughter of the Governor of North Carolina; and commissioned at her building yard on 9 April 1941, Capt. Olaf M. Hustvedt in command.

First commissioned of the Navy's modern battleships, North Carolina received so much attention during her fitting out and trials that she won the enduring nickname "Showboat." North Carolina completed her shakedown in the Caribbean prior to the Pearl Harbor attack, and after intensive war exercises, entered the Pacific on 10 June 1942.

North Carolina and the Navy began the long island-hopping campaign for victory over the Japanese by landing Marines on Guadalcanal and Tulagi 7 August 1942. After screening Enterprise (CV-6) in the Air Support Force for the invasion, North Carolina guarded the carrier during operations protecting supply and communication lines southeast of the Solomons. Enemy carriers were located 24 August, and the Battle of the Eastern Solomons erupted. The Americans struck first, sinking carrier Ryujo; Japanese retaliation came as bombers and torpedo planes, covered by fighters, roared in on Enterprise and North Carolina. In an 8-minute action, North Carolina shot down between 7 and 14 enemy aircraft, her gunners standing to their guns despite the jarring detonation of 7 near-misses. One man was killed by a strafer, but the ship was undamaged. The protection North Carolina could offer Enterprise was limited as the speedy carrier drew ahead of her. Enterprise took three direct hits while her aircraft severely damaged sea-plane carrier Chitose and hit other Japanese ships. Since the Japanese lost about 100 aircraft in this action, the United States won control of the air and averted a threatened Japanese reinforcement of Guadalcanal.

North Carolina now gave her mighty strength to protect Saratoga (CV-3). Twice during the following weeks of support to Marines ashore on Guadalcanal, North Carolina was attacked by Japanese submarines. On 6 September, she maneuvered successfully, dodging a torpedo which passed 300 yards off the port beam. Nine days later, sailing with Hornet (CV-8), North Carolina took a torpedo portside, 20 feet below her waterline, and 5 of her men were killed. But skillful damage control by her crew and the excellence of her construction prevented disaster; a 5.5 degree list was righted in as many minutes, and she maintained her station in a formation at 25 knots.

After repairs at Pearl Harbor, North Carolina screened Enterprise and Saratoga and covered supply and troop movements in the Solomons for much of the next year. She was at Pearl Harbor in March and April 1943 to receive advanced fire control and radar gear, and again in September, to prepare for the Gilbert Islands operation.

With Enterprise, in the Northern Covering Group, North Carolina sortied from Pearl Harbor 10 November for the assault on Makin, Tarawa, and Abemama. Air strikes began 19 November, and for 10 days mighty air blows were struck to aid Marines ashore engaged in some of the bloodiest fighting of the Pacific War. Supporting the Gilberts campaign and preparing the assault on the Marshalls, North Carolina's highly accurate big guns bombarded Nauru 8 December, destroying air facilities, beach defense revetments, and radio installations. Later that month, she protected Bunker Hill (CV-17) in strikes against shipping and airfields at Kavieng, New Ireland and in January 1944 joined Fast Carrier Striking Force 58, Rear Admiral Marc A. Mitscher in command, at Funafuti, Ellice Islands.

During the assault and capture of the Marshall Islands, North Carolina illustrated the classic battleship functions of World War II. She screened carriers from air attack in preinvasion strikes as well as during close air support of troops ashore, beginning with the initial strikes on Kwajalein 29 January. She fired on targets at Namur and Roi, where she sank a cargo ship in the lagoon. The battlewagon then protected carriers in the massive air strike on Truk, the Japanese fleet base in the Carolines, where 39 large ships were left sunk, burning, or uselessly beached, and 211 planes were destroyed, another 104 severely damaged. Next she fought off an air attack against the flattops near the Marianas 21 February, splashing an enemy plane, and the next day again guarded the carriers in air strikes on Saipan, Tinian, and Guam. During much of this period she was flagship for Rear Admiral (later Vice Admiral) Willis A. Lee, Jr., Commander Battleships Pacific.

With Majuro as her base, North Carolina joined in the attacks on Palau and Woleai 31 March-1 April, shooting down another enemy plane during the approach phase. On Woleai, 150 enemy aircraft were destroyed along with ground installations. Support for the capture of the Hollandia area of New Guinea followed (13-24 April), then another major raid on Truk (29-30 April), during which North Carolina splashed yet another enemy aircraft. At Truk, North Carolina's planes were catapulted to rescue an American aviator downed off the reef. After one plane had turned over on landing and the other, having rescued all the airmen, had been unable to take off with so much weight, Tang (SS-306) saved all involved. The next day North Carolina destroyed coast defense guns, antiaircraft batteries, and airfields at Ponape. The battleship then sailed to repair her rudder at Pearl Harbor.

Returning to Majuro, North Carolina sortied with the Enterprise group 6 June for the Marianas. During the assault on Saipan, North Carolina not only gave her usual protection to the carriers, but starred in bombardments on the west coast of Saipan covering minesweeping operations, and blasted the harbor at Tanapag, sinking several small craft and destroying enemy ammunition, fuel, and supply dumps. At dusk on invasion day, 15 June, the battleship downed one of the only two Japanese aircraft able to penetrate the combat air patrol.

On 18 June, North Carolina cleared the islands with the carriers to confront the Japanese 1st Mobile Fleet, tracked by submarines and aircraft for the previous four days. Next day began the Battle of the Philippine Sea, and she took station in the battle line that fanned out from the carriers. American aircraft succeeded in downing most of the Japanese raiders before they reached the American ships, and North Carolina shot down two of the few which got through.

On that day and the next American air and submarine attacks, with the fierce antiaircraft fire of such ships as North Carolina, virtually ended any future threat from Japanese naval aviation: three carriers were sunk, two tankers damaged so badly they were scuttled, and all but 35 of the 430 planes with which the Japanese had begun the battle were destroyed. The loss of trained aviators was irreparable, as was the loss of skilled aviation maintenance men in the carriers. Not one American ship was lost, and only a handful of American planes failed to return to their carriers.

After supporting air operations in the Marianas for another two weeks, North Carolina sailed for overhaul at Puget Sound Navy Yard. She rejoined the carriers off Ulithi 7 November as a furious typhoon struck the group. The ships fought through the storm, and carried out air strikes against western Leyte, Luzon, and the Visayas to support the struggle for Leyte. During similar strikes later in the month, North Carolina fought off her first kamikaze attack.

As the pace of operations in the Philippines intensified, North Carolina guarded carriers while their planes kept the Japanese aircraft on Luzon airfields from interferring with the invasion convoys which assaulted Mindoro, 15 December. Three days later the task force again sailed through a violent typhoon, which capsized several destroyers. With Ulithi now her base, North Carolina screened wide-ranging carrier strikes on Formosa, the coast of Indo-China and China, and the Ryukyus in January, and similarly supported strikes on Honshu the next month. Hundreds of enemy aircraft were destroyed which might otherwise have resisted the assault on Iwo Jima, where North Carolina bombarded and provided call fire for the assaulting Marines through 22 February.

Strikes on targets in the Japanese home islands laid the ground-work for the Okinawa assault, in which North Carolina played her dual role of bombardment and carrier screening. Here, on 6 April, she downed three kamikazes, but took a 5-inch hit from a friendly ship during the melee of antiaircraft fire. Three men were killed and 44 wounded. Next day came the last desperate sortie of the Japanese Fleet, as Yamato, the largest battleship in the world, came south with her attendants. Yamato, a cruiser, and a destroyer were sunk, three other destroyers damaged so badly that they were scuttled, and the remaining four destroyers returned to the fleet base at Sasebo badly damaged. On the same day North Carolina splashed an enemy plane, and she shot down two more 17 April.

After overhaul at Pearl Harbor, North Carolina rejoined the carriers for a month of air strikes and naval bombardment on the Japanese home islands. Along with guarding the carriers, North Carolina fired on major industrial plants near Tokyo, and her scout plane pilots performed a daring rescue of a downed carrier pilot under heavy fire in Tokyo Bay.

North Carolina sent both Sailors and members of her Marine Detachment ashore for preliminary occupation duty in Japan immediately at the close of the war, and patrolled off the coast until anchoring in Tokyo Bay 5 September to reembark her men. Carrying passengers from Okinawa, North Carolina sailed for home reaching the Panama Canal 8 October. She anchored at Boston 17 October, and after overhaul at New York exercised in New England waters and carried Naval Academy midshipmen for a summer training cruise in the Caribbean.

After inactivation, she was decommissioned at New York on 27 June 1947. Struck from the Navy List on 1 June 1960, North Carolina was transferred to the people of North Carolina 6 September 1961. On 29 April 1962 she was dedicted at Wilmington, N.C., as a memoral to North Carolinans of all services killed in World War II. Here splendidly maintained and most appropriately displayed, including a spectacular "sound and light" presentation, "Showboat" still serves mightily to strengthen and inspire the nation. 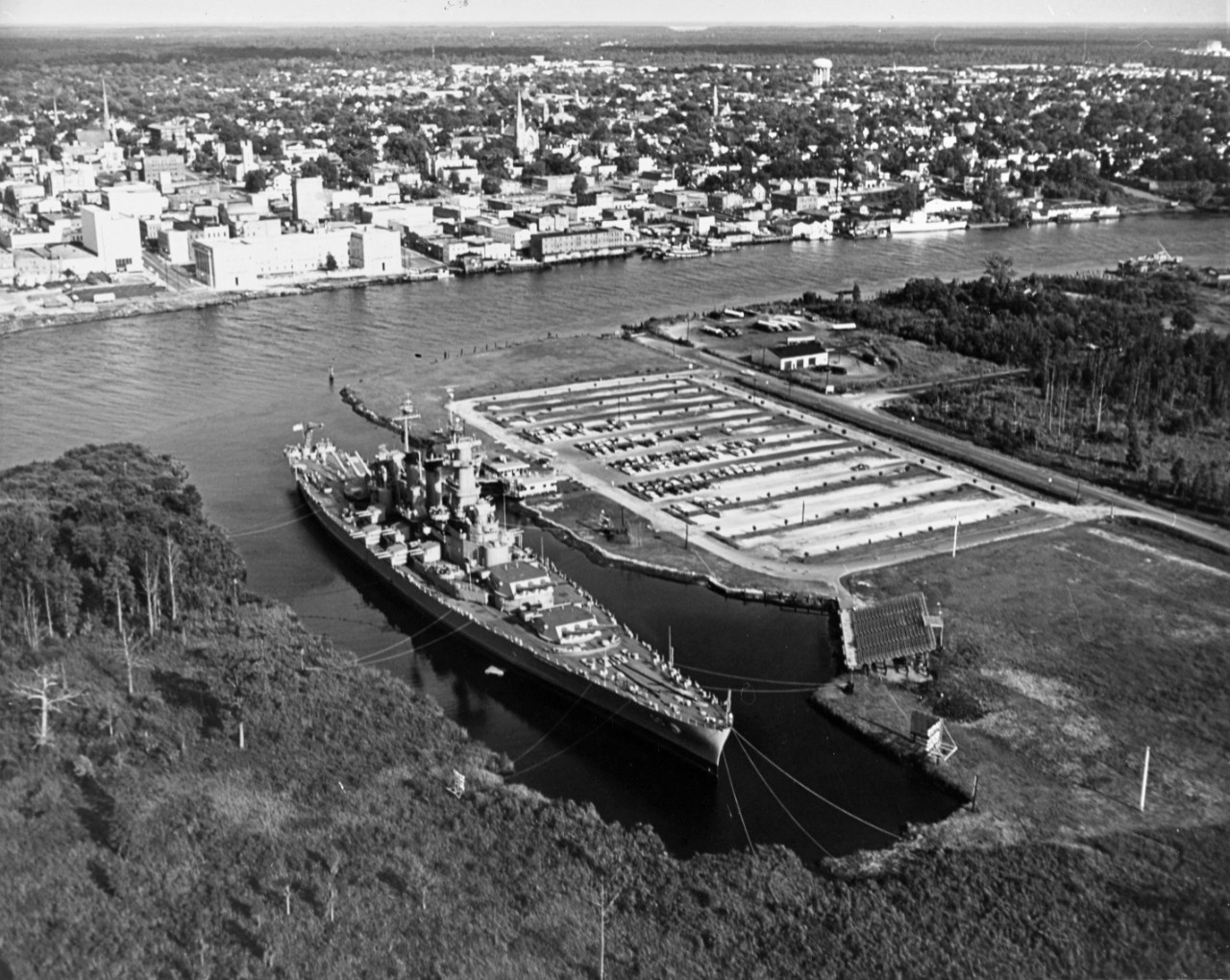