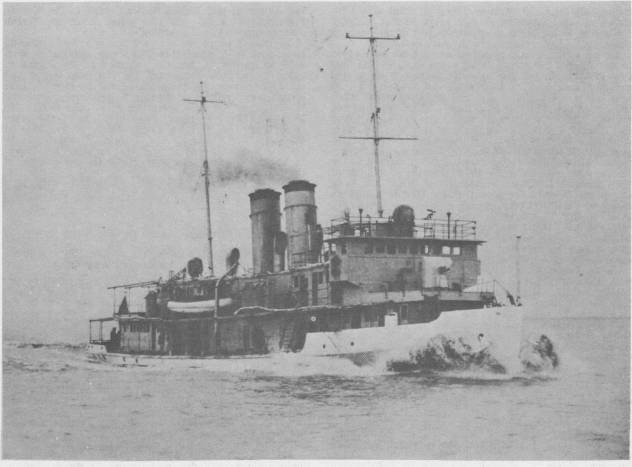 One of six new river gunboats built to replace old gunboats on the Yangtze for a year, Guam was then assigned to the South China patrol. She was reclassifled PR-3 there on 15 June 1928; and, after a year, she returned to duty along the Yangtze. The China through which Guam sailed was racked by war from the day she commissioned-first, civil war as Communists battled Nationalists for control of the ancient nation; and then, total war as Japanese forces sought to win and control China and her vast resources. In such conditions, Guam several times proved her worth.

On Independence Day 4 July 1930, Guam sailed for Yochow and Chenglin to insure the safety of American missionaries and other foreigners in those two cities, then in Communist hands. As she neared Yochow, Guam was met by a hail of rifle fire from the shore. She returned the fire with her machine gun and three inch guns, making five runs past the city in all. One member of Guam's crew was killed in the clash. Guam also evacuated American civilians from Wuhu to Hankow in December 1937 in front of approaching Japanese forces, and a year later served as station ship at Standard Vacuum Oil installations in Hankow to protect American lives and property while Chinese and Japanese armies clashed nearby.

As more and more of China fell into Japanese hands, Guam remained perilously on Yangtze patrol. By 1939 she was "escorted" by a Japanese warship wherever she went, and from her decks could be seen Japanese troop movements. Guam and her sister gunboats, remaining doggedly on station and conducting daily "Repel-Boarders" drills, were a reassuring sight for American civilians.

In January 1941 she was renamed Wake, as her former name was to be used for a new battle cruiser building in the States. On 25 November 1941 she was ordered to close the Navy installation at Hankow, distribute the 80-tons of supplies among American civilians remaining there, and sail to Shanghai. When Wake reached the China coast 30 November with her inevitable Japanese escort, she was stripped and her crew divided between Luzon and Oahu, two larger gunboats which then sailed for Manila. A skeleton crew of 10 reservists, under a Shanghai commercial pilot, remained on board to serve as a radio outlet for the handful of Marines and the Consular force left there. When the Japanese attack on Pearl Harbor sent America into the Pacific war a week later, Shanghai immediately fell to the enemy. After her reservist crew failed in their attempts to scuttle her, Wake was surrendered to the overwhelming Japanese force, the only U.S. ship to do so in the entire war.