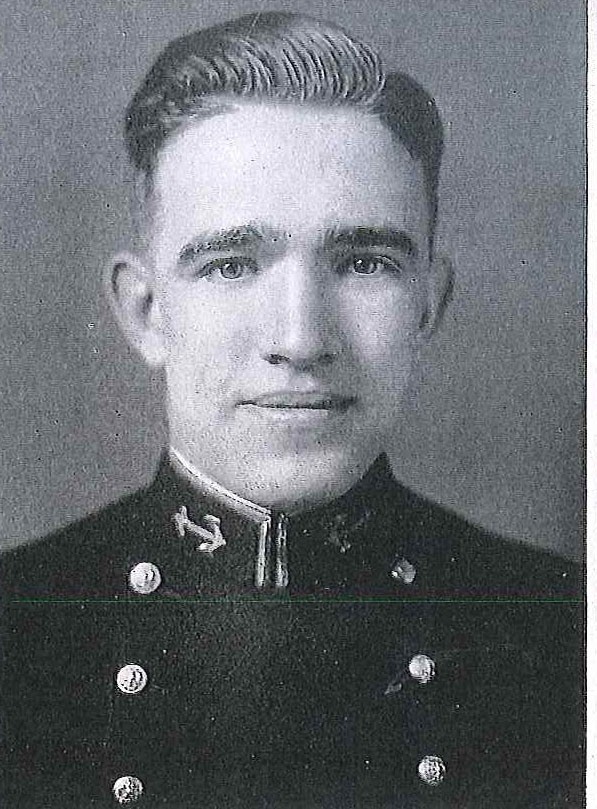 Charles Robert Eisenbach was born in Trenton, New Jersey, on September 16, 1914, son of Charles F. and Anna M. (Remmele) Eisenbach. He attended public schools in Trenton and entered the US Naval Academy, Annapolis, Maryland, from New Jersey on June 9, 1932. As a Midshipman he played baseball, soccer, basketball, and was a member of the "N" Club. Graduated and commissioned Ensign on June 4, 1936, he progressed, through subsequent promotions to the rank of Captain to date from October 1, 1954.

After graduation from the Naval Academy in June 1936, he served aboard USS Richmond until March 1940. During that period the Richmond operated as a unit of Cruiser Division 2, Battle Force, and later as Flagship of Commander Submarine Force, US  Fleet. He reported on April 14, 1940 to the Naval Air Station, Pensacola, Florida, to begin flight training and designated Naval Aviator in November of the same year was detached on January 17, 1941, with orders to Patrol Squadron 12. He served briefly as a pilot of that squadron located at North Island, California, before going to Manila, Philippine Islands, to join Patrol Squadron 101, of Patrol Wing 10. As a pilot of that Squadron, he participated in the defense of Manila at the outbreak of World War II, and has the Ribbon for, and a facsimile of the Presidential Unit Citation awarded Patrol Squadron 101 for heroism in action.

On December 13, 1941 his squadron departed in PBY flight to Balikpapan, Borneo, thence to Surabaya, Java. Patrol Wing 10 operated from Ambon Island, Netherlands East Indies, on reconnaissance duty covering Molucca Straits, and from the seaplane tenders Childs, William B. Preston and Heron. After the invasion of Java by Japanese forces, Patrol Wing 10 operated from Perth and advanced bases on the west coast of Australia.

In March 1943 he became Executive Officer of Headquarters Squadron 8, based at Alameda, California.  He was later assigned duty as Communications Officer and Training Officer on the staff of Commander Fleet Air Wing 8, and in July 1944 was transferred to Fleet Air Wing 10, based at Perth, Australia, and moved to Manus, Admiralty Islands, in August of that year, In October, onboard USS San Carlos he participated in the invasion of Leyte, conducting patrol plane operations from Leyte Gulf, and later moving ashore to operate with PB4Ys and PV type aircraft.

He was awarded the Legion of Merit with Combat "V," for "Exceptionally meritorious conduct…as Executive Officer and Operations Officer of Fleet Air Wing TEN during operations against enemy Japanese forces prior to and during the landings on Leyte…" The citation continues in part: "…(He) supervised and planned search and attack missions which were conducted twenty-four hours a day for three and one-half months at great distances from our bases and, by his efficient organization and operation of the subordinate units of the Wing, contributes immeasurably to the security of our Naval and amphibious forces and to the destruction of the enemy forces…"

The Air Medal was awarded "For meritorious achievement in aerial flight during operations against enemy Japanese forces in the Southwestern Pacific War Area from December 18, 1944 to March 31, 1945. Participating in numerous combat missions over enemy controlled territory, in the vicinity of Japanese operational airfields, (he) contributed to the success of these missions…"

He was designated Task Unit Commander in April 1945, and moving to Palawan, Philippine Islands, engaged in reconnaissance and strikes against the enemy in Borneo and Indo China. "For meritorious service as Commanding Officer of a Task Unit initiating search operations from Palawan, Philippine Islands, in connection with operations against enemy Japanese forces in the Western Pacific War Area…" he was awarded the Bronze Star Medal. The citation states also that "As Executive and Operations Officer of Fleet Air Wing TEN, he was in large measure responsible for the outstanding records achieved by the units operating under his command…"

In October 1945, shortly after the Japanese surrender, he assumed command of USS San Pablo (AVP-30). He remained on duty in that command until July 1946, when he reported to the Bureau of Naval Personnel, to serve until June 1948 as Officer in Charge, Aviation Enlisted Personnel. During the year following, he was a student at the Naval War College, Newport Rhode Island, after which he had four weeks' instruction at the CIC School, Port Loma, (San Diego) California.

Ordered to USS Bairoko in July 1949, he served on board that carrier escort vessel until April 1950, when he was ordered to the Staff of Commander Air Force, Pacific Fleet, remaining in that capacity until October 1951. On November 12, 1951 he became Executive Officer of the Naval Air Station, Quonset Point, Rhode Island. He was detached early in 1954 and on May 10, that year, reported as Sub-Chief of the US Naval Mission, Peru, at Lima, Peru, and Naval Advisor to the Peruvian National War College there.

Returning to the United States in July 1956, he reported a month later to the Staff of Commander Military Air Transport Service, Andrews Air Force Base, Maryland, for duty as Director of Traffic. In December 1957 he was ordered to the Naval War College, Newport Rhode Island, and served there on the staff from February 1958 until June 1961. He then became Chief of Staff to the Commander US Naval Base, Subic Bay, Philippine Islands.