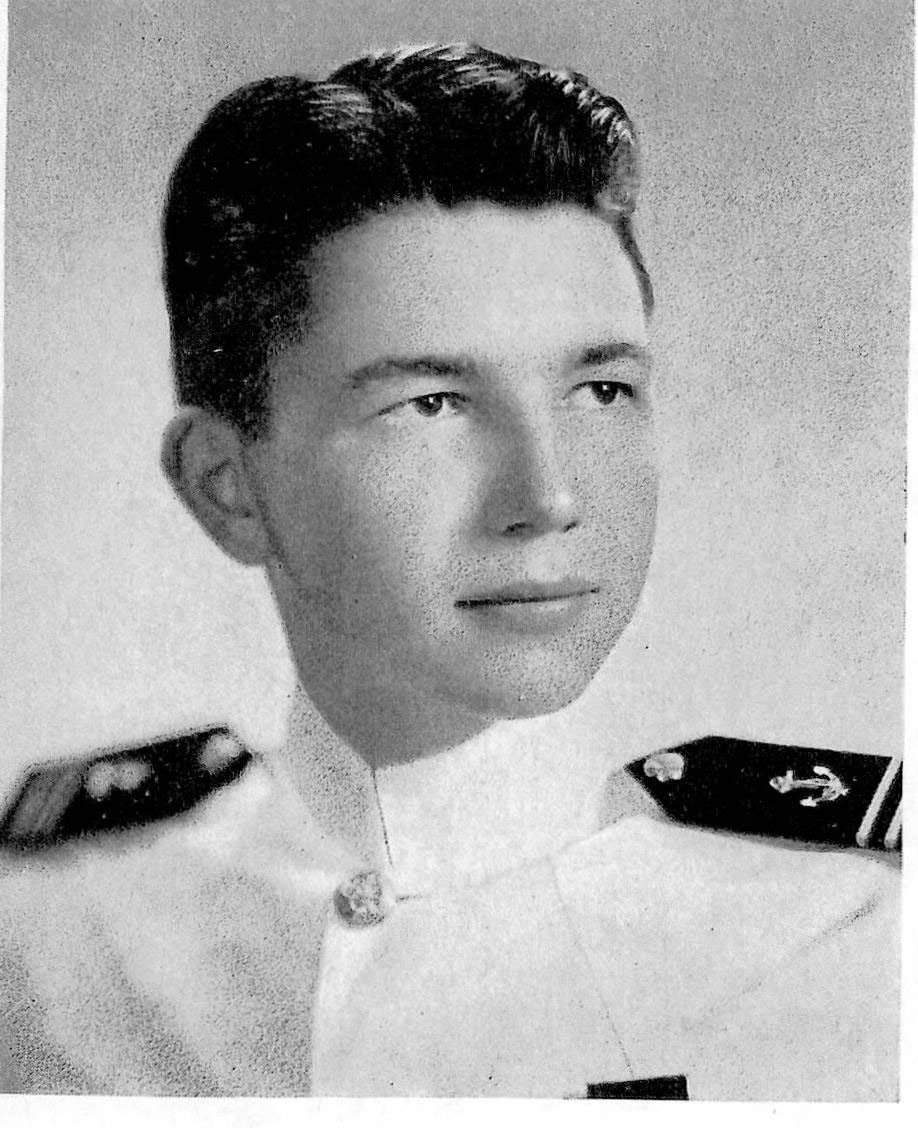 Vice Admiral Behrens assumed duty in the newly organized National Oceanic and Atmospheric Administration, Department of Commerce, on February 18, 1972. He holds the responsibilities of Naval Deputy to the Administrator and Assistant Deputy Administrator, and has had previous service in a number of assignments related to oceanography and to the national interest in the growing field of environmental sciences.

Admiral Behrens was born September 14, 1922, in Newport, Rhode Island, son of Mrs. William W. Behrens, Sr., and the late Rear Admiral Behrens, USN. He was graduated from the US Naval Academy and commissioned an Ensign on June 9, 1943. During 1944-45, he served in the Pacific Submarine Force six World War II submarine patrols, participating in the sinking of an enemy cruiser, several destroyers and other ships, and earning the Silver Star Medal, the Bronze Star Medal with Combat “V”, the Presidential Unit Citation and the Navy Unit Commendation, with personal citations for “conspicuous gallantry and intrepidity.”

As a junior officer during that war, Behrens was credited with the installation of the first electronic slip rings allowing for continuous, non-reversing trainability of submarine sonar equipment; and he also was cited for authoring the first short-form code for rapid radio communication between US submarines in wolf pack tactics against enemy task forces and convoys.

After WW II, Behrens served as Executive Officer of three different submarines and as project officer for the Navy’s first underwater telephone (UQC-1) for voice communications between submerged submarines and ships. Maintaining his interest in oceanographic and sonar developments, he also was assigned as project officer for the first US scanning sonar (initially removed from the captured German cruiser, Prinz Eugen, and developed as the QHB-1). Behrens then served a tour, 1950-52, at the Fleet Sonar School, Key West, as an anti-submarine warfare instructor and as Officer-in-Charge of Submarine Sonar instruction.

In 1953, Lieutenant Behrens was ordered to his first submarine command, USS Balao (SS-285), the conning tower of which submarine in now on display in the Washington Navy Yard. Next, as a Lieutenant Commander, Behrens was assigned command of USS Harder (SS-568), the Navy’s newest fast attack, post war diesel snorkeling submarine equipped with all the latest in underwater sonar and electronic detection devices.

Meanwhile, Behrens had commenced the study of nuclear physics and engineering. As the Idaho desert prototype for the world’s first nuclear submarine (Nautilus) was under construction, Behrens was considered for duty with the Atomic Energy program. In 1955, he was selected by Admiral Rickover to organize and serve as Director of the first Nuclear Power School. This entailed the drawing together of an effective faculty, the writing of required curricula and instruction, and pioneering in the teaching of the prospective operators of the Nation’s first reactor plants under the rigid rules to be developed by the AEC.

After successful graduation of the second year’s classes of nuclear students, Behrens was ordered to the AEC as Special Advisor to Admiral Rickover. Simultaneously completing his nuclear physics study through the doctorate level (although the formal Ph. D. was not assigned in the Navy program), Behrens qualified as one of the AEC’s first Reactor Operations.

Next, Behrens was assigned to specialize in the study and design of the nuclear reactor, S-5-W, at the Westinghouse Plant, Bettis, Penna. This type of water cooled reactor plant was destined to be the energy source for all the Navy’s fast attack and, ultimately, Polaris submarines. In 1958, Behrens was ordered as commanding Officer to place in commission the first of these high speed, whale shaped, nuclear submarines, USS Skipjack (SSN-585), which still lays claim to being the word’s fastest submarine. For this duty, Behrens was subsequently awarded the Legion of Merit “…for the completion of a mission of great value to the United States, “ and Skipjack was awarded the Navy Unit Commendation.

Commander Behrens was in 1961 selected for advanced study in missile weapons technology and inertial navigation, and then was assigned as commissioning Commanding Officer of USS Ethan Allen (SSBN-668), the first of the new nuclear submarines designed from the keel up for the Polaris mission.

To complete his studies for potential Flag responsibility, Behrens was, in 1963, assumed for a year of instruction at the prestigious National War College, which draws students from all top government agencies. After this study in foreign affairs and national policy and strategy, Captain Behrens served in Office of the Chief of Naval Operations. For this duty as Director, NATO Nuclear Force Plans, Office of Strategic Plans, he was awarded the Navy commendation Medal and was also authorized the Navy Unit Commendation (star for third award) of USS Claude V. Ricketts (DDG-5) for “many detailed planning studies to identify…NATO nuclear force requirements (and) repeatedly displaying outstanding tact and diplomacy in his coordination with representatives of the participating governments.”

Next, Captain Behrens was nominated by the Secretary of Defense, and chosen by the Secretary of State, for assignment to the select Policy Planning Council, Department of State. With the rank of Deputy Assistant Secretary of State, he served in this capacity and with the National Security Council staff from January 1966 until promoted to Rear Admiral in 1967. In addition to other policy issues, during this period he also worked closely with the Vice President’s Commission on Marine Science, Engineering and Resources, principally devoting his efforts to oceanic matters such as reviewing the Report of the President’s Science Advisor (PSAC, 1966), Law of the Sea reports, UN ECOSOC positions, etc., and preparing the President’s message of 1966 declaring, “We must ensure that the deep seas…remain the legacy of all human beings.” On his detachment from this position in August 1967, he was awarded the Joint Services Commendation Medal.

Rear Admiral Behrens served for the next two years as Commander US Seventh Fleet Amphibious Force/Amphibious Group ONE, largely engaged in amphibious naval and marine operations in Vietnam. For conducting 28 combat amphibious landings, including the war’s longest during TET 1968, and the largest in January 1969, Admiral Behrens was twice more awarded the Legion of Merit with Combat “V”, several Navy Unit and Meritorious Unit awards, three times decorated by the Vietnamese Government, and was awarded the Army Bronze Star (First Oak Leaf Cluster).

In July 1969, Behrens returned to Washington, DC, and assumed the responsibility of Director, Politico-Military Policy for the Navy. This duty involved political and military worldwide relations and policies; and, for outstanding performance in this capacity, Rear Admiral Behrens received his fourth Legion of Merit.

For seventeen months commencing in September 1970, he served as Oceanographer of the Navy. Here he directed the over $200 million Naval Oceanographic program with the assistance of four flag officer Assistant Oceanographers in the major areas, respectively, of Ocean Science, Ocean Engineering and Development, Oceanographic Operations, and Environmental Prediction. In June 1971, Admiral Behrens was appointed Federal Coordinator for Ocean Mapping and Prediction within the National Oceanic and Atmospheric Administration of the Department of Commerce. This position was established by the Vice President as Chairman of the Marine Council, and, with the Secretary of the Navy’s approval, Admiral Behrens’ appointment emphasized the increasingly close cooperation among the various departments and agencies of the Federal Government in developing the strongest possible National oceanographic effort. During this time, Behrens served on several international oceanographic committees and commissions, working with the International Hydrographic Bureau, the UN environmental subcommittees, etc. For these services he was awarded the Gold Star in lieu of Fifth Legion of Merit.

With his diversified background and much of his career devoted to scientific study and teaching, Vice Admiral Behrens was advanced to his present rank and loaned by the Navy to NOAA in February 1972.

Admiral Behrens also is the author of numerous articles and speeches, principally on subjects related to the uses of the oceans. In addition to his Naval Academy degree (B.S.E.E.), he hold a Master’s Degree in International Affairs from The George Washington University; is a Director of the Governing Board and the Editorial Board of the US Naval Institute and the Institute Press; a Director of the American Oceanic Organization; a Trustee of the United Seamen’s Service; a Trustee of The American Sailing Education Association; and holds membership in the following organizations: The Institute of Navigation; Marine Technology Society; American Association for the Advancement of Science; The Institute of Electrical and Electronics Engineers, Inc; Society of American Military Engineers: American Engineers; American Geophysical Union; The Arctic Institute; American Society of Naval Engineers; Smithsonian Institution, National Associated; Explorer’s Club; Propeller Club; the New York Yacht Club; the Army and Navy Club, and the Army and Navy Country Club, Washington, DC. Among his other public services, Admiral Behrens serves as a member of the Advisory Board, National Coalition for Marine Conservation, Savannah, Georgia; and as an Advisory Board Member, Services National Bank, Arlington, Virginia.