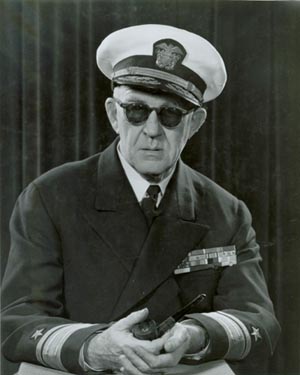 John Ford was born at Cape Elizabeth, Maine, on 1 February 1895. He was graduated from the public schools of Portland, Maine, in 1914, attended the University of Maine, Orono, Maine, from which he received an honorary degree of Doctor of Fine Arts in 1939, and directed motion pictures from 1920 on for the following Hollywood studios in Hollywood, California: Universal, Fox, United Artists, Metro-Goldwyn-Mayer, Radio-Keiths-Orpheum (RKO), and Twentieth Century-Fox.

In 1940, while on inactive duty in the Naval Reserve, he received a Letter of Commendation from the Commandant, Eleventh Naval District, for his "initiative in securing valuable information on California." In September 1941, after completing the direction of the motion picture How Green Was My Valley, and twenty-five years in the motion picture industry, he reported for active duty in the Office of the Chief of Naval Operations, Navy Department, Washington, DC. He had additional duty in the Office of Coordinator of Information, Photographic Presentation Branch, and while serving in that assignment made a historical and pictorial record in motion-picture photography of the Pearl Harbor attack.

From December 1941 until May 1943 he had temporary duties, in addition to his assignment in the Office of the Chief of Naval Operations, in the Canal Zone, Caribbean, South Atlantic Areas (December 1941); the Hawaiian Area (January 1942 and May 1942); European Theatre (August 1942); and Rio de Janeiro, Brazil (April 1943). In June 1942 he was in Midway during the battle for that island, observing and obtaining a photographic record from atop the Midway Island powerhouse, an obvious and clear target. He survived continuous attack and even though wounded was able to render a verbal report of the battle action, such information greatly aiding the Commanding Officer in the disposition of the defending American forces. In addition to photographing The Battle of Midway, later released by the War Activities Committee, he scored it and added dialogue.

He received a Letter of Commendation from the Commandant, Fourteenth Naval District "For distinguished service in the line of his profession when on June 4, 1942, the Naval Air Station, Midway Island, was severely bombed and strafed by Japanese aircraft. Despite his exposed position he remained at his station and reported to the Navy Command Center an accurate account of the attack, thereby aiding the Commanding Officer in determining his employment of the defending forces. His courage and devotion to duty were in keeping with the highest traditions of the Naval service."

He also was awarded the Purple Heart Medal for wounds received off Midway Island on 4 June 1942.

On 8 June 1943 he reported for duty in the Office of Strategic Services, Washington, DC, as Officer in Charge, Field Photographic Division, with additional duty as Director of Motion Pictures. The following August he had temporary additional duty as Technical Observer in the Burma-India-China Area. In April 1944 he served as Technical Observer with the Branch Office, Office of Strategic Services, London, England, in connection with the accomplishment of various reconnaissance flights in combat areas in preparation of strategic motion picture sequences from air.

In the Invasion of Normandy, June 1944, he organized the seaborne Allied photographic effort in the Invasion and was the Commanding Officer of the United States Navy and Coast Guard, and the Polish, French, and Dutch camera crews. In November 1944, after his return to the United States, he was temporarily released from active duty to return to Hollywood to work with Metro-Goldwyn-Mayer on production and direction of the motion picture They Were Expendable, which portrayed PT boat activity in the United States Navy.

In July 1945 he returned to active status in the US Naval Reserve and served again with the Office of Strategic Services, Washington, DC, until October 1945, when he was again released to inactive duty. For four years of outstanding services rendered the Government of the United States, he was awarded the Legion of Merit with citation as follows:

"For exceptionally meritorious conduct in the performance of outstanding services to the Government of the United States as Chief of the Field Photographic Branch, Office of Strategic Services, from September 1941 to September 1945. Voluntarily recruiting and organizing approximately three hundred technicians as a Naval photographic group, Captain Ford greatly aided in establishing the photographic branch of the Office of Strategic Services and, exercising close and careful supervision of numerous branch projects, developed valuable new equipment which is now in use by the United States Army Signal Corps. Energetic and resourceful, he worked tirelessly toward the preparation and direction of secret motion-picture and still photographic reports and ably directed the initiation and execution of a program of secret intelligence photography. Participating in the Battle of Midway, the Tokyo Raid, North African Invasion and Invasion of the Normandy Coast, Captain Ford controlled all seagoing photography of United Nations operations in these major battles, rendering this vital service under extremely difficult and dangerous combat conditions. Assigned the mission of observing and obtaining a photographic record of the impending enemy naval attack at Midway, Captain Ford courageously took station on top of the Midway Island power plant, were he remained a clear target as the enemy waged a savage, unexpected and continuous air attack and, although wounded early in the action, succeeded in delivering by telephone a running, verbal report of the battle, thereby aiding the Commanding Officer in the disposition and use of the defending American forces throughout the action. By his brilliant service in a highly specialized field, Captain Ford contributed materially to the successful prosecution of the war."

In civil life, Rear Admiral Ford wrote, directed, or produced more than 130 films in a career spanning four decades. He was awarded the Photoplay Magazine Gold Medal in 1928; the Critics Award in 1935 (for directing The Informer), in 1939 (for Stagecoach), and in 1940 (for The Long Voyage Home and The Grapes of Wrath); the Foreign Press Club Award and the Belgian Prix du Roi in 1935; and the Academy Motion Picture Arts and Sciences Directorial Award in 1935 and 1940. Additionally, he won Oscar Awards for The Informer, The Grapes of Wrath, How Green Was My Valley (1941), The Quiet Man (1952) and the documentary for the US Navy, The Battle of Midway (1942). In 1973 he received the American Film Institute's first Lifetime Achievement Award and the Presidential Medal of Freedom. He was a Member of the Motion Picture Directors Association and the Screen Directors Guild, and held various awards from foreign countries. 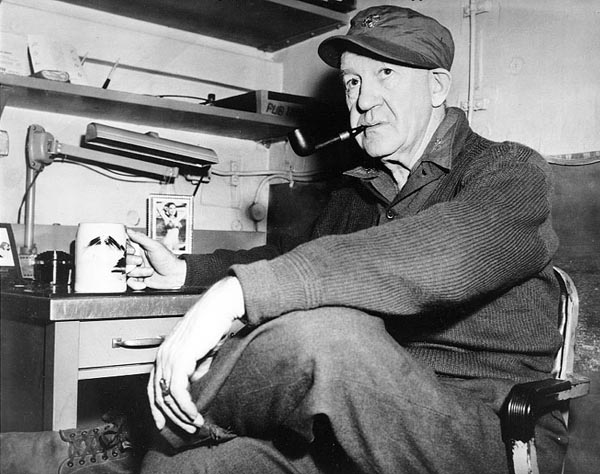