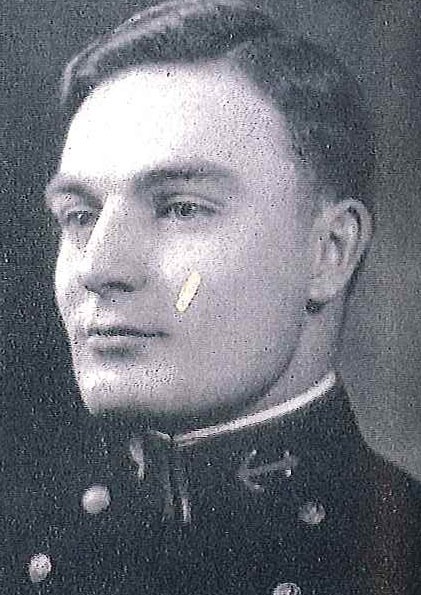 Prior to World War II, Commander Finney served aboard the light cruiser Marblehead, the submarine tender Bushnell, and the destroyer Hovey. Following duty aboard the vessels, he returned to Annapolis, Maryland, for instruction at the Postgraduate School, continuing the course at the Massachusetts Institute of Technology, Cambridge, Massachusetts, where he received the degree of Master of Science in Aerology in 1941. Later that year he was ordered to duty in the Pacific, on the staff of Commander, Patrol Wing 7.

Commander Finney is entitled to a facsimile of, and ribbon for, the Presidential Unit Citation awarded USS Essex, as a member of the carrier. The citation follows:

“For extraordinary heroism in action against enemy Japanese forces in the air, ashore and afloat in the Pacific War Area from August 31, 1943, to August 15, 1945. Spearheading the concentrated carrier warfare in forward areas, the Essex and her air groups struck crushing blows toward annihilating Japanese fighting power: they provided air cover for our amphibious forces; they fiercely countered the enemy’s aerial attacks and destroyed his planes; and they inflicted terrific losses on the Japanese in Fleet and merchant marine units sunk or damaged. Daring and dependable in combat, the Essex and her gallant officers and men rendered loyal service in achieving the ultimate defeat of the Japanese Empire.”

The citation accompanying the Legion of Merit awarded Commander Finney by Vice Admiral D.E. Barbey, USN, Commander, Seventh Fleet, for services during the amphibious operations of the Seventh Amphioxus Force during the period January 1944 to July 1944, follows:

“For distinguishing himself by exceptionally meritorious conduct in the performance of outstanding service in connection with amphibious operations against the enemy as a member of the planning staff of Commander Seventh Amphibious Force during the period January 1944 to July 1944. He also Force Navigator and Aerologist, and as such was directly concerned with the safe movement of large assault convoys enroute to landings at Aitape-Humbodt Bay, Tannamerah, Wakdee, Biak, Noemfoor, Sansapor, Morotai, Leyte and Lingayen. Though accurate aerological data was frequently lacking, by his tireless efforts and sound judgement he provided information that contributed materially to the success of these amphibious operations and for subsequent landings which extended from Luzon through the Central and Southern Philippines, Sulu Archipelago to Borneo. During the approach for the landing at Leyte he displayed outstanding professional skill and able seamanship in directing the passage of several hundred ships through enemy minefields at the entrance to Leyte Gulf.  He further displayed his professional skill by leading more than three hundred ships through the narrow confines of Surigao Strait. His excellent judging in planning and his performance of duty throughout were in keeping with the highest traditions of the Navy of the United States.”

In addition to the Legion of Merit with Combat “V,” and the ribbon for the Presidential Unit Citation to the USS Essex, Commander Finney has the American Defense Medal with Fleet Clasp, for service in the North Atlantic prior to December 7, 1941; the American Area Campaign Medal; the Asiatic-Pacific Area Campaign Medal with six battle stars; the Philippine Liberation Ribbon with two stars; and the World War II Victory Medal.

Commander Finney is the son of Captain Earl P. Finney, USN, Deceased. He was born at Annapolis, Maryland, while his father was an instructor in the Department of Marine Engineering and Naval Construction at the US Naval Academy in 1910, and was subsequently educated in the Moravian, Franklin and Neiser Schools, Bethlehem, Pennsylvania; the Horace Man and Carol Park School, Long Beach, California; Chicora School, Charleston, South Carolina; Coronado Grammar and High School, Coronado, California; Craddock High School, Portsmouth, Virginia, Severn School, Severn Park, Maryland, after which he entered the Naval Academy in 1928.