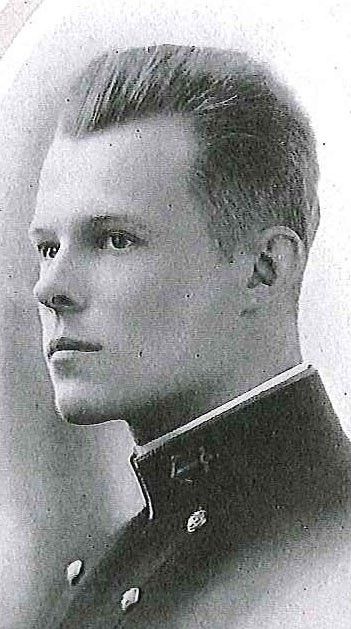 Following graduation from the Naval Academy in June 1915, Captain Armstrong was assigned to USS Arkansas, and later that year reported to USS Montana for instruction, after which he again joined the Arkansas.  During the early period of World War I, he had duty in connection with the training of Engineering Personnel aboard the USS Maine, and served successively aboard USS Robinson and USS Craven from June 1917, until his resignation from the Navy in November 1919.

On October 14, 1940, he was appointed Lieutenant in the United States Naval Reserve and on December 12 of that year reported to the Office of Naval Operations, Navy Department, Washington, DC, and served there until transferred in March 1941, to the Bureau of Ordnance.  Since Captain Armstrong’s return to the Naval service In December, 1940, he had been attached to the Bureau of Ordnance, Navy Department, Washington, DC.  While in the Bureau, Captain Armstrong assisted the Navy “E” and Bureau of Ordnance flag to companies establishing outstanding production records in the manufacture of Naval Ordnance material.

On May 29, 1942, he reported to the Ninth Naval District for temporary duty at the Naval Training Station, Great Lakes, Illinois.  He returned to the Navy Department in September 1944, and following brief service in the Bureau of Naval Personnel was ordered to report to the Twelfth Naval District, and thence to Commander in Chief, Pacific Ocean Area until October 1945.  For his services in that assignment, he was awarded the Bronze Star Medal with the following citation:

“For meritorious service as Assistant to the Officer-in-Charge, Enlisted Personnel Division, Naval Personnel Office, attached to the Staff of Commander Service Force,  United States Pacific Fleet, in connection with operations against enemy Japanese forces in the Pacific War Area, from November 1944, to November 1945.  Charged with the direct supervision of all negro Naval personnel in this war area, Captain Armstrong skillfully discharged his duties, thereby contributing materially to the successful performance of his personnel during operations against the enemy.  His administrative knowledge and devotion to duty were in keeping with the highest traditions of the United States Naval Service.”

He returned to the United States and following a short period of temporary service in the Bureau of Naval Personnel in connection with Negro Personnel, he reported to Naval Personnel Separation Center, Washington, for separation processing.  On March 13, 1946, he was released from all active duty.

Captain Armstrong was the son of Brigadier General S.C. Armstrong, a famous leader of the 8th U.S. Negro troops during the Civil War and founder of Hampton Institute, dedicated to the princile of enhaling Negroes to became self reliant and set an examples of industry for their own people.  Captain Armstrong from 1929, was a trustee of Hampton Institute which was commended "for effective cooperation in the training of Naval Personnel during World War II" by the Secretary of the Navy.