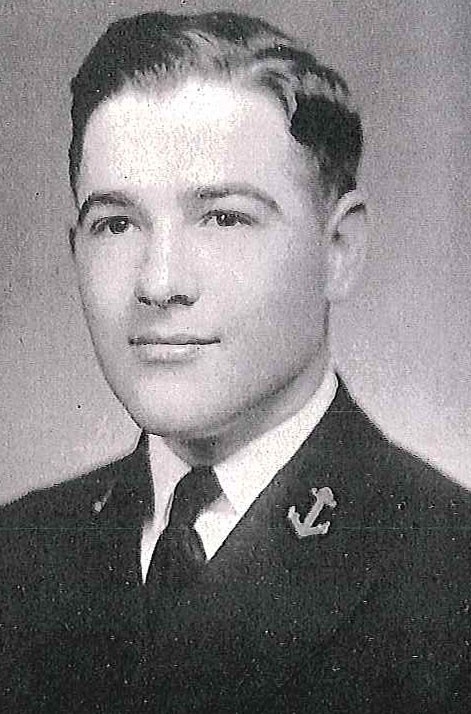 Stephen Wriston Carpenter was born in Stanley, North Carolina on December 20, 1911, son of Oscar B. and Lula Pinckney (Smith) Carpenter. He attended Kings Mountain (North Carolina) High School and University of North Carolina at Chapel Hill, prior to his appointment to the US Naval Academy, Annapolis, Maryland, from his native state in 1931. As a Midshipman he was Manager of the lacrosse Team in 1935. Graduated and commissioned Ensign of June 6, 1935, he subsequently advanced in rank, attaining that of Captain, to date from March 1, 1954.

Following his graduation from the Naval Academy in 1935, he joined USS Mississippi, and in December 1936 reported aboard USS Eliot. He had further duty afloat in USS Nashville between May 1938 and June 1941, when he was ordered to the Postgraduate School, Annapolis, Maryland, for instruction in ordnance engineering. He continued the course, September 1942 until September 1943, at the Massachusetts Institute of Technology at Cambridge, from which he received the degree of Master of Science.

In September 1943 he reported as Gunnery Officer aboard USS San Jacinto, and in that capacity participated in operations at Saipan, Tinian, and Guam. “For extraordinary heroism in action against enemy forces in the air, ashore, and afloat in the Pacific War Area…” he is entitled to the Ribbon for, and a facsimile of the Presidential Unit Citation awarded the USS San Jacinto. Detached from the San Jacinto in August 1944, he transferred to the US Colorado to serve as Gunnery Officer during operations at Leyte, Mindoro, Lingayen Gulf, Okinawa, and in the occupation of Japan, until October 1945. He was awarded the Legion of Merit with Combat “V,” for “exceptionally meritorious conduct… as Gunnery Officer of the USS Colorado, during extended operations against enemy Japanese forces in the Philippine Islands and the Ryukyu Islands, from November 19, 1944 to May 1945…”The citation further states in part:

Despite numerous hostile suicide aerial and small boat attacks (he) rendered invaluable assistance to his commanding officer in organizing, planning and delivering destructive bombardments against enemy positions and contributed materially to the success of his ship in supporting the landings and advanced of out assault troops…”

In October 1951 he assumed command of USS Shelton, which under his command had two cruises in the Korean theater, October 1951 to April 1952, and November 1952 to April 1953. The Shelton participated in operations of Task Forces Seventy Two, Seventy Seven and Ninety Five in 1951, 1952, and 1953. “For meritorious service … (in that command) during operations against the enemy in the Korean theater from December 3, 1952 to April 20, 1953…” he was awarded the Bronze Star Medal with Combat “V.” The citation further states in part:

“… During this period the Shelton participated in offensive operations against the enemy as a unit of Task Force Seventy Seven and Ninety Five. For a period of thirty-nine days, the Shelton operated in the Wonsan Harbor area of North Korea within range of enemy guns and was taken under fire, calm, resolute ship handling in confined spaces, he avoided enemy gunfire while effectively directing the fire of his own, he displayed sound judgment in the deployment of vessels assigned his unit to obtain maximum patrol coverage and gun fire support for min sweeping units…”

Detached from command of the Shelton in April 1953, he became Commander Mine Squadron Five the next month. He continued to serve in that command until May 1954, and following brief instruction, June 27 to July 10, 1954 at the Armed Forces Special Weapons Project, Sandia Base, Albuquerque, New Mexico, he reported as Commanding Officer of the Clarksville Base, Tennessee, with additional duty as Commanding Officer of the US Naval Administrative Unit, Clarksville Base, Tennessee.

He is a member of Kappa Alpha fraternity.