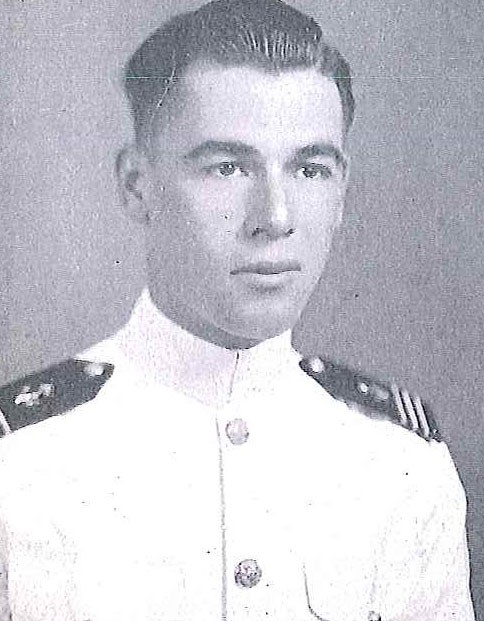 Russell Francis Flynn was born in Leesville, Connecticut, on August 15, 1918, son of Henry Patrick and Olive E. (Crocker) Flynn. He attended Nathan Hale High School, East Haddam, Cannecticut and the National Preparatory Academy, Cornwall-on-hudson, New York. From July 1937 to June 1938 he was attached to the Thirteenth Infantry, US Army as a Private and attended the West Point Preparatory School, Fort Williams, Maine. In 1938 he entered the US Naval Academy, Annapolis, Maryland, on appointment from his native state. Graduated with the Class of 1942, on December 19, 1941 (course accelerated due to wartime emergency), and commissioned Ensign, he subsequently advanced in rank to that of Captain, to date from July 1, 1961.

Following graduation from the Naval Academy in 1941, he joined USS Mississippi and participated in the Attu occupation before he was detached in July 1943 for instruction in applied communications at the Postgraduate School, Annapolis, Maryland. In July 1944 he reported as Communications Officer on board USS Pennsylvania and while attached to that battleship saw action during the capture and occupation of Guam and the Palau Islands and the landings at Leyte and Lingayen Gulf. He was on board the Pennsylvania when she was damaged by an enemy aircraft torpedo in the Okinawa area on August 12, 1945. He is entitled to the Ribbon for, and a facimile of the Navy Unit Commendation awarded the Pennsylvania.

He assumed command of USS Harold J. Ellison (DD-864) in June 1957 and in August 1959 was detached from that destroyer for duty as an Instructor at the Atlantic Fleet Anti-Submarine Warfare Tactical School, Norfolk, Virginia. In December 1960 he joined the Staff of the Commander in Chief, US Atlantic Fleet and in March 1963 assumed command of USS Mt. McKinley (AGC-7). In February 1964 he was designated Commanding Officer of the Naval Communication Station, Norfolk, Virginia.