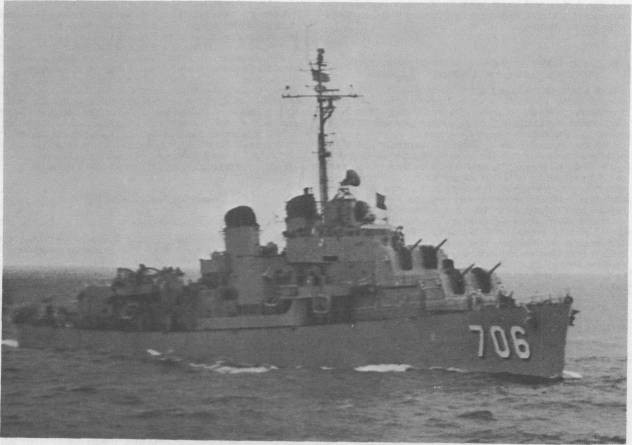 Joseph Aloysius Gainard, born 11 October 1889 in Chelsea, Mass., enlisted in the U.S. Naval Reserve Force 23 November 1917. He received the Navy Cross for distinguished service while Master of American merchant steamer City of Flint, seized by a German cruiser on the high seas 9 October 1939 but returned to him in a Norwegian fjord 3 November. Recalled to active duty on 30 July 1941, he commanded submarine decoy ship Big Horn (AO-45) in the Caribbean, then commanded attack transport Bolivar (APA-34) in the Pacific. Illness took Captain Gainard from this duty and he died in the U.S. Naval Hospital at San Diego, Calif., 23 December 1943.

After shakedown training off Bermuda, Gainard departed New York on 1 February 1945 for operations out of San Diego and Pearl Harbor. She departed Pearl Harbor on 12 March and staged at Saipan for the forthcoming invasion of Okinawa, acting as a part of a decoy task force that made feints against the southeastern coast between 1 and 2 April while the landings were effected on the western beaches.

Gainard operated as radar picket and fighter director ship throughout the Okinawa Campaign, detecting enemy air raids, providing early and continuous information to friendly forces, and initiating interception with a Combat Air Patrol unit that found her controlling an average of 10 planes from dawn to dusk with the assistance of a fighter director team on board. In 39 days on picket stations she was instrumental in the destruction of at least 28 suicide planes, four of which were shot down by her gunners.

On 27 occasions enemy aerial strikes of 50 or more planes attacked Gainard and ships in her immediate vicinity. Seventeen of these attacks were close aboard the destroyer, and four nearby ships were hit by suicide planes. She manned the fighter director unit for initial landings at Iheya Shima, Aguni Shima, and Kume Shima. Gainard also rescued the crew of a Navy patrol bomber which had run out of fuel and landed in the sea, and she directed two other damaged patrol planes back to their base. Though several times narrowly missed by determined runs of suicide planes, her skillful gunners and effective maneuvering prevented damage. She remained on station until 1 July 1945 when Okinawa was officially declared secured.

After patrol and convoy escort duty in approaches to Okinawa, she sailed on 21 July 1945 to the Philippines for logistics and upkeep. The destroyer arrived off Honshu, Japan, on 17 September and served as air-sea rescue ship until 21 February 1946 when she sailed for the United States. Gainard reached San Pedro, Calif., on 15 March, then steamed via the Panama Canal to Casco Bay, Maine, arriving on 16 April.

Based out of Newport, R.I., her operations over the next 20 years have included nine deployments as an antisubmarine warfare specialist with the 6th Fleet; several cruises to northern Europe for the training of midshipmen; amphibious warfare exercises along the coasts of Virginia and North Carolina; plane guard duty for aircraft carriers off Mayport, Fla.; and combined Second Fleet exercises and antisubmarine tactics along the Atlantic seaboard and in the Caribbean.

As one of 150 warships from six NATO nations, in September 1957 Gainard participated in Exercise Strikeback, large-scale combined fleet maneuvers that ranged over the North Atlantic to waters adjacent to the British Isles, between Iceland and the Faeroes, and into the Norwegian Sea and portions of the North Sea. This was only one of many operations in which Gainard made important contributions to improve the overall combat readiness of forces earmarked for the Allied command in defense of the free world.

Gainard's eighth tour with the Sixth Fleet (August 1960-February 1961) was interrupted by six weeks of combat readiness operations with the Middle East forces in the Indian Ocean. During her ninth Mediterranean tour (February-August 1962), she transited the Suez Canal for five days of battle rehearsals with units of the British and Iranian Navies and many days of realistic training in the Red Sea and the Persian Gulf. Other vital tasks included school ship duties for the Fleet Sonar School at Key West, Fla.; participation in Operation Mercy with carriers Shangri La (CVA-38) and Antietam (CVS-36) in rendering assistance to thousands of flood-stricken victims of Hurricane Carla off the Texas coast during September-October 1961; gunnery schoolship duties for the Fleet at Norfolk; and service as a unit of the Cuban Contingency Task Groups during the Cuban Missile Crisis of November-December 1962.

In May 1963, Gainard served as support ship on recovery station during the successful launching of Faith 7, the ninth and final Project Mercury manned space flight, piloted by Astronaut L. Gordon Cooper. In addition, between 1963 and 1967 Gainard has continued schoolship and support services in the Caribbean and along the Atlantic and Gulf Coasts from Newport to New Orleans.

Gainard received the Navy Unit Commendation for her extraordinary heroism in action off Okinawa (20 April-30 June 1945), and one battle star for her World War II service.