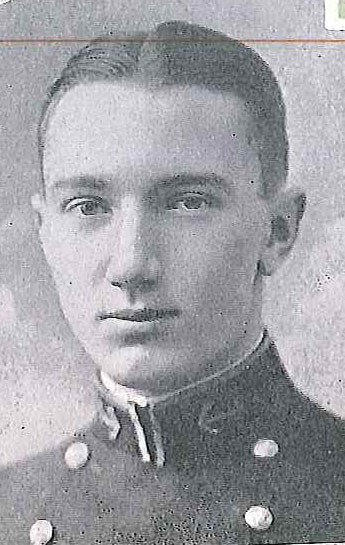 Herbert Frederic Eckberg was born in Jamestown, New York, on May 19, 1906, son of Arvid W. and Clara A. (Lundquist) Eckberg. He attended Jamestown High School, prior to his appointment to the US Naval Academy, Annapolis, Maryland, from his native state in 1923. As a Midshipman he was a member of the Plebe and Varsity Rifle Teams. Graduated and commissioned Ensign on June 2, 1927, he subsequently advanced in rank, attaining that of Captain to date from March 20, 1945.

Following graduation from the Naval Academy in 1927, he joined USS Tulsa. Detached from that ship in May 1928, he next had duty in the Division of Fleet Training, Office of the Chief of Naval Operations, Navy Department, Washington, DC. Between January 1929 and May 1933 he was assigned to USS Detroit, interspersed with instruction, January-June 1930, at the Naval Torpedo School, Newport, Rhode Island. In June 1933 he reported as Engineer Officer on board  USS King, serving in that destroyer until April 1934, after which he attended a course in marine engineering (design) at the Postgraduate School, Annapolis, Maryland. He continued instruction at the University of California at Berkeley, from which he received the degree of Master of Science in 1937.

In July 1937 he joined USS Pecos as Engineer Officer and while attached to that oiler assisted in the evacuation of refugees from North China in 1937. Detached from the Pecos in March 1939 he next had duty as Squadron Maintenance Officer on the staff of Command Destroyer Squadron FIVE and in March 1940 reported as Assistant Engineer Officer on board USS Wyoming. In December 1940 he was assigned to the Naval Mission to Venezuela, where he served as Engineer Member and later Chief of the Mission and Director of the Venezuelan Naval Academy. “For exceptionally meritorious conduct. . . as Chief of the United States Naval Mission to Venezuela from May 1, 1941 to December 1943. . .” he was awarded the Legion of Merit. The citation continues in part:

“With a profound understanding of the problems of the Venezuelan Navy, Captain Eckberg skillfully developed mutual respect, friendship and cooperation between the United States and Venezuela and thereby rendered invaluable assistance in maintaining close military collaboration by the Naval forces of the two counties. By his tact, leadership, superb professional ability and conscientious devotion to the fulfillment of an important task, (he) contributed to the successful prosecution of the war against our common enemy. . .”

In March 1944 he joined USS Brooklyn to serve as Damage Control, First Lieutenant and Executive Officer. He received a Letter of Commendation, with authorization to wear the Commendation Ribbon, from the Commander EIGHTH Fleet for outstanding services as Executive Officer of USS Brooklyn prior to and during the amphibious invasion of Southern France in August 1944. From September 1945 until March 1946 he commanded USS Anne Arundel, after which he had duty ashore until June 1948 as Head of Naval Advisory Groups and Missions other than Latin America in the Office of the Chief of Naval Operations, Navy Department.

Assigned to the Naval War College, Newport, Rhode Island, he was a student there for one year and for the next year served on the staff. From June 1950 until April 1952 he had duty in the Division of Intelligence, staff, Commander in Chief, Caribbean, followed by an assignment as Commanding Officer of USS Cambria. In April 1953 he became Commander Transport Division TWENTY-TWO, and in May 1954 reported as Naval Member on the staff and faculty at the Army War College, Carlisle Barracks, Pennsylvania.