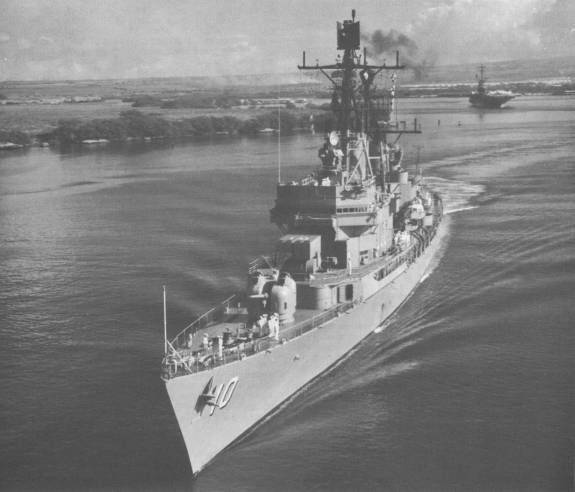 The first King was named after Frank Ragan King, born 15 October 1884 in Montevallo, Ala. He was appointed midshipman at the Naval Academy 6 May 1903 and graduated 11 February 1907. After serving as passed midshipman, he was commissioned Ensign 12 February 1909. He served in Arkansas, Hartford, Milwaukee, Pennsylvania, and Illinois before attaining the rank of Commander 21 September 1918. He assumed command of trawler Richard Buckley 7 July 1919 during minesweeping operations in the North Sea. On 12 July 1919 his ship struck a mine and went down in only 7 minutes.

During the crisis King exerted himself to see that all of his crew might be saved. King's feeling for his men was evidenced by the fact that his final act before going down with his ship was to strap his own life preserver to a stunned sailor and help him over the side. Comdr. King received the Distinguished Service Medal for his valor.

The second King (DLG-10) was named after Ernest Joseph King, born 23 November 1878 in Lorain, Ohio. He was appointed to the Naval Academy in 1897. In July 1898, during the Spanish-American War, he served as Naval Cadet in San Francisco, flagship of the Northern Patrol Squadron. Upon graduation from the Academy he was commissioned Ensign 7 June 1903.

Prior to World War I King served in the Asiatic Fleet, Atlantic Fleet, and shore duty at Annapolis, Md. During World War I he served as Aide and Squadron Engineer to Admiral Mayo, Commander in Chief, Atlantic Fleet. After the war, with the rank of Captain, he again served at the Naval Academy as head of the Postgraduate Department.

King next turned his attention to submarines and the expanded role of naval aviation. After training at Pen-sacola, he received his wings. He was named Assistant Chief of the Bureau of Aeronautics-, Navy Department in August 1928. After promotion to Rear Admiral 26 April 1933 King served as Chief of the Bureau.

On 1 February 1941 he was designated Commander in Chief, Atlantic Fleet with the rank of Admiral. Soon after the United States entered World War II, President Roosevelt appointed King Chief of Naval Operations and the Senate confirmed the appointment 18 March 1942. In this office, with wisdom, inflexible integrity, and determination, he mapped out the strategy and vigorously directed the operations of the unprecedented naval campaigns which led to victory over Axis powers in Europe and crushed Japan in the Pacific. By act of Congress 14 December 1944, the grade of Fleet Admiral U.S. Navy was established; his appointment to that rank was confirmed the same day.

After he was relieved by Fleet Admiral Nimitz as Chief of Naval Operations, King continued to serve on active duty in an advisory capacity in the Office of the Secretary of the Navy. He died at the Naval Hospital,. Portsmouth, N.H., 25 June 1956. During his naval career, Fleet Admiral King received the Navy Cross, and the Distinguished Service Medal with two Gold Stars, in addition to many other awards from the United States and foreign governments.

After shakedown along the coast, and in Hawaiian waters, King continued training out of San Diego for the remainder of 1961. Following extensive preparations the guided-missile frigate sailed on her first WestPac cruise, 7 June 1962, strengthening the mighty 7th Fleet with her Terrier missile arsenal. Operating with this mighty peacekeeping force, King helped to check Communist aggression in Southeast Asia.

Upon returning San Diego 31 December, she resumed tactical exercises off the West Coast until 1 August 1963 when she departed on her second WestPac cruise. Once again her operations with the 7th Fleet helped maintain stability in the Far East. King returned San Diego 10 March 1964 and conducted operations along the coast, for the rest of the year constantly perfecting her fighting skills and increasing the peacekeeping ability of the Navy.

King headed back for the Far East 5 April 1965 escorting Oriskany (CVA-34). She operated from the South China Sea during May screening carriers and participating in air-sea rescue work. She continued to serve off Vietnam until returning to San Diego 2 November.

The guided missile frigate operated off the West Coast until heading back for the Western Pacific 26 May 1966. On this cruise she carried a helicopter for search and rescue missions to save American pilots during strikes against North Vietnam. She arrived Da Nang, South Vietnam, 27 June. During July she saved five downed aviators, including one who was rescued from deep within North Vietnam by the ship's daring helicopter crew. In August the ship was stationed in a positive identification and radar advisory zone (PIRAZ) in the Gulf of Tonkin to help protect American ships from enemy aircraft. Before she was relieved, she had checked over 15,000 aircraft. During this duty she also rescued seven pilots whose planes had gone down during strikes against enemy targets. She continued this duty, except for brief runs to Hong Kong and Subic Bay, until relieved by Long Beach (CGN-9) on 29 November.

King returned to San Diego 20 December and operated off the West Coast into 1967 preparing for future action.