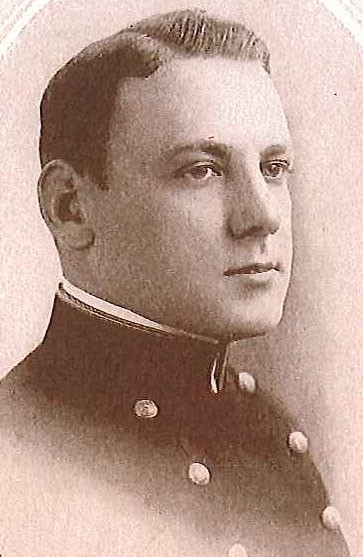 Russell Stanley Berkey was born in Goshen, Indiana, on August 4, 1893, son of the late Albert Berkey and Mrs. Lenora Murray Berkey. He attended grade and high schools in Goshen before his appointment to the United States Naval Academy, Annapolis, Maryland, from the 13th Congressional District of Indiana in 1912. Graduated with distinction (5th in a class of 178) and commissioned Ensign on June 3, 1916, he thereafter received temporary promotions to Lieutenant, both grades, during World War I, was commissioned in those ranks as of 1919 and 1920, respectively, and subsequently attained the rank of Vice Admiral on July 1, 1948. His retirement from the Naval Service due to physical disability became effective on September 1, 1950, when he was advanced in rank to Admiral on the basis of combat awards.

After graduation in 1916, he joined USS New York, one of the battleships which operated with the British Grand Fleet during World War I. During the war period he had additional duty at the Royal Naval Air Station, Rochampton, England. Detached from the New York in November, 1920, he was assigned duty as Aide and Flag Secretary on the staff of Commander Destroyer Force, Pacific Fleet, USS Brooklyn, and later USS Charleston, flagships. In October, 1921 he reported aboard USS Selfridge to serve as Executive Officer of that destroyer until June, 1922. Returning to the Naval Academy, he served one year as Assistant to the Commandant of Midshipmen.

From June, 1923 to November, 1925 he had consecutive duty as Aide and Flag Secretary; Aide and Division Radio Officer, and Aide and Flag Lieutenant on the staff of Commander Battleship Division FOUR, Battle Fleet, aboard the flagships USS Arizona, later USS New Mexico. Following brief duty in the Office of the Chief of Naval Operations, Navy Department, Washington, DC, he joined USS Concord in January, 1926, and served as Gunnery Officer until June, 1927. The Concord was awarded trophies for excellence in gunnery and battle efficiency during the period he was aboard.

The summer of 1927 he was under instruction at the Naval War College, Newport, Rhode Island, after which he had three years duty as Aide and Flag Secretary on the staff of Admiral William V. Pratt, who was successively Commander Battleship Divisions, Battle Fleet; Commander in Chief, Battle Fleet; and Commander in Chief, US Fleet. He continued duty as Aide from September, 1930 to December, 1932 when Admiral Pratt was Chief of Naval Operations.

In January, 1953 he was ordered to Asiatic Station, and on February 1, he assumed command of USS Panay, operating on the Yangtze River. Transferred in July, 1934 to USS Smith Thompson, he remained in command of that destroyer until March, 1936. Returning to the United States, he served as Port Director, Naval Operating Base, Norfolk, Virginia, from May, 1936 until June 7, 1938. He attended the Naval War College the following year, completing the senior course there in May, 1939.

From June, 1939 until February, 1941, he served as Commander Mobile Target Division ONE, Base Force, Pacific Fleet, USS Dorsey, flagship. Reporting for duty in connection with conversion of USS Lassen (former SS Shooting Star) at the Alabama Dry Dock Company, Mobile, Alabama, he assumed command of that auxiliary, and served from February to October 30, 1941.

Following brief duty in the Office of the Chief of Naval Operations, he was assigned as Assistant Commandant, Naval Operating Base, Iceland, and served from December, 1941 to October, 1942. He then had duty at the New York Shipbuilding Corporation, Camden, New Jersey, in connection with fitting out USS Santa Fe, and upon her commissioning, November 24, 1942, he assumed command of that cruiser. Under his command the Santa Fe participated in the Aleutians Operations at Attu and Kiska, April-August, 1943, before proceeding to the Central Pacific areas. He was awarded a Gold Star in lieu of a second Legion of Merit with combat distinguishing device “V”, and cited “For exceptionally meritorious conduct in the performance of outstanding services…as Commanding Officer of USS Santa Fe in the Northern and Central Pacific Areas, from April 26 to December 25, 1943…A brilliant leader, (he) assured the precise execution of each assignment and, by his alert and cool command of his warship, contributed materially to the success of our early Naval Campaigns in the Pacific…”

From December, 1943 until July, 1945, he served successively as Commander, Cruiser Division FIFTEEN, and Task Force 75; as Commander Cruisers, Seventh Fleet, and Task Force 74, For his services in these commands, he was awarded the Legion of Merit, the Navy Cross, the Distinguished Service Medal, the Gold Star in lieu of a Third Legion of Merit, as well as the Army Distinguished Service Medal. The citations, in part, follow:

Legion of Merit, with Combat “V”: “For exceptionally meritorious conduct…during action against enemy Japanese forces in the Southwest Pacific Area from December 6, 1943 to September 25, 1944…. Expertly coordinating the efforts of units of the Australian Navy with those of his own command in bombardments against strong hostile defenses throughout every assault and in support of every landing on enemy-held territory in the Southwest Pacific, he led his gallant men-of-war in repelling repeated day and night air attacks, neutralizing Japanese resistance and driving off hostile vessels attempting to reinforce troops ashore, thereby enabling out forces to seize and occupy important bases for launching future operations…”

Navy Cross: “For extraordinary heroism as Commander, Cruiser Division FIFTEEN, on board the USS Santa Fe, in action against major units of the enemy Japanese Fleet during the Battle of Surigao Strait, Philippine Islands, in the early hours of October 25, 1944. When the tactically disposed destroyer units initiated a series of torpedo attacks against a formidable column of Japanese battleships, cruisers and destroyers advancing under cover of darkness toward our waiting forces, (he) skillfully directed his division into advantageous striking position despite extremely hazardous conditions, and opening fire with precise timing in a sudden coordinated onset, delivered a smashing bombardment and, surprising the enemy, aided materially in putting him to rout…”

Distinguished Service Medal; “For exceptionally meritorious service to the Government of the United States in a duty of great responsibility as Commander Task Force SEVENTY-FOUR and Commander Cruisers, SEVENTH Fleet, during operations in the Philippine Islands Areas from September 26, 1944 to February 1, 1945…(He) was directly responsible for the effective support provided by his Task Force during the invasions of Leyte and Lingayen. His skill in coordination of Allied Naval and Military operations, his sound judgment in the preparation of plans and his professional leadership were contributing factors in the success of our offensive operations during the closing phase of our war in the Southwest Pacific against Japan…”

Gold Star in lieu of Third Legion of Merit, with Combat “V”: “As a Task Group Commander during our amphibious landing operations at enemy Japanese-held Mindoro, Philippine Islands, from December 12 to 17, 1944…(He) expertly deployed his ships for maximum strength to fight off repeated devastating aerial strikes by strong forces of Japanese aircraft and, by his superb courage and steadfast determination in the face of tremendous opposition, contributed essentially to the success of the Mindoro Campaign and to the sustained westward advance of our forces.”

Army Distinguished Service Medal: “…for outstanding services from January to July, 1943…Rear Admiral Russell S. Berkey United States Navy, performed exceptionally meritorious and distinguished service to the Government in a position of great responsibility in the Southwest Pacific Area, from February to July 1945, as Commander, Task Force Seventy-four, Seventh Fleet. He provided naval cover and combat support for assault landings at Mariveles, Southern Bataan, and on Corregidor, and most skillfully directed his cruisers and destroyers in maintaining highly effective pre-landing fire…By his exceptional ability in planning and coordinating combined operations, and superior handling of his forces, Admiral Berkey made a major contribution to the liberation of the Philippine Islands and Borneo.”

When relieved of his command in July, 1945, he returned to the Navy Department, Office of the Chief of Naval Operations, and was assigned duty as Officer-in-Charge, Civil Liaison Section, newly established. In May, 1946 that section was transferred to the Executive Office of the Secretary of the Navy. Under that office, on November 4, 1946, he transferred to duty as a member of the Board to Survey the Shore Activities of the Naval Establishment.

On June 15, 1947, he reported for duty as Commander, US Naval Base, New York, New York, and on January 28, 1948, he was ordered to Japan for duty as Commander Support Group, Naval Forces, Far East. On July 9, 1948, he became Commander Naval Forces, Far East with the accompanying rank of Vice Admiral. He remained in that assignment until August, 1949, when he assumed command of the Seventh Fleet, USS Toledo, flagship. Orders of March 6, 1950 relieved him of that command, and in June, 1950 he reported as Chief of Information, Navy Department. He was relieved of active duty due to physical disability and transferred to the Retired List of the Navy, effective September 1, 1950.