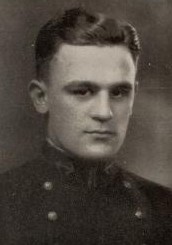 Rudolph Charles Bauer was born in Jersey City, New Jersey on September 18, 1906, son of Rudolph William and Maria Osten Bauer.  He attended New York University and Fordham College in New York, New York, before his appointment to the US Naval Academy from the Twenty-First District of New York in 1926.  As a Midshipman he was active in athletics, playing on the varsity basketball, baseball, and football teams.  Graduated and commissioned Ensign on June 5, 1930, he progressed in grade, attaining the rank of Captain to date from July 1, 1949.  On February 1, 1955 he was transferred to the Retired List of the US Navy and was advanced to the rank of Rear Admiral on the basis of combat awards.

After graduation from the Naval Academy, he had preliminary flight training at the Naval Air Station, Naval Operating Base, Hampton Roads, Virginia, and in August 1930 joined the USS Mississippi.  He served in that battleship until April 1931, after which he reported to the Naval Air Station, Pensacola, Florida, for flight training.  He was designated naval aviator March 17, 1932, and in July joined Torpedo Squadron 1-B, based on the aircraft carrier Lexington.  He served with that Squadron until April 1935, when he was transferred to Scouting Squadron 3-B, also based on the Lexington.

From July 1935 until May 1937 he served with Patrol Squadron 4-F and Patrol Squadron 6-F, based on Pearl Harbor, T.H., and during that period made the first flight from San Diego, California, to Pearl Harbor with VP-6F in January 1937.  He next served with Scouting Squadron 9-S, redesignated Cruiser Scouting Squadron 4, aviation unit of the USS Pensacola, and in May 1939 was transferred to Utility Squadron 2, attached to the USS Rigel.  He remained with the latter Squadron until July 1941.

In August 1941 he reported for duty at the Naval Air Station, Tongue Point, Oregon.  During his assignment there until July 1943, that Station was redesignated Naval Air Station, Astoria, Oregon, in May 1943.  He was awarded the Air Medal for rescuing the sole survivor of an Army bomber which had crashed at sea.  The citation states: “After an intensive search over floating wreckage and oil slick, spotted a lone survivor in the water less than one mile off shore.  In the face of high winds and heavy swells he effected a precarious landing at sea, hauled the helpless man aboard, and flew him back to medical attention in such a shocked and exhausted condition that a few minutes’ delay might have proved fatal.  By his superb airmanship, maintained with utter disregard for his own personal safety, he saved the life of a member of the United States Army Air Corps who might otherwise have perished from exposure.”

In July 1943 he reported for duty in connection with the precommissioning detail of the USS Anzio (previously assigned the name Coral Sea), at Astoria, Oregon, and served as air officer of that carrier escort for two months after he commissioning on August 2, 1943.  In October of that year he was assigned duty in connection with fitting out the USS Kalinin Bay at the Kaiser Company, Vancouver, Washington, and served as her Executive Officer from her commissioning, November 27, 1943 until February 28, 1945.

During his service aboard the Kalinin Bay, one of a group of sixteen carrier escorts and their screens carried a heavy share of the Battle for Leyte Gulf in October 1944, in which twenty-five powerful ships of the Imperial Japanese Fleet were defeated in one of the longest surface engagements of the war.  Throughout the battle, the Commanding Officer and Executive Officer of the carrier passed information to the Chaplain to be relayed to the men below decks, a big moral factor.  The Kalinin Bay was damaged in this action and repaired at Terminal Island, California.  She was returned to the Fleet in the record time of six weeks, a feat made possible through a new technique of the Bureau of Ships which “V-Mailed” blueprints in microfilm to shipyards while damaged ships were returning to the United States.

He was awarded the Silver Star Medal for “distinguishing himself by gallantry and intrepidity in action during the engagement of the carrier USS Kalinin Bay, against overwhelming enemy forces off Samar Island, Philippine Islands, on 25 October 1944…”  The citation states that he “supervised and directed the department heads of his ship, assisting them in overcoming many casualties.  His splendid leadership, and his determination to keep the ship afloat and fighting in the face of great odds, served as an inspiration to the officers and crew of the vessel…”

He is also entitled to a facsimile of, and Ribbon for, the Presidential Unit Citation to Task Unit 77.4.3, of which the Kalinin Bay was a part, for the same action.  The citation states that the “courageous determination and the superb teamwork of the officers and men who fought the embarked planes and who manned the ships of Task Unit 77.4.3 were instrumental in effecting the retirement of a hostile force threatening our Leyte invasion operations…”

He reported in March 1945 to the Newport News Shipbuilding and Dry Dock Company, Newport News, Virginia, to assist in fitting out the USS Midway.  He served as Executive Officer of that aircraft carrier from her commissioning, in September 1945 until January 1946.  He was then ordered to report in March for duty as Chief Staff Officer to Commander, Fleet Air Wing FOURTEEN.  In May 1948 he was assigned duty as Director of Armament Tests, Naval Air Test Center, Patuxent River, Maryland, and on April 21, 1950 was ordered to Cabaniss Field, Corpus Christi, Texas, to be Commanding Officer of the Naval Auxiliary Air Station.

Shortly after Korean hostilities began (August 1950), he became Chief Staff Officer to Commander Fleet Air Wing SIX, and in October of 1951, was detached for duty in the Office of the Chief of Naval Operations, Navy Department, Washington, DC.  Under orders of March 2, 1953, he assumed command of the USS Kula Gulf.  Designated in October 1953, Assistant Chief of Staff for Air, to Commander Eastern Sea Frontier, he continued to serve as such unit until his retirement, effective February 1, 1955.