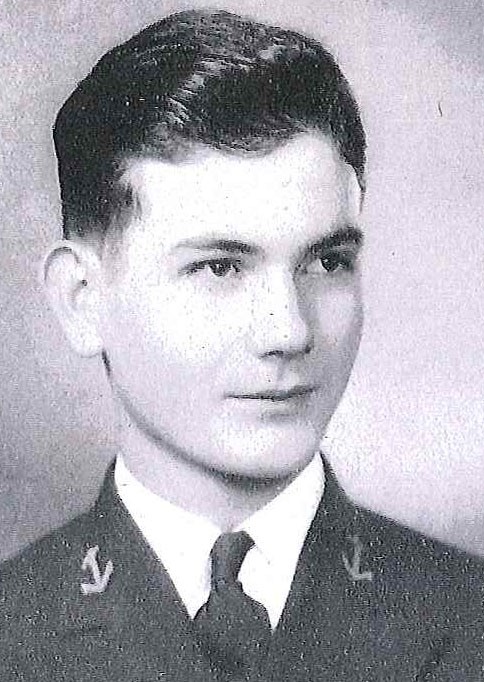 Warren Woodrow Ford was born in Cecil, Arkansas, on November 22, 1915, son of C. B. and Linnie A. (Wiggins) Ford. He attended Shawnee (Oklahoma) High School, prior to entering the US Naval Academy, Annapolis, Maryland, on appointment from the State of Oklahoma in 1933. Graduated and commissioned Ensign on June 3, 1937, he subsequently advanced in rank to that of Captain, to date from July 1, 1955. On July 1, 1957 he was transferred to the Retired List of the US Navy and was advanced to the rank of Rear Admiral on the basis of combat awards.

Following graduation from the Naval Academy in 1937, he reported on board USS New Mexico and in June 1939 was detached for flight training at the Naval Air Station, Pensacola, Florida. Designated Naval Aviator on April 18, 1940, he was assigned in July of that year to Bombing Squadron Five and the next month transferred to Scouting Squadron Six, attached to USS Enterprise. During August and September 1941 he had fitting out duty with Fighting Squadron Eight, at the Fleet Air Detachment, Naval Air Station, Norfolk, Virginia, then joined that squadron upon its commissioning. Deployed to the Pacific area of hostilities, his squadron operated from USS Hornet until she was badly damaged during the Battle of Santa Cruz Islands, then USS Enterprise. Later he had duty with Fighting Squadron Seventy-two, based on the USS Altamaha. “For heroism and extraordinary achievement . . . in action against enemy Japanese forces in the Battle of Midway on June 6, 1942. . .” he was awarded the Distinguished Flying Cross. The citation further states in part:

“Participating in the persistent bombing and strafing attacks against fleeing enemy forces, Lieutenant Ford calmly and courageously pressed home his attack to within perilously short range of his objective, despite tremendous anti-aircraft barrage. . . (and thus) contributed materially to the success obtained by our forces . . .”

He was also awarded a Gold Star in lieu of the Fourth Air Medal for completing five combat missions during the Battle of Santa Cruz and in the vicinity of Guadalcanal from October 16 to 26, 1942 and the Navy Commendation Medal for outstanding service, while operating from USS Hornet, on October 26, 1942 during the Battle of Santa Cruz Islands. In addition, he is entitled to the Ribbon for and facsimile of the Presidential Unit Citation awarded USS Enterprise.

In March 1943 he reported as Fighter Armament Officer in the Bureau of Aeronautics, Navy Department, Washington, D. C. and in June 1944 assumed command of Fighter Squadron Eighty-five, based on USS Shangri-La. He was awarded Gold Stars in lieu of the Second and Third Distinguished Flying Crosses and cited in part as follows:

Gold Star in lieu of the Second Distinguished Flying Cross:  “. . . In action against enemy Japanese forces in the vicinity of Otaru Harbor, Hokkaido, Japan, on July 15, 1945. Leading his squadron on a fighter sweep against enemy shipping, he pressed home his attacks in the face of extremely bad weather and intense anti-aircraft fire to sink or severely damage hostile vessels totaling more than 15,000 tons, all planes returning safe to base. . .”

Gold Star in lieu of Third Distinguished Flying Cross: “...In action against enemy Japanese forces in the Tokyo Area on July 30, 1945. Despite adverse weather and intense antiaircraft fire from ship and shore batteries, (he) led his squadron in an attack on a nest of hostile underwater craft to destroy four and damage two midget submarines and to damage three large submarines, personally sinking one of the midgets and damaging of two freighters and to the effective silencing of an antiaircraft battery. . .”

He was also awarded the Air Medal and Gold Stars in lieu of the Second and Third Air medals and a Gold Star in lieu of the Fourth Distinguished Flying Cross for completing a specified number of missions against enemy Japanese forces and the Navy Commendation Medal for outstanding services on June 2, 1945 at Kyushu, Japan.

In November 1945 he joined the Staff of Commander Air Forces, U. S. Pacific Fleet as Ordnance Material Officer and in June 1946 was detached for instruction in aeronautical engineering at the Postgraduate School, Annapolis, Maryland. From July 1948 to June 1949 he continued his instruction at the California Institute of Technology at Pasadena. He next served as Chief Engineer at the Naval Aircraft Factory, Philadelphia, Pennsylvania and in August 1952 reported as Assistant Overhaul and Repair Officer at the Naval Air Station, Norfolk, Virginia. In April 1956 he was designated Director of the Naval Air Experimental Station, Naval Air Material Center, Naval Base, Philadelphia and served as such until relieved of active duty pending his retirement, effective July 1, 1957.