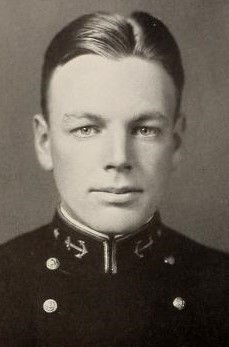 Allan Foster Fleming was born in Iowa City, Iowa, on December 14, 1912, son of the late Burton and Florence Jeanette (Foster) Fleming. He attended New Mexico Military Institute as Roswell, prior to his appointment to the US Naval Academy, Annapolis, Maryland, from the State of the New Mexico in 1932. As a Midshipman he was a member of the crew (Captain his First Class year), and participated in football. Graduated with distinction, eighth in a class of two hundred and sixty-one, and commissioned Ensign on June 4, 1936, he subsequently advanced in rank attaining that of Rear Admiral, to date from October 1, 1963.

Following graduation from the Naval Academy in 1936, he reported aboard the USS Salt Lake City, and in June 1938 was detached with orders to the Naval Air Station, Pensacola, Florida, for flight training. Designated Naval Aviator on July 21, 1939, he joined Scouting Squadron Seventy Two, attached to the USS Wasp, the next month. Returning to the Pensacola Air Station, he was an Instructor there from January to December 1941, and during the early months of World War II had duty in the USS Hornet.

The Hornet was the “Shangri-La” from which Brigadier General Jimmy Doolittle and his flyers took off for the historic raid on Tokyo on April 18, 1942. She subsequently participated in operations at Midway; the capture and defense of Guadalcanal; raids on Buin-Fasisi-Tonolai, and in the Battle of the Santa Cruz Islands. Badly damaged by fires as a result of an enemy bomb hit on October 25, 1942, during the Battle of Santa Crus Islands, the Hornet was sunk by United States destroyers to prevent her from falling into the hands of the enemy. Rear Admiral (the Lieutenant) Fleming was awarded the Purple Heart Medal for wounds received in the later engagement.

After a period of hospitalization, he reported in April 1943 aboard the USS Lexington. “For exceptionally meritorious conduct as Fighter Director of (that aircraft carrier)… during action against enemy forces in the Marshall and Gilberts Islands, from September 11 to 5 December 1943…”  he was awarded the Legion of Merit with Combat “V,” The citation continues: “… (He) brilliantly directed the Fighter Squadron attached to his carrier during engagements with the enemy on November 23 and 24, assisting in the destruction of twenty-nine hostile aircraft and the effective protection of his ship… (He) contributed materially to the development of a highly specialized field of activities of vital importance of the successful prosecution of the war.”

He is also entitled to the Ribbon for, and a facsimile of the Presidential Unit Citation awarded the USS Lexington.

Detached from the Lexington in February 1944, he became Officer in Charge of the Fighter Direction and Combat Information School, Service Force, US Pacific Fleet. He continued to serve in that capacity until December 1945, and the next month reported as Commanding Officer of the U.S Naval Rader Training School, St. Simons, Georgia, with additional duty from December 11, 1945 as Commanding Officer of the Naval Air Station, St. Simons. In March 1946 he joined the Staff of Commander Eight Fleet (redesignated on January 1, 1947, Second Task Fleet).

During June and July 1947 he was assigned to the Naval Air Station, Banana River, Florida, and for the next month had instruction at the Naval Air Station, Jacksonville, Florida. From August 1947 to June 1948 he attended course at the Artillery School, Anti-aircraft and Guided Missiles Branch, Fort Bliss, Texas, after which he had duty at the Naval Air Missile Test Center, Point Mugu, California. He remained there until April 1950, when he assumed command of Air Development Squadron Four. In February 1952 he joined the USS Franklin D. Roosevelt as Operations Officer, continuing to serve in that assignment until August 1953.

Reporting to the Naval War College, Newport, Rhode Island, he completed the course in Naval Warfare in June 1954, and in July was assigned to the Navy Department, Washington, DC for a tour of duty as Head of the Air-Launched Branch, Guided Missiles Division. In June of 1956 he reported for duty on the Staff of the Commander Chief, naval Forces, Eastern Atlantic and Mediterranean at the Headquarters in London, England, where he served as Atomic Plans Officer in the Strategic Navy Planning Division of that Staff.

He was next ordered to the USS Pine Island (AV-12), taking command of that ship in August 1958 in Kaohsiung, Taiwan, at the time when Pine Island was the flagship of Commander, Taiwan Patrol Force. In September of 1959 he left the Pine Island to take over command of the aircraft carrier USS Saratoga (CVA-60) which was then a part of the US Sixth Fleet in the Mediterranean.

In November 1960, he returned to the Navy Department, Washington, DC where he began duty as the Director, Astronautics Operations Division, and served in that capacity until March 1961. He then assumed the duties of the Deputy Assistant for Naval Command Systems, a newly created officer, later becoming Director, Naval Command System Division, within the Office of the Chief of Naval Operations. In August 1962 he reported as Deputy Chief of Staff for Plans to the US National Representative, at Headquarters, Allied Forces, Mediterranean, Floriana, Malta.

“… By his astute judgement and precise direction, he was directly responsible for the formulation of policy that will directly influence the force structure of the United States Armed Forces in the future. As a principal advisor on joint matters (he) has exerted significant and direct influence on the composition and employment of the National Defense establishment. Routinely in contact with the highest-ranking members of the Executive/ Military Community, Rear Admiral Fleming, by his outstanding personal traits of leadership and bearing, has markedly contributed to the Navy’s image at the highest echelons…”

He further served as Commander Maritime Air Forces, Mediterranean, a North Atlantic Treaty Organization command established on November 21, 1968. As such, he was responsible for coordinating aerial surveillance of the Mediterranean Sea by Italian, United Kingdom and United States forces. He also had additional duty as US Country Representative for Italy. In that capacity, he negotiated questions of jurisdiction over American servicemen in regard to Italian law. “For exceptionally meritorious service… from June 1969 to April 1971…” he was awarded a Gold Star in lieu of the Second Distinguished Service Medal. On May 1, 1971 he was transferred to the Retired List of the US Navy.