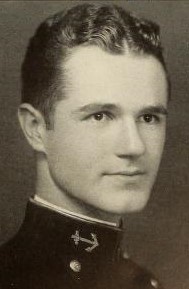 Alto Benjamin Clark was born in Dade City, Florida, on February 23, 1915, son of Darrell and Mabel (Turner) Clark. He attended Staunton (Virginia) Military Academy, prior to entering the US Naval Academy, Annapolis, Maryland from the State of North Carolina in 1934. Graduated and commissioned Ensign on June 2, 1938, he subsequently advanced in rank attaining that of Captain, to date from July 1, 1957.

Following graduation from the Naval Academy in 1938, he joined the USS Philadelphia and in May 1939 transferred to the USS Texas. Detached from that battleship in February 1941, he was ordered to the Naval Air Station, Pensacola, Florida, for flight training. Designated Naval Aviator on August 22, 194, he reported in November on board the battleship Oklahoma to serve with Observation Squadron One. The Oklahoma was sunk as a result of the Japanese attack on Pearl Harbor, December 7, 1941, and he subsequently he had duty with Scouting Squadron 3-D14 at the Naval Air Station, Pearl Harbor. He remained there until May 1943, when he joined Composite Squadron Three. For months later he was assigned to the Naval Auxiliary Air Station, Saufley Field, Pensacola, Florida and in June 1944 became Assistant Superintendent of Aviation Training attached to the Naval Air Training Bases Command, Pensacola.

From October 1945 until February 1946 he had instruction at the Naval Reserve Training Station, St. Simons Island, Georgia, after which he served as CIC Officer on board the USS Franklin D. Roosevelt. In January 1947 he returned to St. Simons Island, where he served for two months as Training Officer. He was Executive Officer of the Naval Air Technical Training Unit, Naval Air Station, Glenview, Illinois, between March 1947 and March 1949 and following refresher training at the Naval Air Station, Corpus, Christi, Texas, assumed command in June 1949 of Patrol Squadron Forty-Eight.

In September 1953 he joined the USS Toledo as Operations Officer and in April 1955 was detached for duty as CIC Systems Evaluation Officer, later CIC Facility Officer, at the Chesapeake Bay Annex, Naval Research Laboratory, Chesapeake Beach, Maryland. He remained there until January 1958 and after refresher training at the Naval Amphibious Base, Little Creek, Virginia, reported in March 1958 as Commanding Officer of the dock landing ship Spiegel Grove.